There’s a little known trick for travellers going to hotels on Bath Road from Heathrow Airport.

The road parallels the runways just to the north of the airport and is stocked with a large range of hotels. The local council has made all the TFL buses which start at Heathrow and head further afield free while they are on Bath Road.

What this means is that if you can get your luggage to a bus stop, you can get to or from the airport for free instead of paying for a taxi or the Airport Hopper buses. The Hoppers will pick you up from the front door of the hotel, but they’ll sting you £4.50 for the privilege.

There are two Sheraton’s on Bath Road – the Sheraton Skyline next to the Marriott (the eastern end of Bath Road), and the Sheraton Heathrow (western end) opposite the McDonalds.

For a variety of reasons I don’t want to get into here I ended up staying at each for a week in each back in October 2015, but this review is from our overnight stay at the Sheraton Heathrow Airport Hotel in May 2018.

The hotel was built in 1971 and the exterior does look a little tired. The entrance has a covered drop off spot, but any glamour is undercut by the cheap outdoor seating of a cafe right beside the huddled forms of smokers getting their nicotine fix. 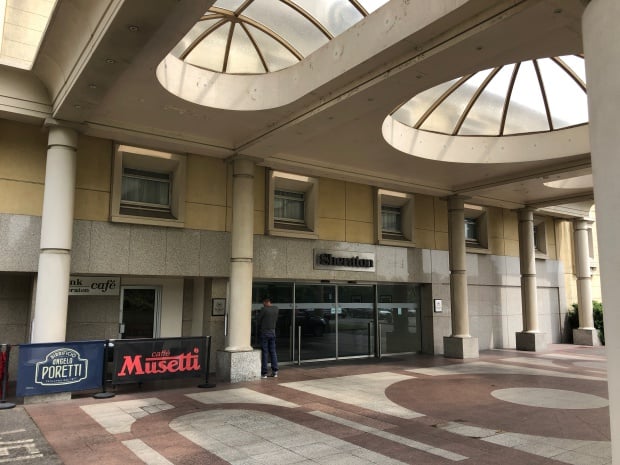 The hotel is built in an atrium style which just means its a giant square ring around a park like interior. 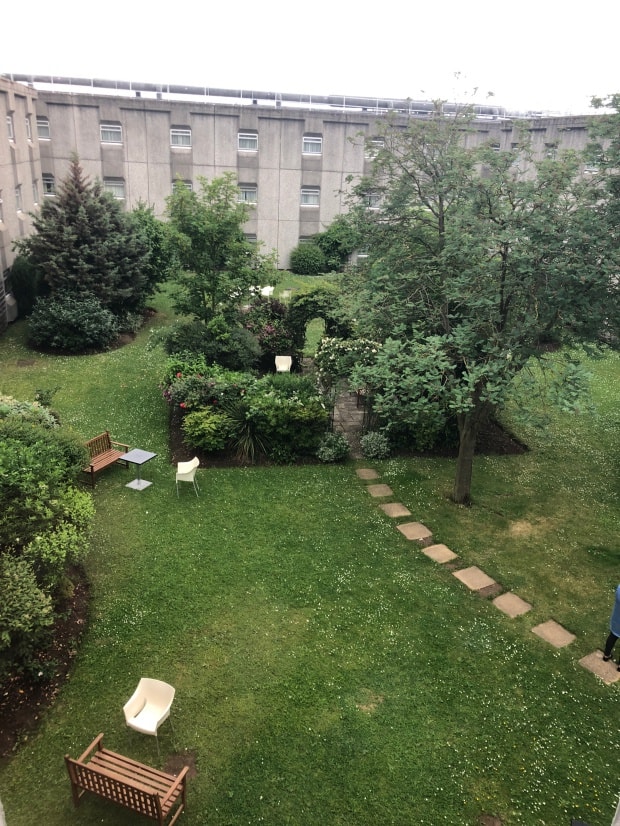 Check-in goes easily enough and we head past a swarm of cabin crew into the interior of the hotel. The inside is a lot nicer than the outside with art works on the walls and bronze and stone statues on plinths down the middle of the corridor.

I make sure that I keep away from them – an overnight flight plus large luggage is a recipe for a sleep-deprivation induced accident with a large price tag!

We hit the lifts and start the trek to our room. There are only three floors and 350 rooms, so there is quite the stroll to get to the room. 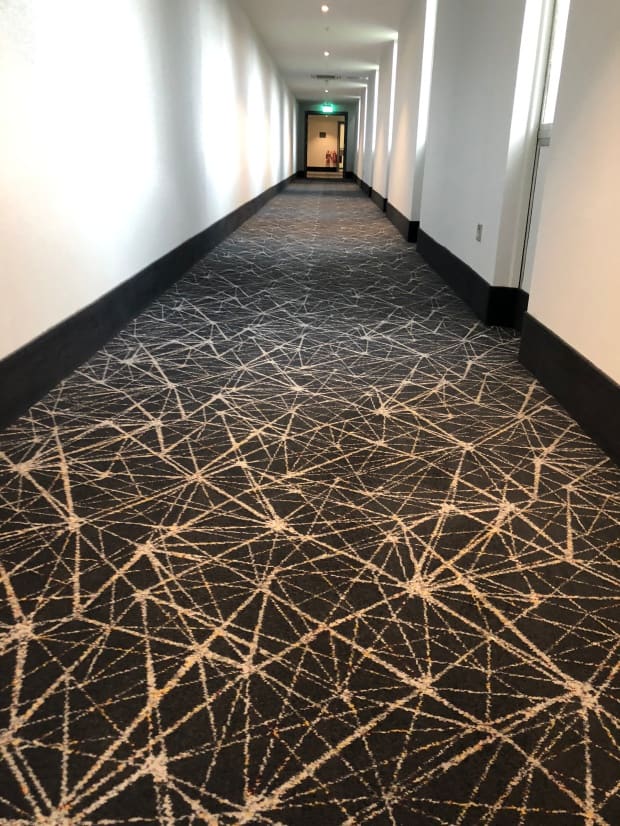 On the plus side though, that does mean we’re facing away from the street and the airport, so have no traffic noise.

The room is large enough, and the decor is definitely not from the 1970s. There’s a padded headboard filling the gap between the ample bed and an enormous mirror. 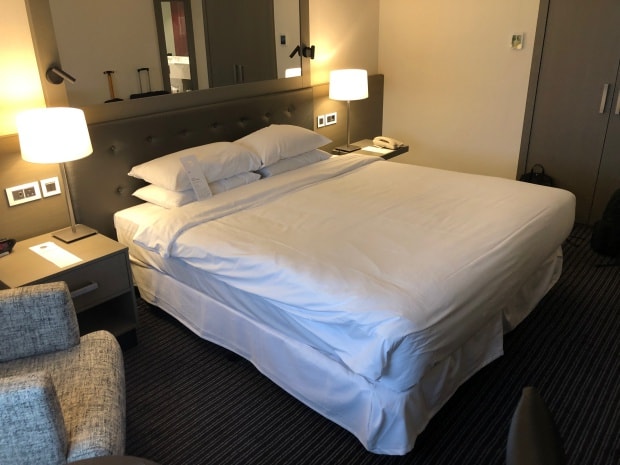 A desk allows you to get some work done and an armchair allows you to read by the natural light of a window which opens a little to allow real air into the room. 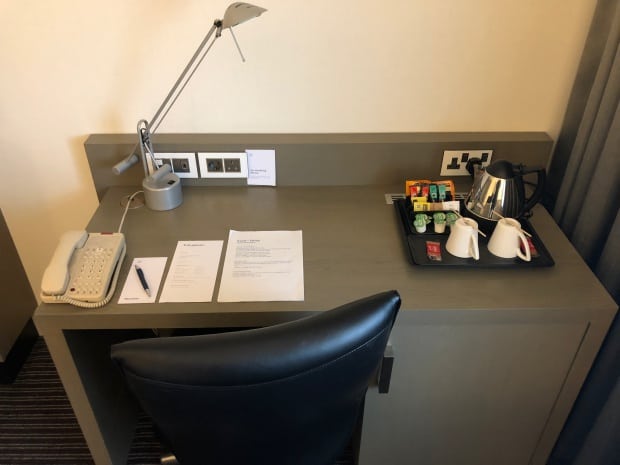 The TV is on a space-saving cabinet which holds the glasses for the minibar and the overall style is certainly in keeping with a modern 4 star hotel. 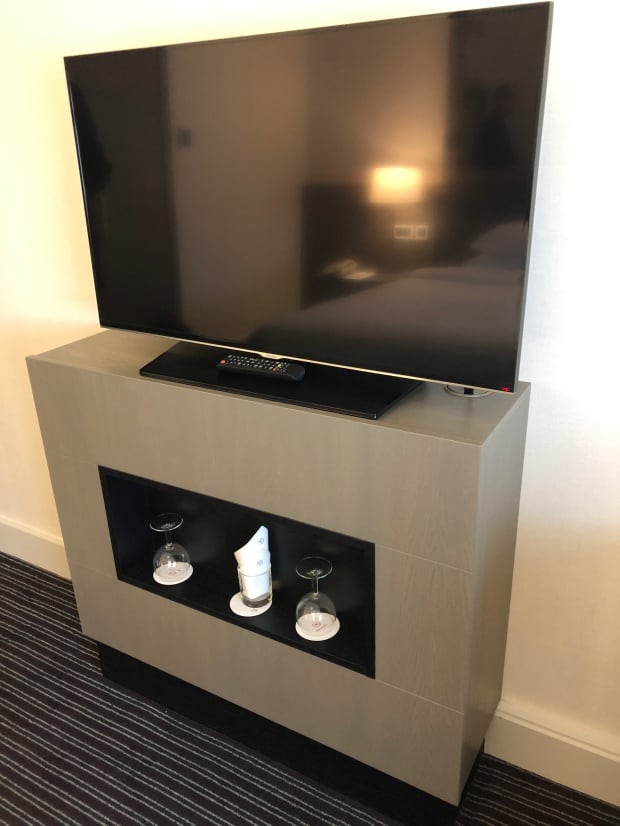 The bathroom is a step up in style in my opinion.  The bold red and white color scheme accentuates the simplicity of the fittings. A step in shower has a no-nonsense shower head, while the toiletries are Sheraton’s own Le Grand Bain range (you can buy them here if you really want). 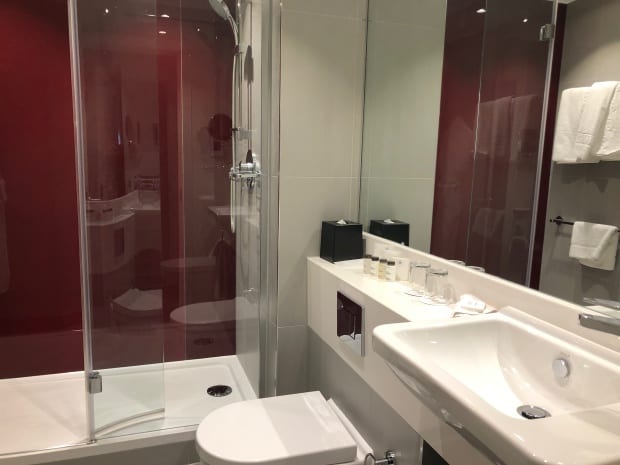 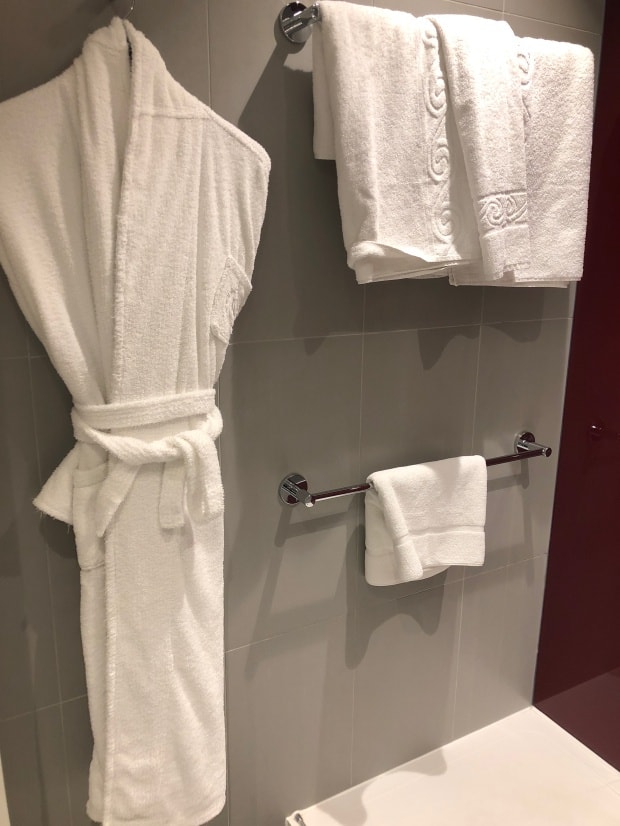 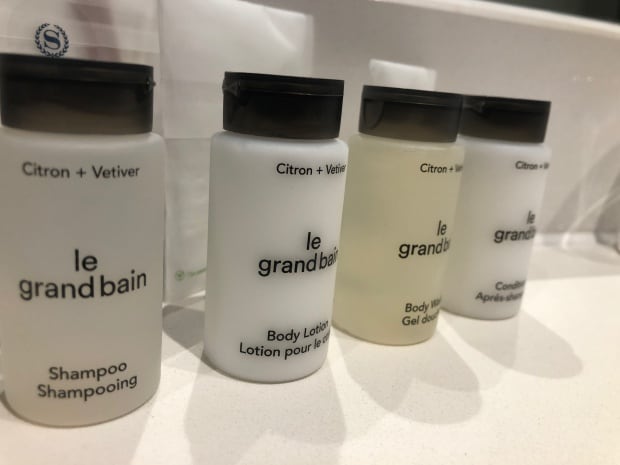 The view out the back is over green fields – a stark contrast to the concrete jungle of the roads and antiseptic airport that you traverse to get there. 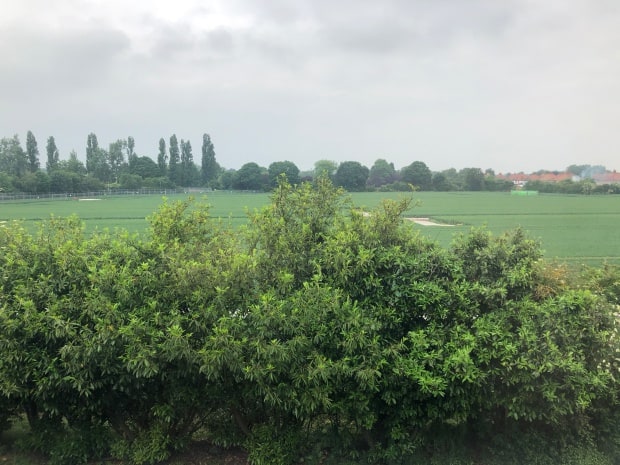 And you don’t even notice that you’re staying next door to what seems like a prison and ends up being IRC Harmondsworth – the place where they hold people arrested at Heathrow Customs and people awaiting decisions on refugee status. Reviews on Google are… mixed to say the least!

To say the eating options are limited is an understatement – there is a McDonalds literally over the road, but the road in question is a dual carriage way with an 80kmph speed limit, so you take your life in your hands both getting there, as well as eating there, so we elected to get room service.

I loved my club sandwich with fries and Ange raved about her spaghetti bolognese. The apple pie with custard finished things off nicely. 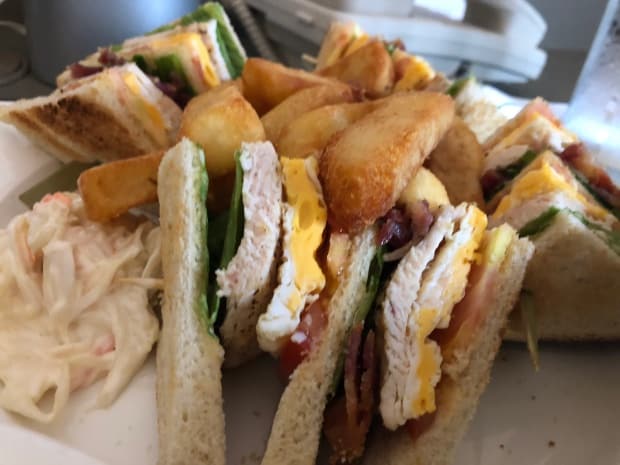 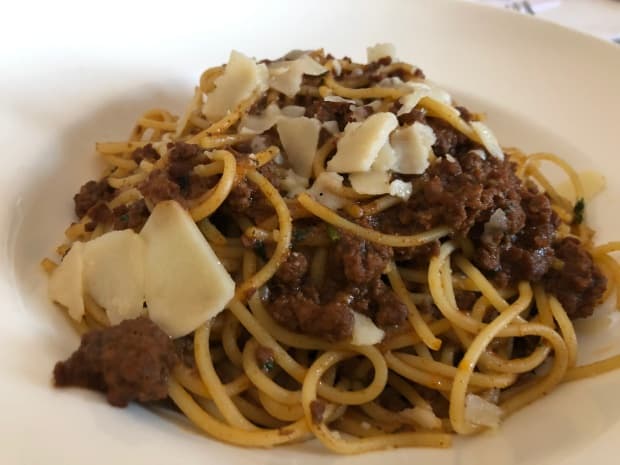 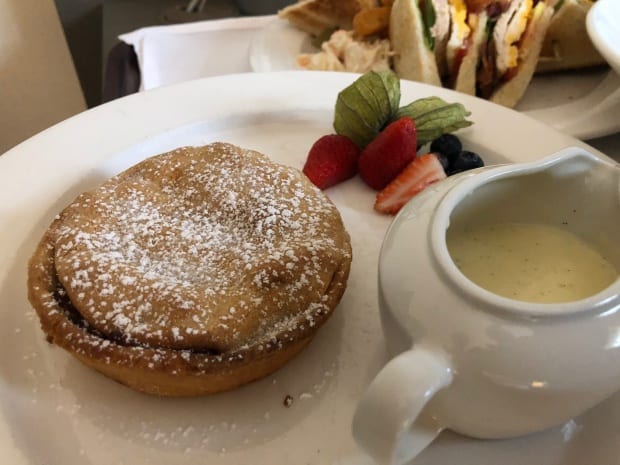 Sure! The hotel is in a great location with adequate facilities and good food. Like any airport hotel when you’re staying there you’re paying for the proximity of the airport, so on that basis the Sheraton certainly delivers. 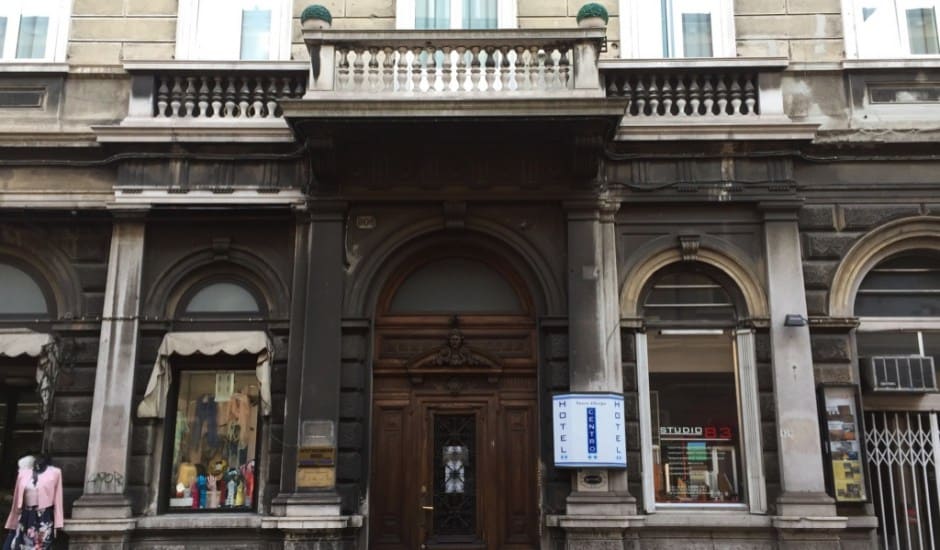