Our last night in Vienna was at the Boutique Stadthalle, a stone’s throw away from Westbahnhof and, therefore, imminently accessible from everywhere on Vienna’s impressive public transport system. We’d noticed that the Stadthalle promoted itself as an eco-hotel and we were interested if it was possible to combine being eco-friendly with comfort. It’s easy to be cynical with regard to hotels labelling themselves “eco” to cash in on the increased interest in protecting the planet, but Stadthalle have certainly proven themselves as walking the walk judging by their many awards over the years.

I had been focusing on the other aspects of our trip, and so didn’t have any expectations for the hotel room. First impressions were good as we dropped off our luggage at 10am (rooms are rarely ready that early!) – the front doors formed an airlock and a wall of greenery set the scene for the eco theme.

There was a funky contemporary vibe with the decor in the lobby and we were given the key to the luggage store in the basement and dropped off our baggage. A cool little pouch of lavender was in the lift, nicely scenting our descent. We didn’t come back ’til quite late in the evening and retrieved our luggage, collected the key and headed up to the room. I did notice that it was on the top floor, but that didn’t strike me as out of the ordinary.

I don’t know if you’ve ever done this in a hotel: you open the door and you have an expectation of where the wall opposite will be. It establishes how big the room is. When we opened the door the room seemed to go on and on. It dawned on me that they had upgraded us to a junior suite at about the same time as Ange figured it out (it had been a long day!).

And what a room it was! It had a fold out couch tucked away in the corner in case you had kids, and a lovely balcony overlooking the courtyard far below. While it was dark when we checked in, in the morning light we had a great view of the solar panels on the wall and roof opposite, the large beds of lavender (a pity we weren’t there when they were blooming) and rooftop beehives. Serious eco-credentials there!!

The bathroom had a corner window into the rest of the room, and the light switches were hi-tech and well labelled. According to the evacuation maps, our room took over almost half the area of our floor. A most unexpected and welcome upgrade! Free apples plus a kettle and tea making facilities were nice surprises – maybe it’s becoming more common on the continent to include these in the room?

Even though the hour is late, it would be a waste not to utilise the bath and so we put some of the shower gel in to make bubble bath. It feels good to let the hot water release the tension of the day.

I’m used to vegans and celiacs not being able to find anything to eat at hotel buffets: not the case at the Stadthalle! There is something there for almost everyone (the only thing missing was bacon) and the food is well-labelled and clearly indicates whether it’s organic or not. there are even eggs three ways – scrambled, hard and soft boiled.

There’s time for us to have a bit of an exploration through the hotel after breakfast, and we’re glad we did.

Outside the breakfast room is a lovely courtyard – it’s a pity the weather is a bit inclement – when the sun is out it would be an awesome spot to eat or relax in the evening over a glass of wine. The garden meets the walls covered with ivy giving the impressions that you are surrounded by green in the middle of the city. Very relaxing!

On each landing between floors there is a feature wall with colour changing lighting in what Ange assures me are those eco friendly LED bulbs. On one landing are pillows, on one ceramic mugs with a single toothbrush, on another empty wine bottles. We’re trying to guess what will be on the landing for our floor as we ascend, but an empty wall with non-coloured lamps greets us instead. A bit of a let down after the funky styles of the other floors!

Absolutely! Its great when the hot water is heated with a hotel’s very own solar power, and I would love to try the honey at breakfast now I’ve seen where it comes from. The lavender in bloom would be something to see also.

Boutique Stadthalle supported our Summer 2017: UNESCO tour by providing a complimentary stay. All opinions remain our own. 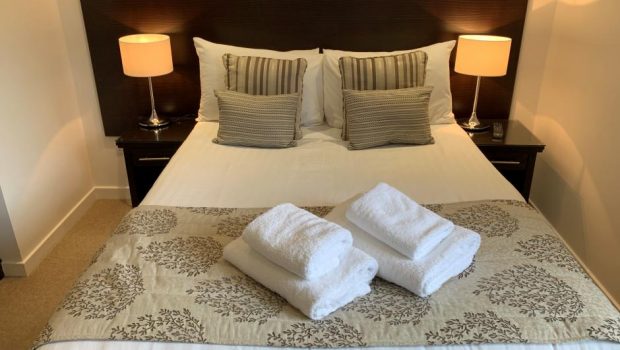 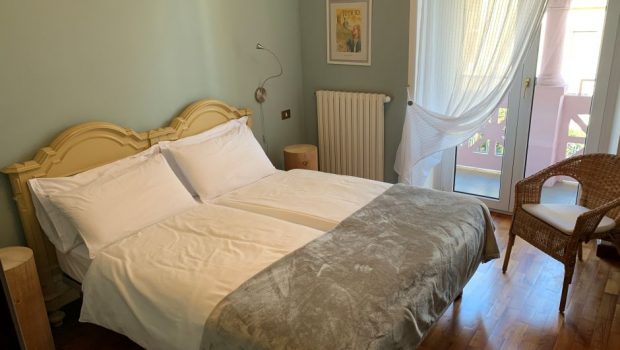