The Langham on the corner of Karangahape Road and Symonds Street was a landmark hotel in Auckland’s CBD that hosted the creme de la creme – a favourite for visiting pop stars and celebrities visiting the city.

Prior to being bought by the Langham it was a Sheraton, so has long enjoyed existence as a premium hotel. In 2017 it was rebranded as the Cordis and my mother went along to see what staying there was like.

As you’d expect from a 5 star hotel, the service begins as soon as you arrive with Mom’s luggage being pounced upon by the doorman as soon as we got out of the Uber at the front door.

The entrance foyer is suitably flash with a chandelier above the waiting couch and checking in goes smoothly. The staff are friendly and efficient, adjusting quickly once they realised my mother was checking in and not me. 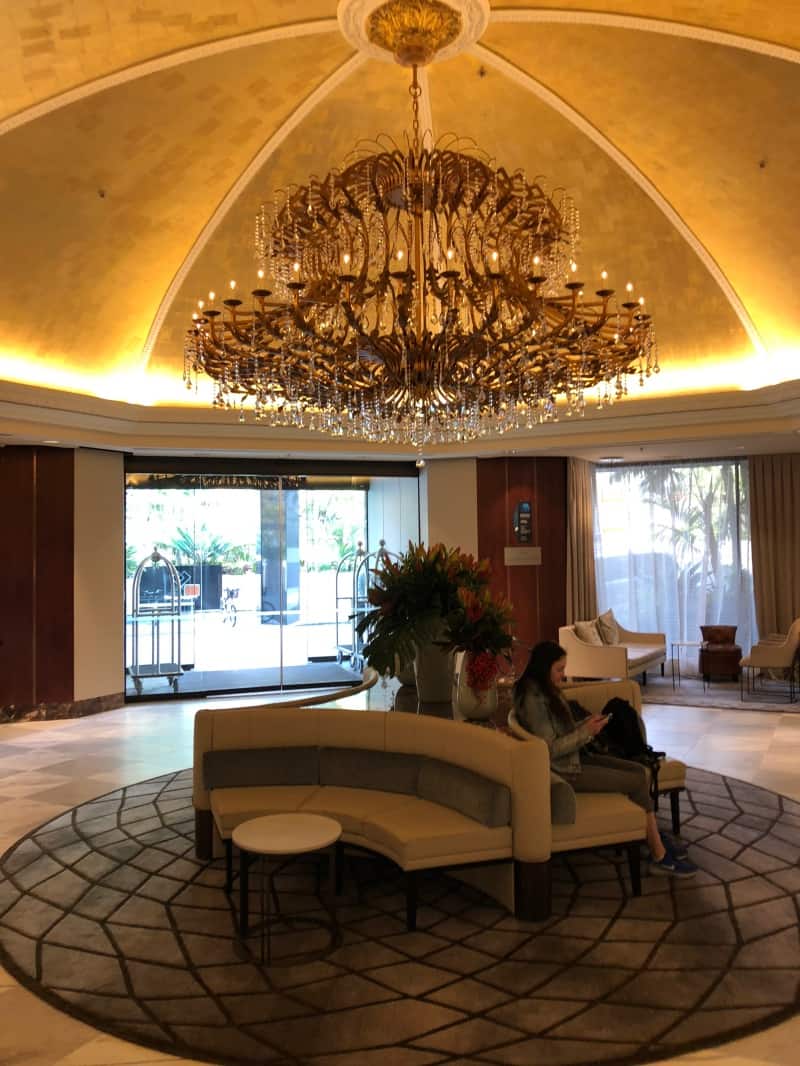 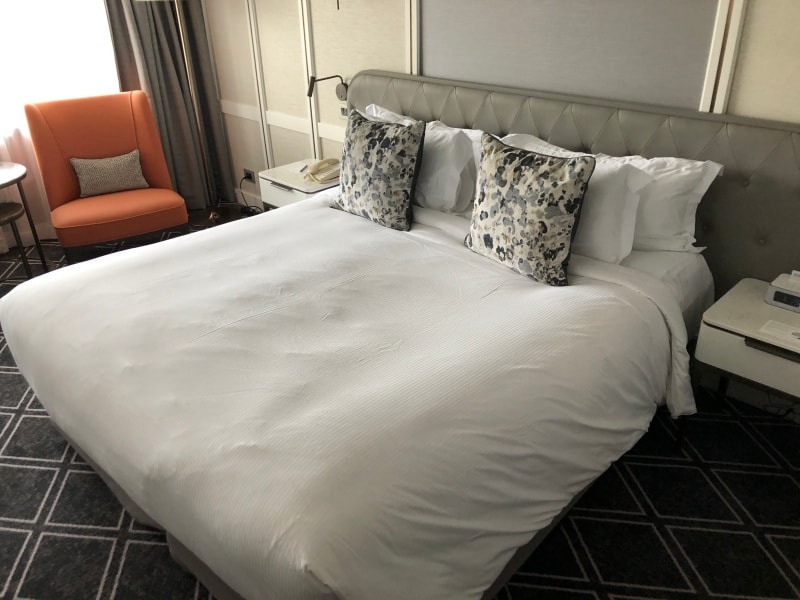 Formalities over we headed upstairs to check out the room. Mom and Ange sat at the table and chatted while looking out the window while I flicked the big screen TV on and flopped onto the bed. The bed was absolutely huge and super comfortable – like lying on a cloud.

Mom backed that up in her post-stay debrief: she said that the bed “was not too soft nor not too hard, just right”.

After a quick look through the channels I got bored and had a look around the room. 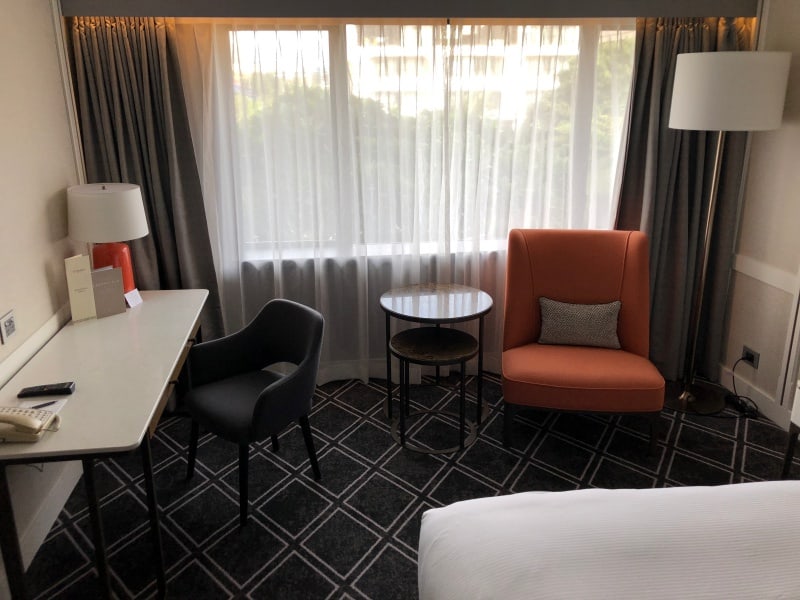 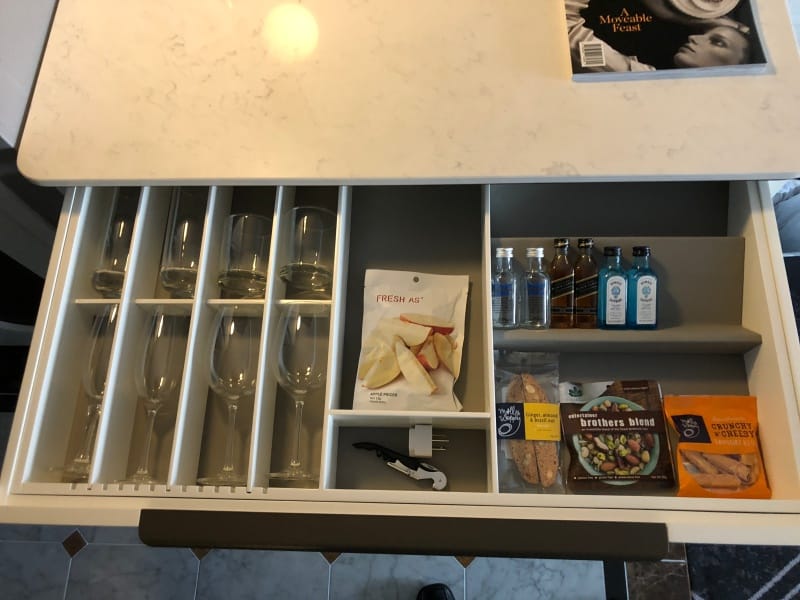 The mini bar was actually squirrelled away in large drawers which pulled out to reveal glasses and snacks. A bottle opener and power adapter were nice additions, as were the comprehensive array of coffee, teas and hot chocolates in the neighbouring drawer. The cupboards revealed the usual amenities: iron, ironing board, safe and robes etc. 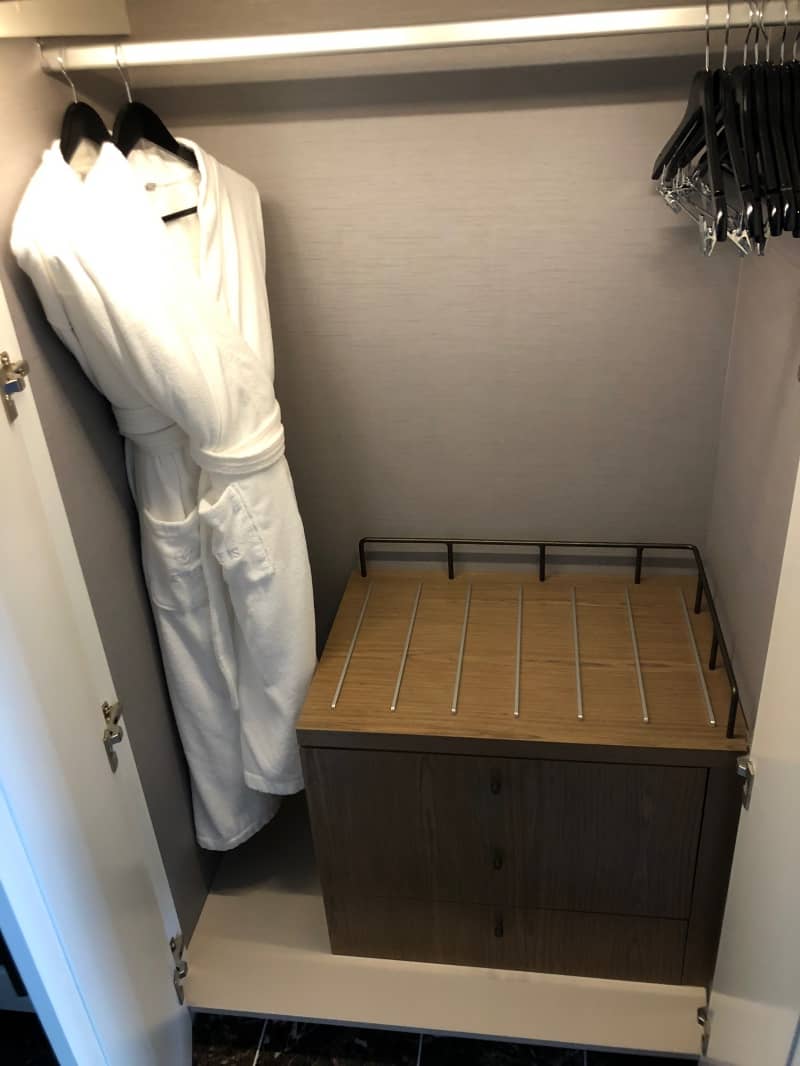 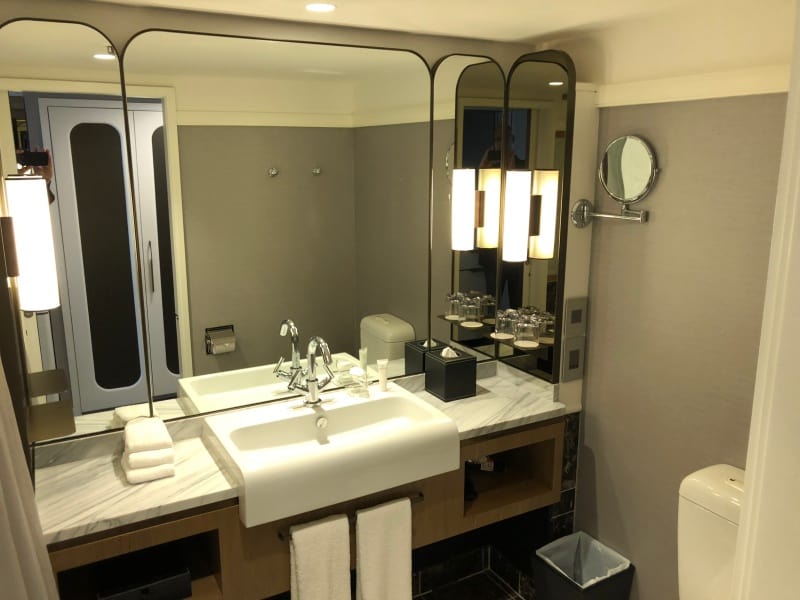 The bathroom was very brightly lit with a two headed shower over a full bath. My favourite rainforest shower head alongside one which could be hand held.

Mom said “it was easy to use, and easy to get the right temperature”. 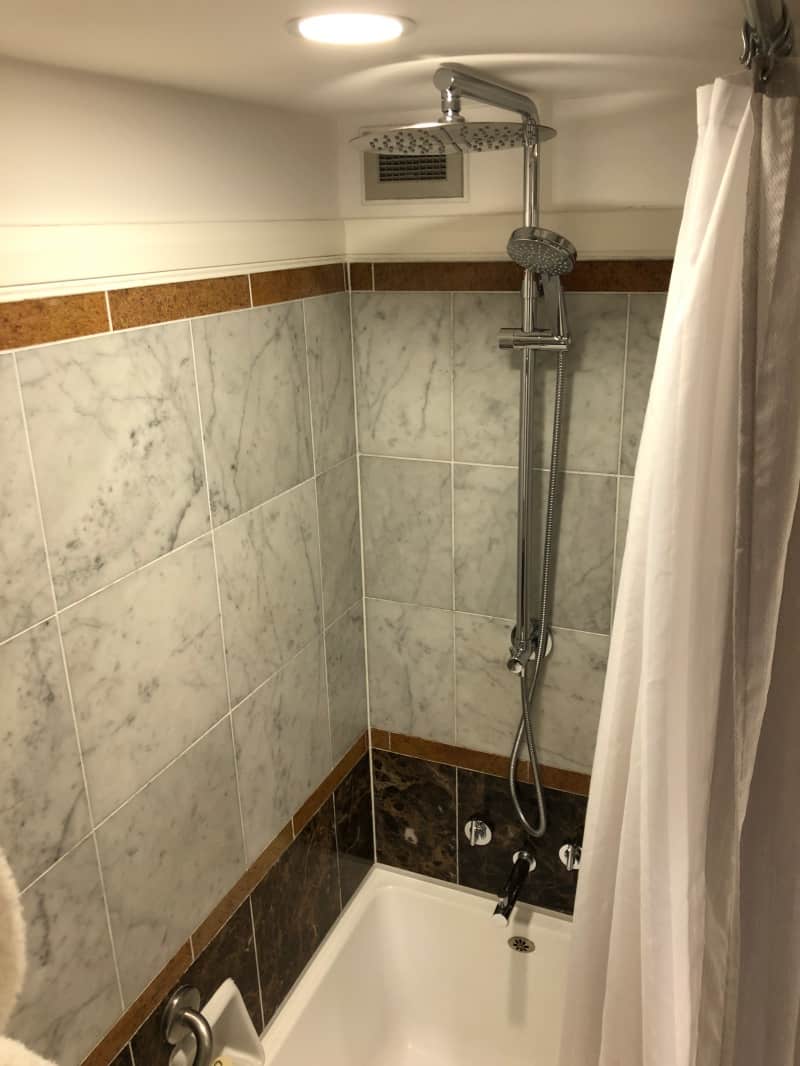 Each power point in the room was accompanied by a USB port – continuing a pattern I had seen in other top end hotels. Another feature I’d noticed recently was the pillow menu, and the Cordis had a selection of seven to choose from. 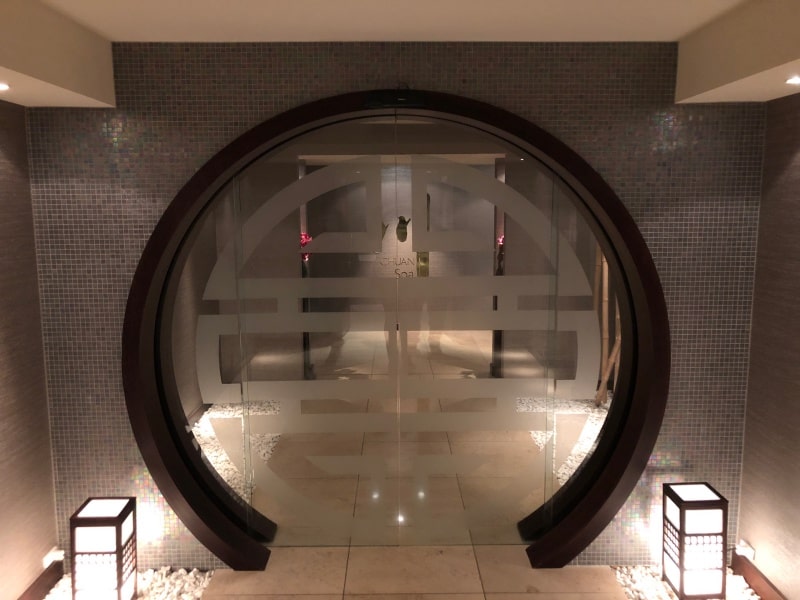 We had a little time before our High Tea appointment, so we went out to scope out the on-site Chuan Spa where Mom had booked herself in for a massage the following day.

We found the Spa beyond sliding glass doors and up a long flight of stairs. Just around the corner was the lift so I hit the call button and waited. And waited. I pushed it again, but still no lift. 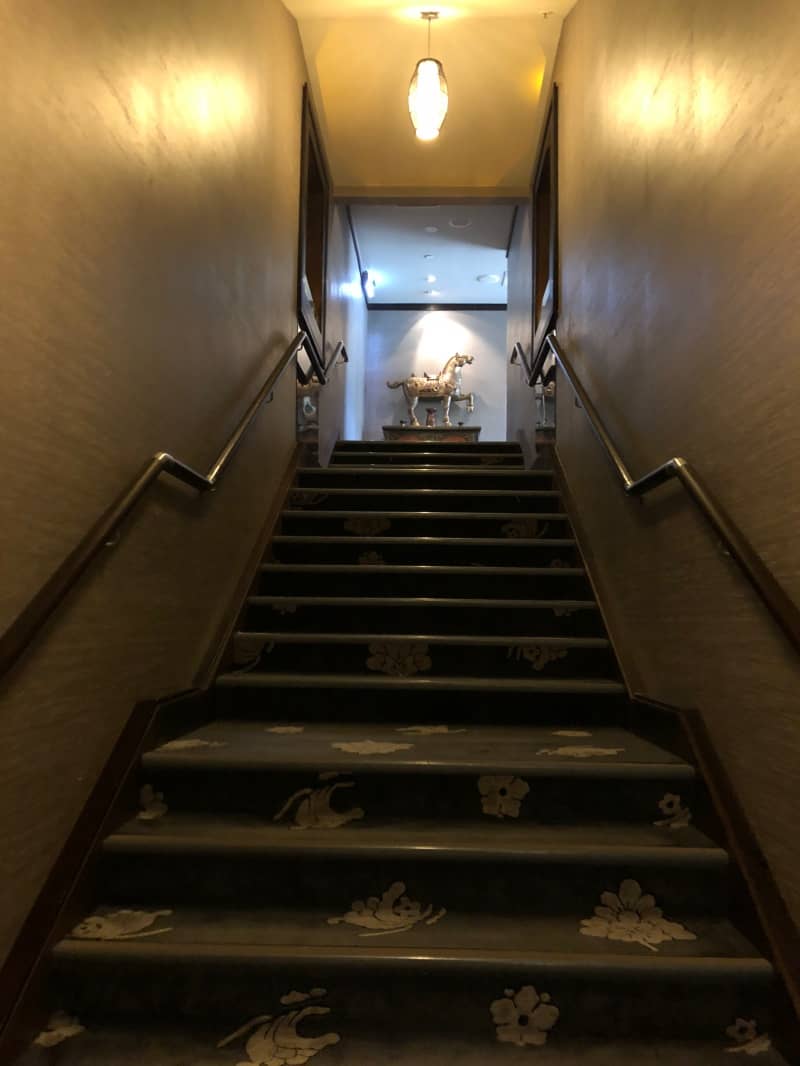 Ange went back around the corner and up the stairs to send the lift down but discovered that it was broken (why no sign?). She mentioned to the receptionist that Mom would need it for her appointment the next day.

As she left to join us for the High Tea she heard the receptionist talking to someone on the phone, arranging something special for Mom. I’ve had a few High Teas with Mom in London (dutiful son that I am), so I was keen to discover how the High Tea by Cordis stacked up.

High teas began in the 1840s to fill the gap between breakfast and the evening meal and the custom has been taken over by high-end restaurants and hotels in an attempt to discover just how much people will pay for a cucumber sandwich with the crusts cut off. 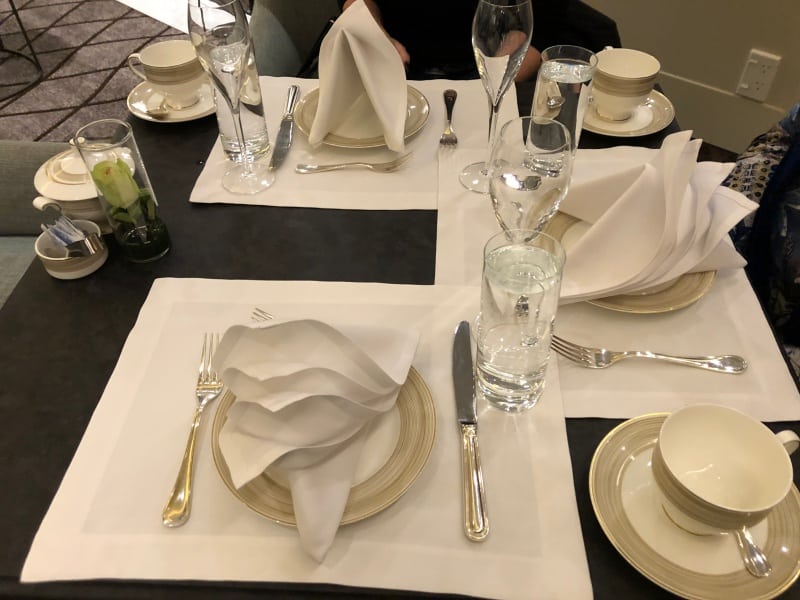 Our server was very knowledgeable and had the gift of the gab. She walked us through what was on offer for the $74, including making a fuss of Mom and upgrading her to the package which included a glass of champagne when she found out that Mom was a guest at the hotel.

The High Tea in the Lobby Lounge consisted of two drinks (tea by the pot or a non-tea beverage), soup, some scones, sandwiches, and desserts.

The teas on offer were extensive and exotic, and some so exotic that they would attract a $5 surcharge per pot! 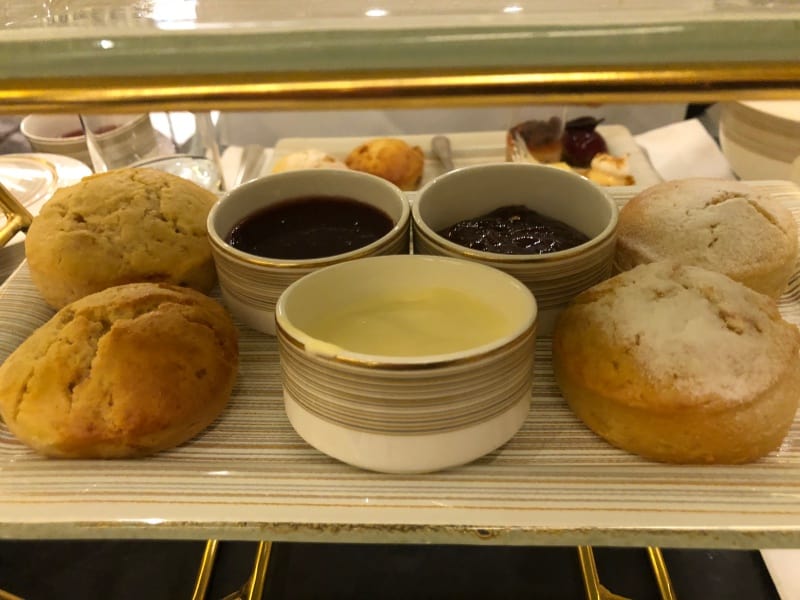 The food was served on a tray of multiple levels, attractively presented for two. Ange had to make do with hers on a normal plate, not nearly as regal!

The offerings I’d had in London had been basic but done well and unlimited repeats allowed – but the Cordis offered very haute couture versions of things: beetroot jelly, salmon custard, that sort of thing.

When they were good they were very good, but very often they…weren’t to my taste. Impossible to fault the service or presentation though. I did manage to sweet talk my way into another ham sandwich though! After we’d eaten our fill we headed back up to drop Mom off at her room and headed home. Waiting under the door was a letter, plus an electronic version on the TV, apologising that the lift to the Spa wasn’t working and that special arrangements had been made to escort her to the Spa. Could she please make herself known at reception and a staff member would assist her to the Spa.

Mom reported back that she’d enjoyed the room service dinner of a chicken wrap with wedges (“most delicious”), but hadn’t gone to the breakfast because it cost $45 pp.

I guess it wasn’t too much more than £15-17 I would expect to pay in the UK, but it’s very hard to eat enough to justify that. I found out that the breakfast went on for quite a few hours so maybe making a morning if it and reading the newspapers while grazing on the buffet for a few hours might begin to approach cost effectiveness.

We’d arranged to catch up with Mom for dinner on her last night and find out how everything had gone.

Our table was beside the piano overlooking the bar where we’d had high tea, and while we waited for a waiter Mom told us about the Spa experience. Apparently she’d been escorted through some of the bowels of the hotel to a different lift which ferried her up to the Spa where she enjoyed a great full body massage, followed by a swim and laying by the pool and then some room service, very relaxing! When she was done they lead her back to reception for her to make her own way back to her room.

We had plenty of time to ask questions as it was difficult to get the waiters attention. When we finally did, we managed to get some cocktails, though at $20 a pop they were a bit watery and disappointing. Ange’s one was difficult to drink with the amount of fruit pulp in it. Thicker straw perhaps? Mom loved hers though! Lush!

The slowness of the service was the only downside of what was a quite lovely dinner. I had the burger, while Ange had the mushroom roulade with a side salad which she praised glowingly. My burger came with a small stack of thick cut chips, arranged in a similar fashion to a game of Jenga, so I didn’t know if I was to eat them or try and extricate them one at a time as in the game. Mom had the sliders and sweet potato fries and loved it too. Presenting them in the little deep fryer basket went down well.

The dessert was great: I had the shortcake with honeycomb and apparently the flowers adorning it were edible too. Mom had the trio of ice creams. Burping gently to myself, I managed to get the attention of the waiters so we could get the bill. I actually ended up having to go down to the bar where two of the waitresses were having a very in-depth conversation in order to pay. They had the good grace to jump and look sheepish when they noticed my approach, obviously too engrossed in their conversation to see me!

Mom checked out the following day, happy to have stayed at the Cordis and the opportunity to pamper herself a little.

In her words, the “service was impeccable, friendly and efficient. Can’t praise it enough! The whole 5 star experience”.

Ange and I were glad to have shared at least some of the experience – High Tea and dinner out were good exposures to how the Cordis operates.