We counted the other passengers at the bus stop. I went over and asked the attendant how big the shuttle bus to the Marriott was.

He looked down the line of the passengers waiting outside the Arrivals area of Terminal 2 at Ninoy Aquino International Airport and assured me that there would be enough room.

I thanked him and went back to where Ange waited by our luggage. Thirty degree heat, a constant stream of beeping taxis, buses and motorbikes, a day and a half awake on various flights plus another hour’s wait for the shuttle to return if it was full was making me just a little anxious.

We were using the Marriott as a chance to get some real sleep before our onward flight the next day, encouraged by the fact that it was adjacent to the airport.

When the shuttle came we were relieved that there was in fact enough room for everyone and settled into the big comfortable leather chairs while the driver navigated the chaos of airport traffic. 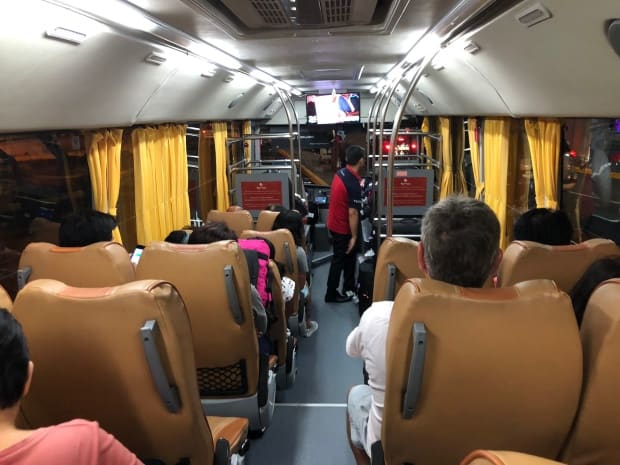 We weren’t the only hotel being served by the bus, so kept one ear out for the driver announcing the stops, but they were very clear and ensured they knew where everyone was going as the boarded and as they left the bus, leaving nothing to chance.

After what seemed an aeon to my sleep addled brain but which was much more likely 30 minutes, we pulled into the imposing driveway, disembarked, collected our luggage and made our way to the entrance of the hotel. 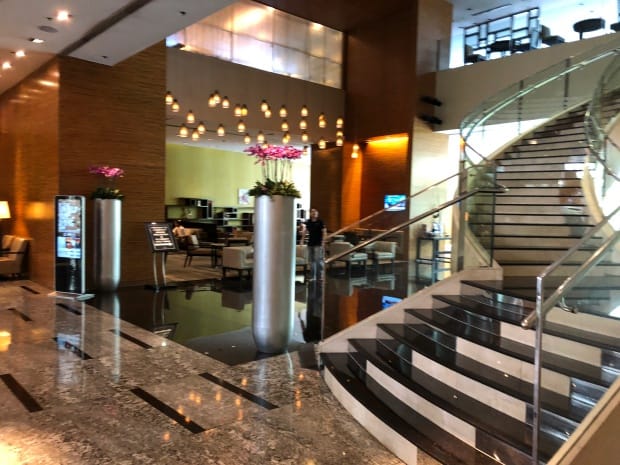 It was big and impressive, with lots of polished marble. We checked-in without any issues and headed up to our room.

We’d only paid £50 (NZD 100), so even though it was a Marriott, I thought it would be a typical airport hotel – short on style and amenities and long on convenience. I was a little shocked at the reality. 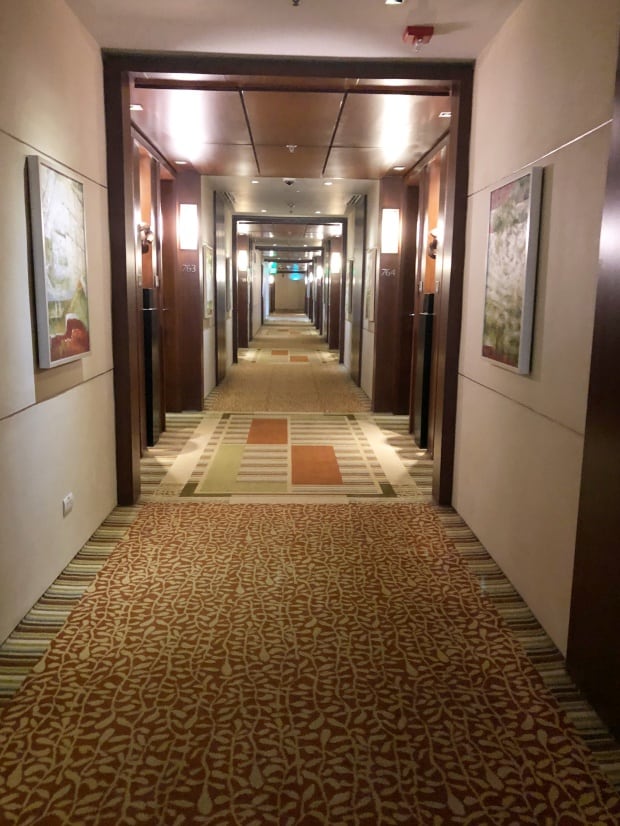 I think we might have been upgraded to a suite – there was a short hallway immediately through the door, with a toilet immediately to your left. The lounge opened up after that with a glass desk dominating it. 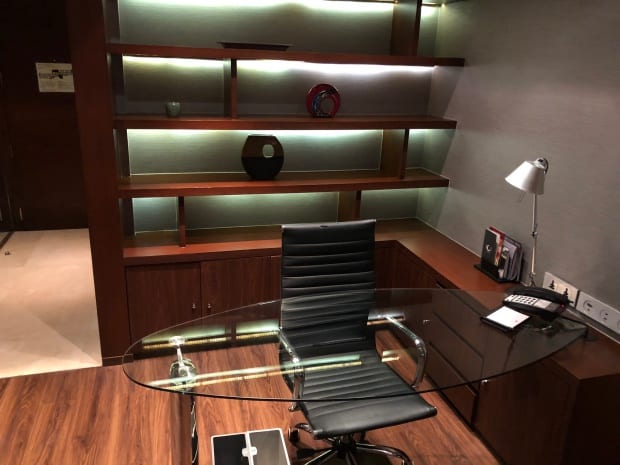 The first of two TVs faced a standard couch and armchair while a welcome dish of fruit sat on the table. 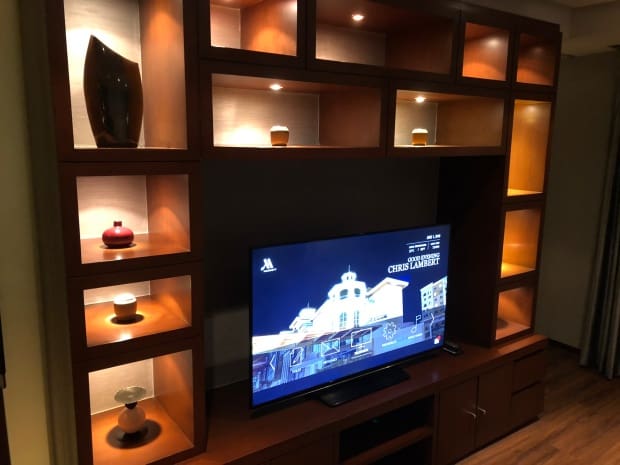 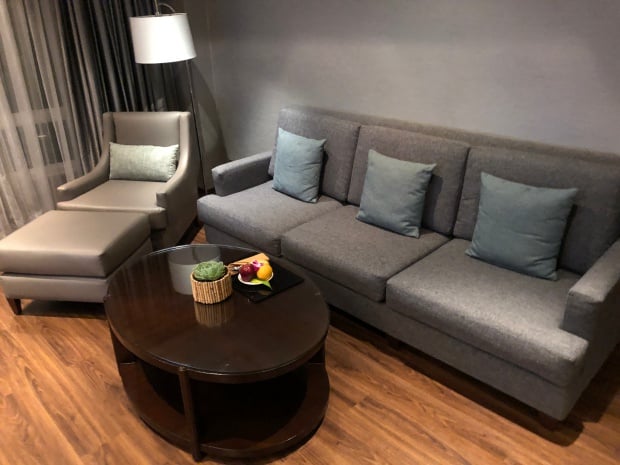 Through one of two doors on either side of the TV was the bedroom, with a very large king-sized bed plus a little armchair and the second TV. A glass wall allowed you to see into the wet room beyond – which had both a shower as well as a full-sized bath. There were two shower heads, including a rain forest one built into the ceiling. The wet room was accessed via the bathroom which had his and hers basins and separate toiletries, plus the other toilet tucked discretely in the corner. The place was decidedly huge! 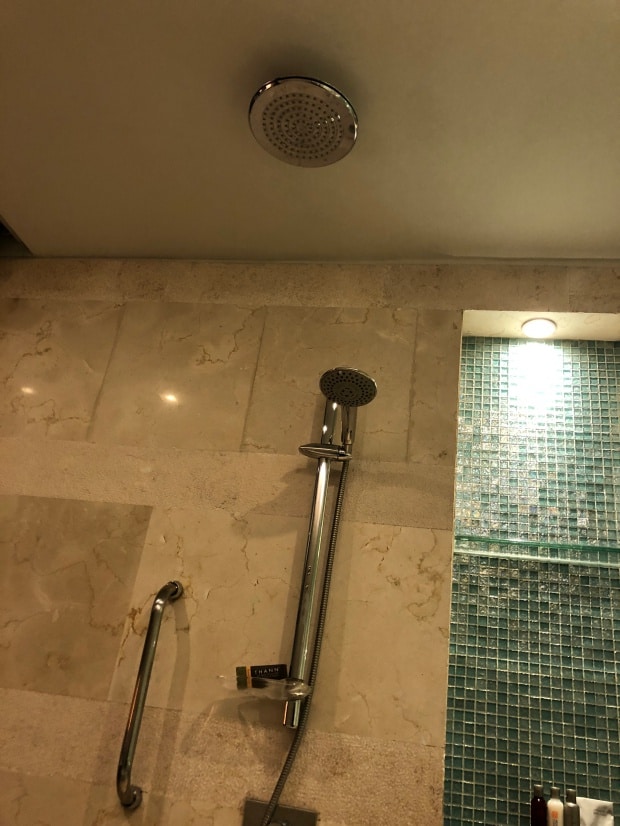 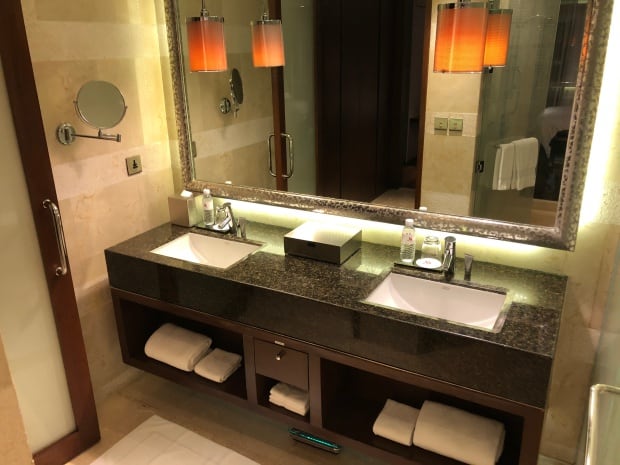 We decided to wash away the grime of our flights and then get some room service which turned out to be a really good idea.

I got the Po’Boy which is just a bun with deep fried prawns and some coleslaw accompanied with fried potatoes, while Ange got prawn noodles with egg which she still raves about 6 months later. I don’t know if it was all the changes in time zones or the fact that we could taste things again after hours in an airplane, but the meals were delicious!

After a great night’s sleep we headed down for breakfast.

The size of the hotel meant that the restaurant in the morning was well and truly full but they managed to find a table or us, admittedly very closely located to our neighbours. The food on offer was amazing in its breadth – an education in everything people from different Asian countries and cultures could have for breakfast. 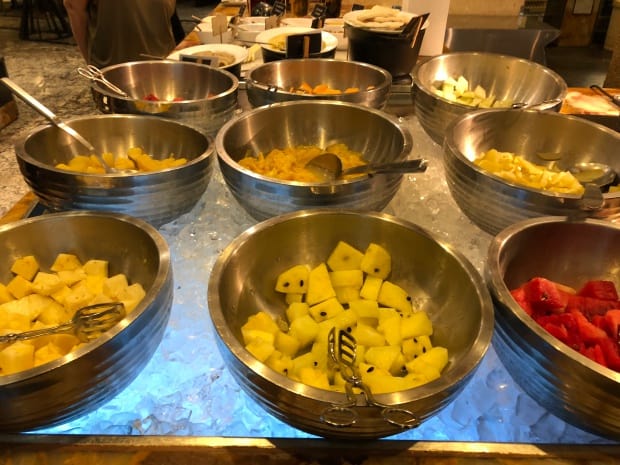 There were a few nods to the traditional European palate, but I was fascinated by just how much variation there was between the Chinese, Filipino, Indonesian and Malay cuisines.

After returning to our room to brush our teeth, we headed back down to the reception area to check-out. We then asked about getting a taxi to the airport.

The doorman seemed reluctant to get a cab for us, instead suggesting it would be better to get the local equivalent of an Uber. We agreed, especially if it would be cheaper, and asked how we could pay for that.

After being told that it would have to be cash, I headed back inside the hotel to get some cash out of the ATM only to discover that the ATM wouldn’t dispense any cash. I double checked the slot that you put the card in to ensure that there was no attachments or anything that looked dodgy, but it just didn’t seem to want to give any cash out. Ange tried and she had no luck either.

I asked at reception if there was any other ATMs and was told that there was a bank in the casino attached to the hotel. A brief sprint down the corridor lead me to a security checkpoint and then I was into the casino and an actual bank branch.

The ATM there had no trouble dispensing local currency but much more than I was hoping it would – the last thing I wanted to do is be left with a whole bunch of local currency I wouldn’t be able to use (6 months later I’m staring at the purple bills in my wallet, so a fear well justified).

Then a sprint back to the doorman to find that the Uber hadn’t arrived yet. Twenty minutes later he beckoned and we found that the driver had arrived. You certainly need a lot of elbow room when planning around Manila traffic!

We got into the car and the driver asked if we were a certain name. We frowned and said no, and started to get out of the car. The doorman came back over and told us that he’d ordered the Uber using his app so that the driver thought we were him, and that it was fine.

Relieved that we hadn’t accidentally stolen someone else’s car, we got back into the car and headed into the chaos of the traffic.

In an instant. The Marriott is perfect for accessing the airport whether you’re arriving, departing or just in transit. Leave lots of time to get to or from the airport and enjoy the calm comfort of the hotel. I’m just disappointed that we weren’t there during the day because the rooftop pool looks very enticing from the pictures.