From the moment we arrived we knew we were in for something special. The walk from the train station had taken ten minutes in the cold and we knew the 25hours Zurich Langstrasse was nearby, but when we rounded a corner among the high rise central city office blocks, we weren’t prepared for a kaleidoscope of colourful neon.

We should have known that the 25hours would stand out after our visits to the sister hotels in Berlin and Vienna, but we were even more surprised by the party going on in the bar area beside the reception.

One eye on the festivities, we checked in and almost missed Nathalie informing us that breakfast would be served the following morning from 7:30 to 10:30. Crestfallen, we explained that we would have to leave before 7am because we were catching a train (and we knew just how good the breakfasts at 25hours were!).

Quick as a flash she indicated that she’d have a takeaway breakfast waiting for us when we checked out – obviously not as good as what would be on offer in the restaurant (my fond memory of the honey comb at both Berlin and Vienna surfacing here) but it should stop us from starving on the way to Chur.

Satisfied that breakfast was sorted, we headed up to our room, aiming to go straight to bed. The room as usual was a delight. The clean space belied the stylish touches hidden around and, as usual, Ange and I called out the interesting elements as we found them, oohing and ahhing as each became apparent.

A lovely welcome note with a chocolate bar and an interesting Valentine’s Day gift (I checked: they were breath mints not Viagara!) were waiting by the bed, and tucked into the corner was a little table and chair with a colouring in book and coloured pencils.

The bedside area was well appointed with a bunch of reading material pegged to a rail over the bed. A stuffed toy perched on the rail, and the light switches included a USB charging station. There was also a USB speaker system if you wanted to party in the room

Speaking of partying in the room: this is one room you don’t want to share with your boss. The shower was encased in glass allowing an intimate demonstration of your fellow guest’s bathing habits. If you wanted privacy there was also a translucent curtain separating the bathroom from the bedroom.

Also in the open plan bathroom was a very well lit mirror over the basin, and on the opposite wall a full length mirror allowing the reflections to have reflections ad infinitum.

The toiletries were STOP THE WATER WHILE USING ME!, a range of 100% biodegradable natural cosmetics, based on natural essences and oils.

The original plan was to head straight to bed upon arrival, but that’s just not possible with the 25hours – we’d seen the party in reception and when we discovered an old time Polaroid camera we headed off to check out the amenities and the action.

The gym on the top floor had a chill out room overlooking the railway lines next door. Behind the chill out room was the gym, and alongside that was the plunge bucket and shower which supported the sauna. Apparently good sauna process is to periodically leave the sauna and plunge into a tub of cold water or leap into a snow bank.

But we werent here for saunas, and so headed back downstairs where the fun was.

The area around the bar was rammed with the cool, the trendy, the hip… and us. We made our way through the crowds to get a feel for the space. In one corner the DJ was rocking the beats, and tucked into each seating area earnest conversation and seduction was going on. An area was roped off for a private party and one patron had escaped the revelry in her own private nook.

Upstairs was a chill out area with some video games and a pinball machine, and on the wall were a bunch of polaroid photos, obviously we weren’t the only ones wandering around with a Polaroid!

Speaking of which, if you ever want to feel like a hipster, head over to the coolest party you can find with an old school Polaroid camera and take a bunch of selfies. Awesome!

Back to the Room, perchance to sleep

The lifts at 25hours hotels always have something funky going on: a slogan or video or animation or something cool. And the room numbers are also a way to explore their creativity

But my favourite point of differentiation is definitely the Polaroid – a portable photo-booth with old-school charm.

Bright and early the following morning we got up, showered and checked out. We made to go into the dining room only to be told that they were still setting up. We explained that Nathalie had arranged for a couple of breakfast bags to be ready for us and while we waited on the morning staff to check, I raced around and took photos of the bar area in the cold light of day.

The place was no less stylish for the lack of loud music and elegant patrons drinking, just a lot easier to get around!

On the way to Chur on the train we checked out what we had in the breakfast bag. I was surprised there was so much – there was:

A great way to start the day!

In an instant. The 25hour chain continues to impress with hotels of style and substance. The Zurich Langstrasse combines a fantastic location with incredibly designed rooms and generous amenities.

While we can’t comment on the buffet breakfast, if it’s anything like the breakfast on offer at the other 25hours we’ve stayed at, it would be divine. As it was the breakfast bag got us well and truly through to lunch the next day.

25hour Hotels supported our trip by providing a complimentary stay. All opinions remain our own. 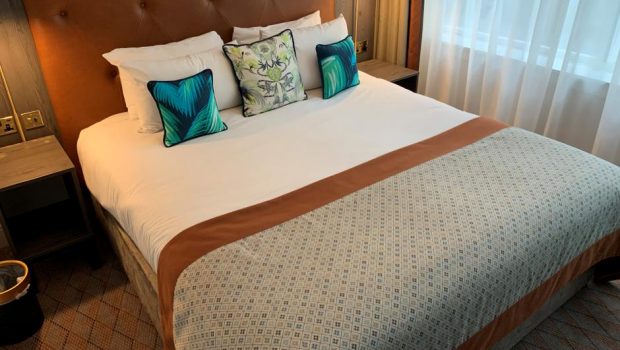 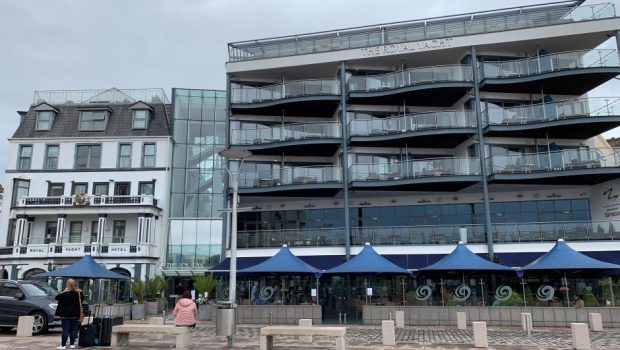