We try to check in early at the Park Regis Kris Kin and discover that due to a misspelling of my name that there is a slight delay in being able to gain access to the room. While we wait for the reservation to be sorted, we watch the bustle and flow of the other guests checking out and making their way to the ground floor restaurant for breakfast.

Given the handy location – equidistant between two Metro stations and handy to the Burjuman Shopping Centre, it’s no wonder that so many guests enjoy the 5 star Park Regis.

Eventually the reservation is found and we’re informed that the room is actually available immediately, so we head up without delay. Ange moves to take her suitcase but the staff are adamant about taking it up so we demur and allow them to provide us with the welcome service. 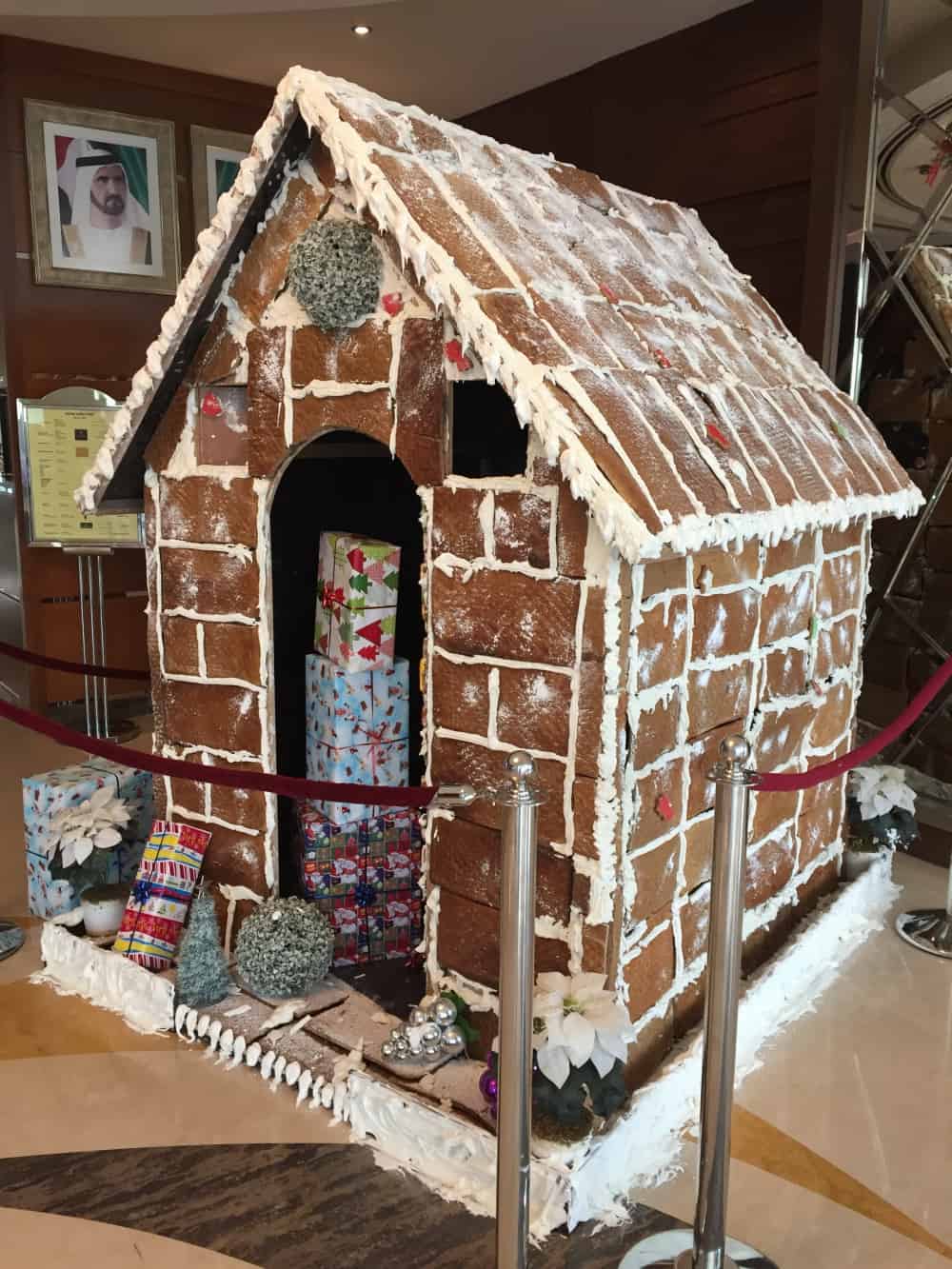 On the way to the lifts I notice that they had gone all out on the Christmas decorations – a very interesting choice in a Muslim country where a significant portion of the clientele seem to be from the Indian sub-continent. I guess a holiday season is a holiday season!

We head to our room on the 13th floor and are pleasantly surprised. It’s a substantive size and includes an executive desk along with comfortable chairs and a table. 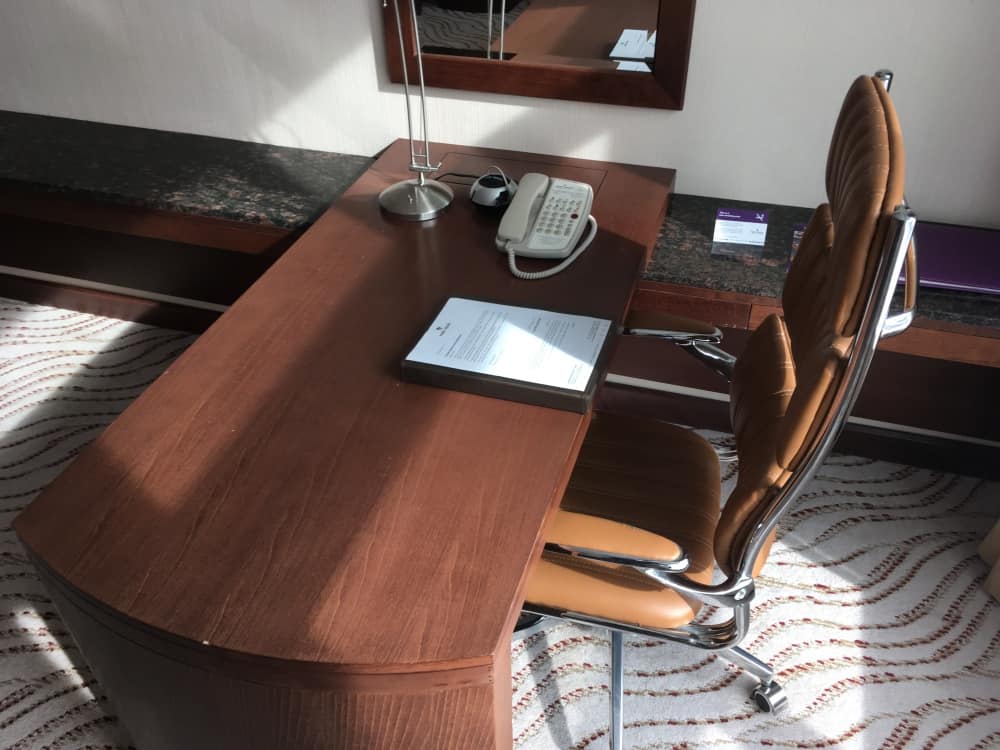 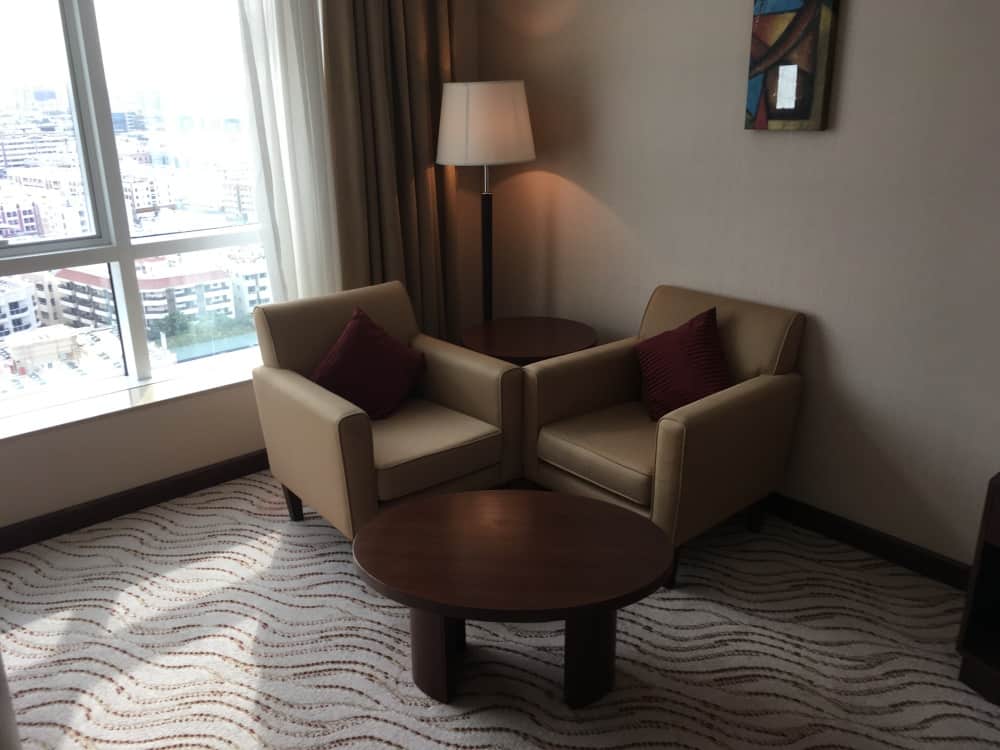 The windows provide views over the roofs of the neighbouring buildings and I’m fascinated by the patterns that the air conditioning units make – necessary in the summer when the temperatures reach 50°C (122°F)!

We’re impressed by the pillow menu allowing you to select the pillow combination that you prefer – you don’t get that sort of thing everywhere! The bed is big enough for three and is very comfortable. 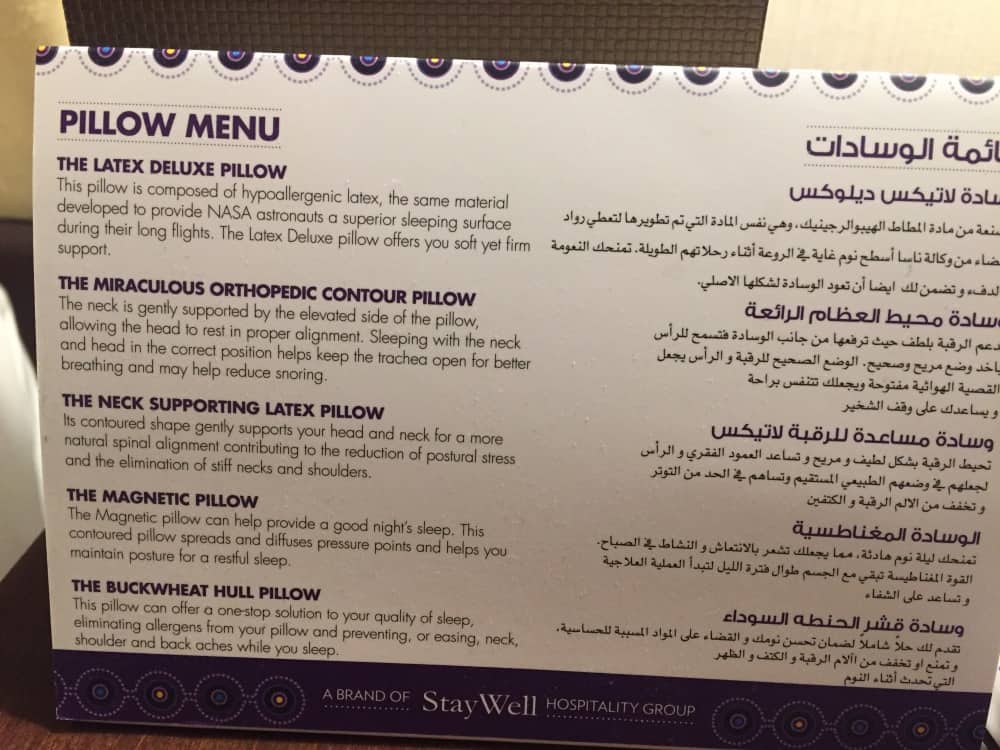 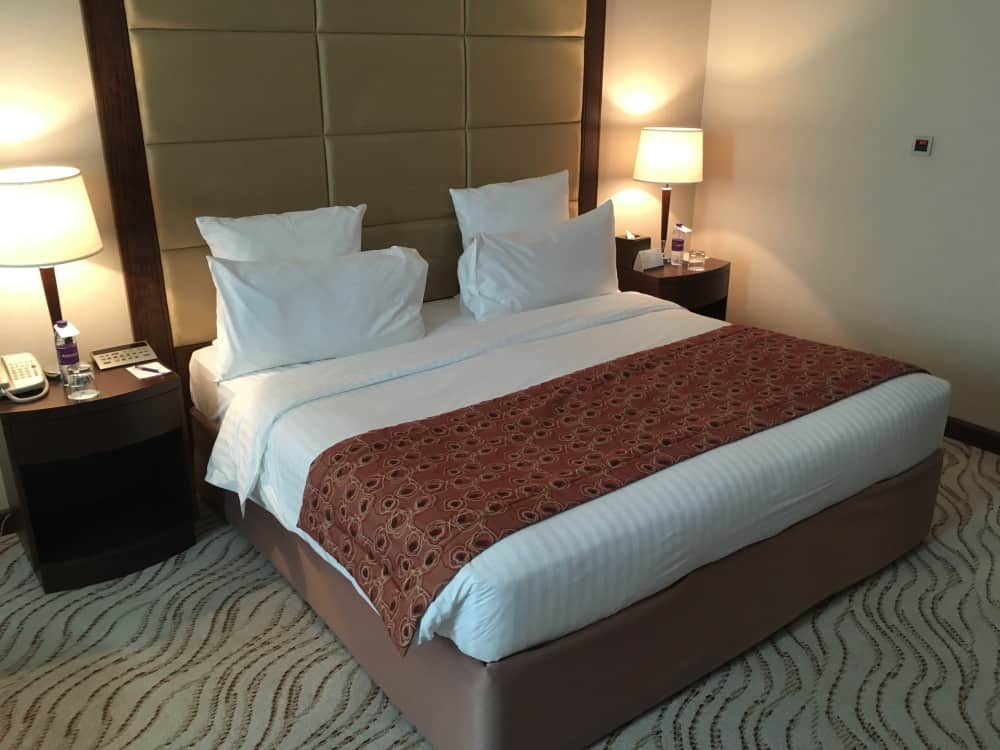 The bathroom has Eco-botanics toiletries and a shower over a bath. A lovely marble vanity unit holds the sink but there is a background sound of Christmas music that comes out of a speaker in the ceiling. I go over to the main control unit for the lights and stab at buttons but can’t see how to turn the noise off. Oh well, hopefully it’s off when we get back from our Hop on – Hop off bus trip. 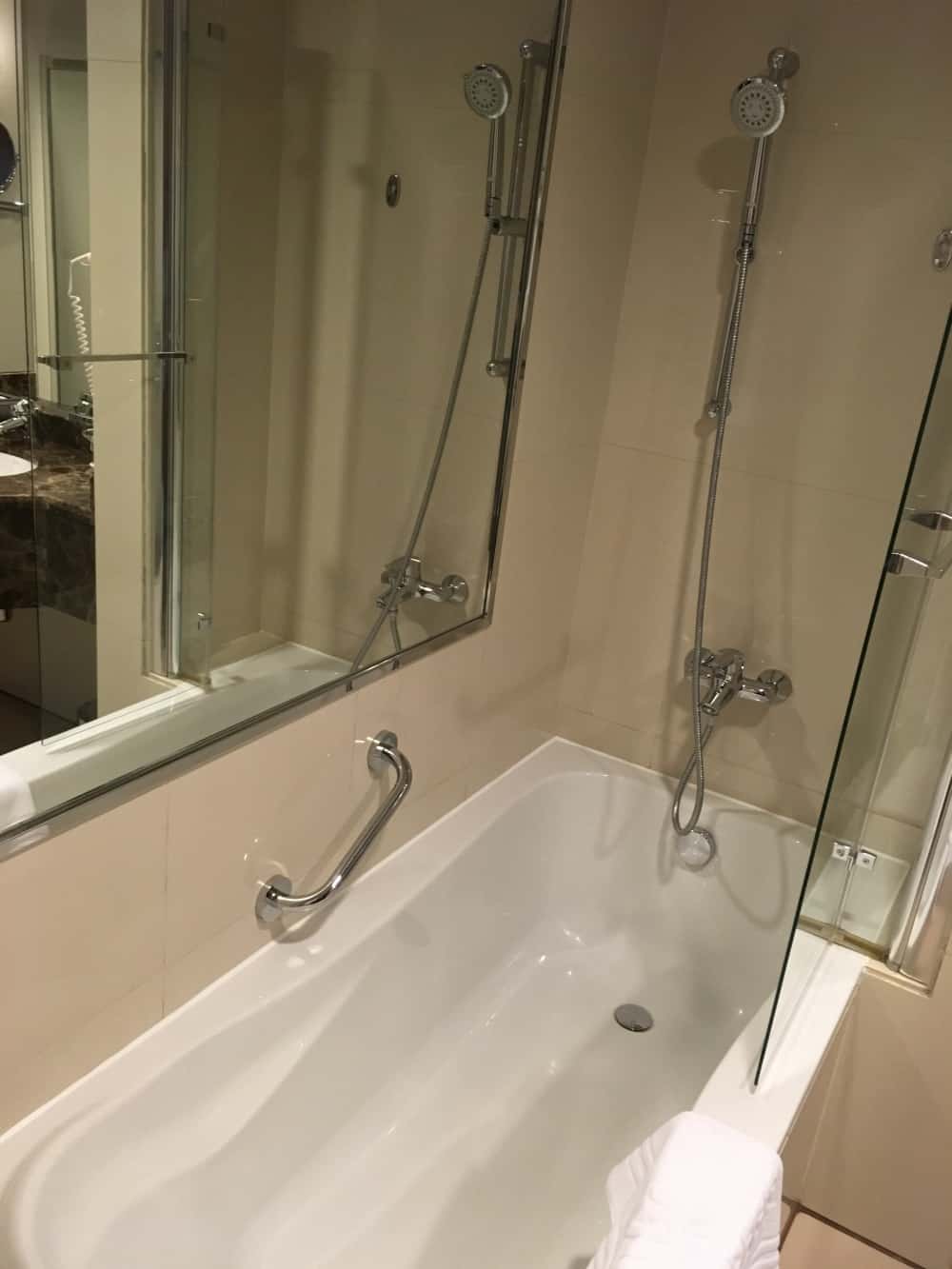 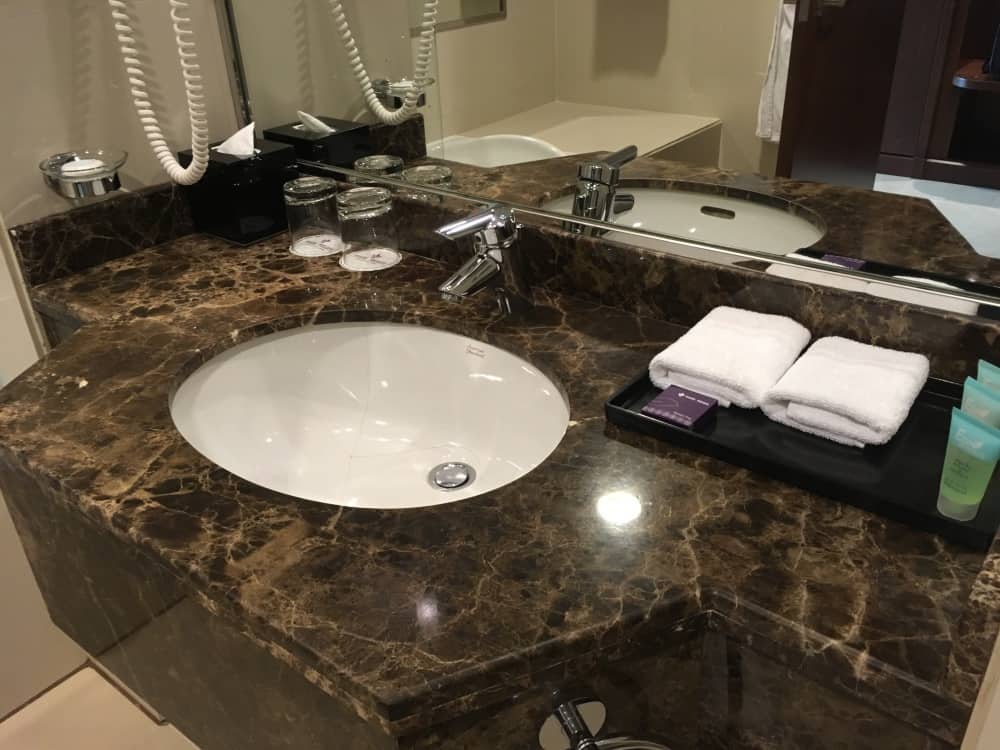 When we come back, we head up to the restaurant on the 19th floor. Half the floor is a restaurant and the other half is a wine bar, but the restaurant had been booked for a private function so we head to the wine bar. 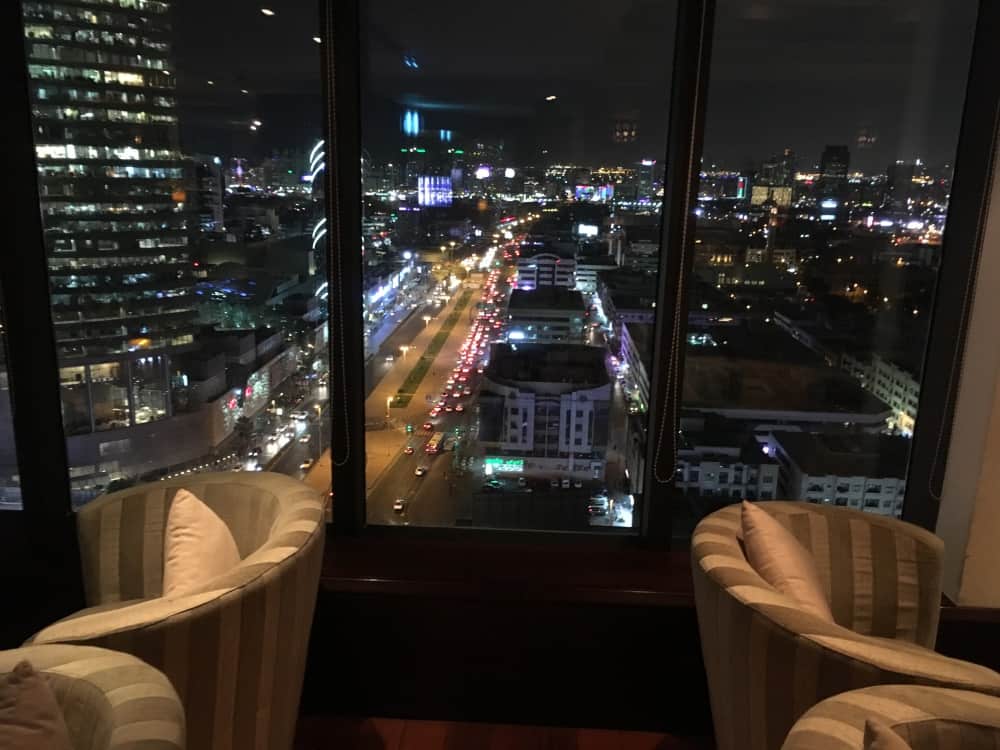 We selected a window side seat with views out towards the Burj Khalifa but moved when we figured the table wasn’t really conducive to eating. Although it was a wine lounge, they still had a reasonably good menu, so before long we’d selected some starters and had a look around the clientele.

A pair of well dressed European couples were starting their night early with slightly impossible to ignore conversations comparing Dubai with Sharjah (one of the other Emirates, just north of Dubai on the other side of Dubai Airport). Sitting at the bar in identical t-shirts were three muscular men enjoying large glasses of beer. I couldn’t figure out if they were sportsmen or in security. For mains I order Jumbo Tempura Prawns, Ange has the Tandoori Prawns, and for dessert we share a date and fig pudding with butter toffee cream and caramel icecream. 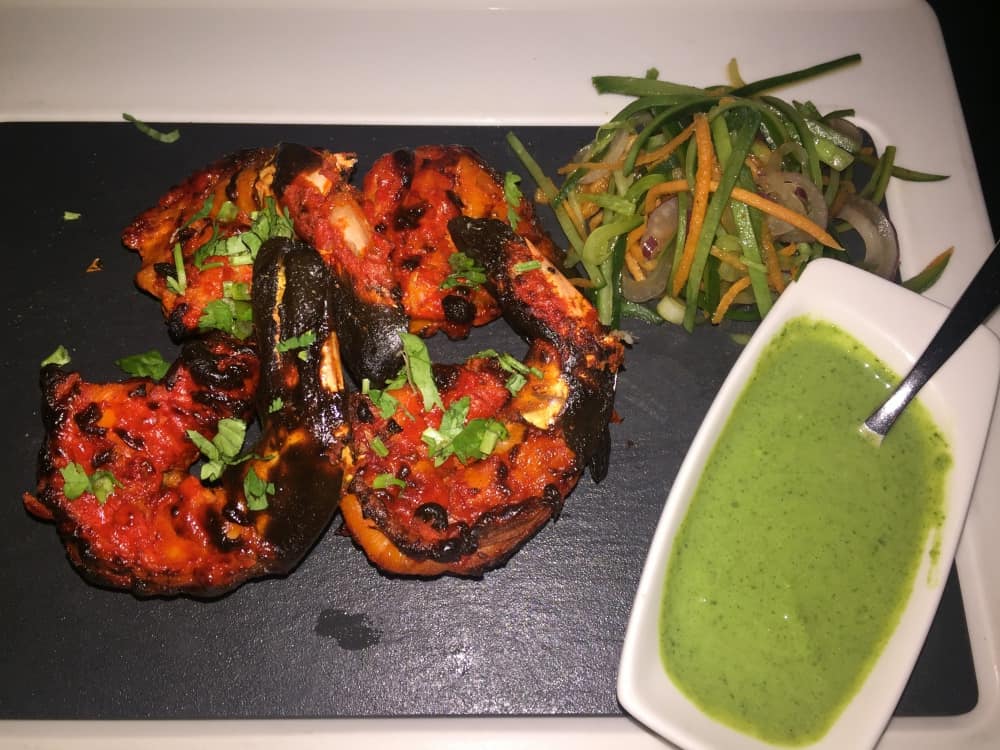 Just after we got our mains a lounge singer and pianist set up in the corner and started crooning. A besotted bespectacled older gent chatted briefly with the singer between songs, but it was a little early in the evening so there were few people in the bar. Thankfully if any of the other patrons were smoking, it didn’t make it over to our side of the bar.

I was struck with one thought: the bar and restaurant offered views out all four directions, but I couldn’t figure why the hotel (built in 2010) had rooms that only faced in two directions, neither of which included views out to the Burj Khalifa (completed in 2009). Ange went and checked out the spa facilities after dinner while I had a bath, and came back quietly impressed with the jacuzzi and sauna. The views from the rooftop pool were impressive too, she said. When we returned to our room the music was still playing so I rang Guest Services and they gently told me that the volume dial was in the bathroom near the hair drier. I went in and there it was – clearly marked and big enough not to be able to miss. Ahem! I walked through checking out the offerings and had just finished telling Ange that I was surprised that there were no hot dishes when I turned the corner and saw them aligned in a row. 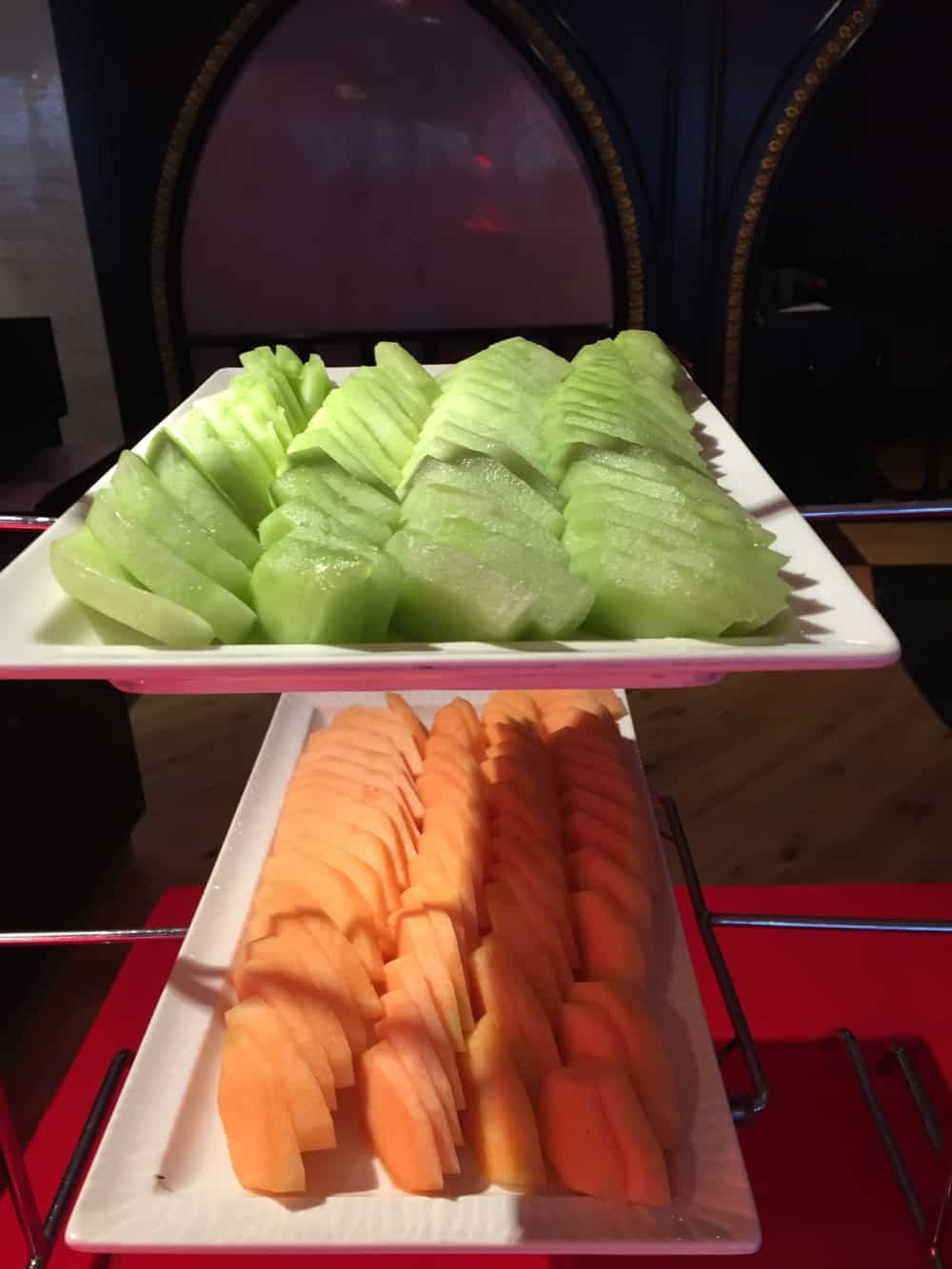 Apart from pork products there were all the hot breakfast dishes that you would imagine – including something called Monte Cristo which was like a cheese toasted sandwich (I found out later it was a variation of the French croque monsieur). As we ate I looked down at a vacant lot near the metro station. Dozens of men played cricket down there, obviously getting their exercise before the day became too hot for physical exertions. I wondered how serious the competition was? We made our way down to check-out and stored our luggage for the day with the bellboys. There was another slight delay while checking out and while the receptionist checked with the manager we finalised our plans for the day. On our return in the afternoon we collected our luggage and headed to the next hotel.

Absolutely. The hotel is in a good location and has some great facilities. While the number of rooms and volume of guests makes for a slightly crowded foyer, it also provides a fascinating melting pot of peoples from all four corners of the world.

The Park Regis Kris Kin supported our Dubai trip by providing a complimentary stay. All opinions remain our own.