What do you do with your lounge area during the day? Hotels have long been trying to figure out how to maximise use of their communal spaces during the day between check out and check in times. The citizenM brand have a novel approach – they’ve branched out into communal workspaces – sort of like a scaled down WeWork.

When we arrived at the citizenM in Glasgow, we were well too early for check in and made our normal enquiry as to whether our room was ready. Instead of checking their computer, the intensely friendly staff member informed us that it wasn’t but that we could make use of the work space through the doorway while we waited.

The reception area was funky enough with self check in computers, comfy couches with a table which looked like a giant fidget spinner bathed in a pink light through the red glass window. But the dominant feature was a huge bookshelf filled with quirky knickknacks, paintings and books which were for looking at but not reading.

But through the doorway the style continued, themed around “work” but unafraid to really push the boundaries. Bookshelves dotted around the walls held old typewriters and stacks of books chosen for their cover’s aesthetic. A tall stack of books with the covers ripped off all tied up in string drew the eye towards the back of the room and an assortment of globular lightshades diffused the lamplights.

A couple of communal working tables sat alongside some booths reminiscent of American diners and a meeting space through a velvet curtain ensured that small group lectures or presentations were well catered for.

In the front of the room near the glass windows, some single red chairs at desks allowed for more solo workers while comfortable leather armchairs surrounding a low coffee table allowed small group discussions. As we settled in towards the back of the room we noticed a steady stream of people filing into the meeting room – a presentation on how to mine LinkedIn for sales leads apparently.

All that work certainly got us hungry so Ange headed upstairs to find something to eat. The dining area on the 1st floor continued the funky decor and cool vibe with blown up lampshades and interesting displays in the bookshelves around the walls. The kitchen rustled up some paninis for us and they came with a little potato salad on the side.

And then before we knew it, it was time to check in. We headed back out to the reception area and approached the desks with the self check in computers. A few screens later we’d confirmed that we’d selected the correct booking, chosen what kind of room we wanted (High floor, city view thansk!), declined breakfast and a late checkout (mainly because of the price!) and then created our two key cards. The computer spat out a piece of paper with our room number on it and we were done.

We’d been staying at some small hotel rooms (Haymarket Hub) and our cabin on the MSC Cruise hadn’t been huge, but neither had taken the small space and really shaken up the design concept of what a room could be.

First of all everything in the citizenM room was controlled by an iPad which sat on a docking station beside the bed. Second of all everything was controllable. And by that I mean the curtains, the blinds, the TV, the lights in the main room, the coloured lights in the bathroom and the alarm clock. All from the app on the iPad. In addition, switches allowed you to “manually” operate each of the systems.

The bed stretched across the whole width of the room which made getting in and out an interesting affair, but it was one of those dreamy cloud experiences sleeping on it – very comfortable!

The bathroom took up about a quarter of the space, containing just the toilet and shower and it had lighting which you could control from the iPad with a full color wheel allowing any colour you desired plus some presets including Romantic and Working.

While a Romantically lit shower kind of made sense, I assumed the Working presets pertained mainly to the rest of the room rather than specifically for the shower. The shower had a rainforest shower head and citizenM’s own toiletries, including invigorating “AM” and relaxing “PM” shower gels.

Because the room was so small the sink was actually outside the shower, but clever use of shelving allowed it to hold the hair dryer, tissues and towels.

Under the bed was a pair of sliding drawers, the right hand one containing the safe, while the left one was empty, providing enough space to unpack a suitcase. After playing with the iPad and all the settings (especially the lighting) way too much, we headed out to see what mischief we could get into in Glasgow. On the way out we investigated the communal areas a little more.

On the first floor, around the corner from the cafeteria were some chill out areas, decorated in the over the top fashion we’d become used to. Floor to ceiling windows bathed the area in light and comfortable chairs arranged in sections separated by bookshelves allowed a semblance of privacy. At the far end was a computer centre allowing the use of some Macs and an office printer allowing users to print out anything that they needed. My favourite section would have to be the one with the horse though.

A spiral staircase connected the cafeteria/lounge area on the first floor with the entrance area and this was a case study in simple geometric shapes. The gentle curve of the red and dark grey staircase gracefully contrasting with the white of the wall behind it, while the white circular light-shades furthered the feeling of a surrealist painting, hanging in mid air.

The only right angles were seen from the stair case as the front entrance’s roof was a perfect square. With a mannequin lying on top, staring at the sky. Wonderfully whimsical!

Around the corner from the staircase was a door leading to a further meeting room, outside of which were two perspex chairs, suspended by chains from the ceiling. The seats and the meeting room were a little bit like fishbowls, exposed to the street level pedestrians by uncurtained windows.

Throughout the hotel quirky pictures on the wall and in the lifts had made us smile, one looking like the pop star Lorde – picking out personas of travellers I guessed with the Shopper, the Tourist and the Businessman being easiest to pickvout.

Definitely! CitizenM Glasgow is centrally located and quirky as hell. It’s made it possible to want to be in the room, despite its small size, by focusing on the way you interact with the room facilities. Clever design features allow them to provide everything you’d normally expect from a larger room in a very efficient package. 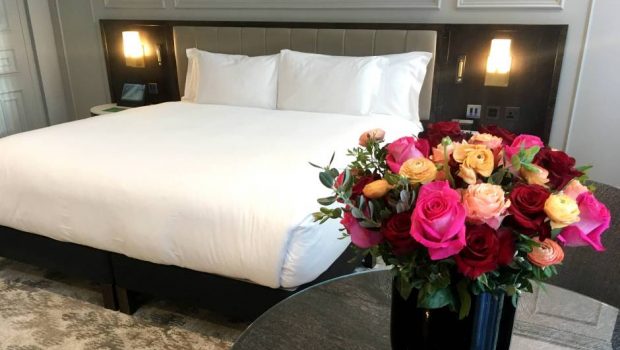 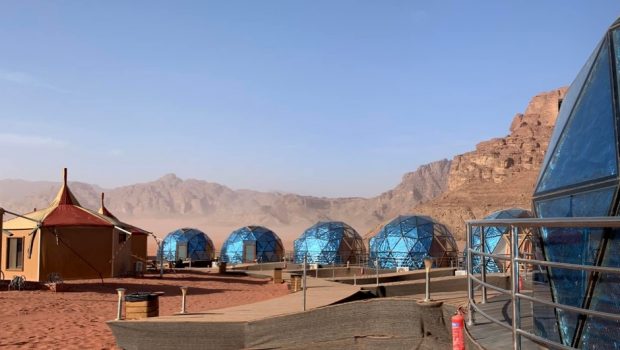