The Kimpton Sir Francis Drake is readily identified by the 15th century outfit that the doormen wear. In an attempt to show a point of difference to the more staid hotels nearby, the doormen wear the period costume of  gloves, hose, ruffle, and hat. It’s funny to me that the nearest Sir Francis Drake ever came to San Francisco was sailing the Golden Hind into Drake’s Bay 28 miles north. Still, what’s in a name? 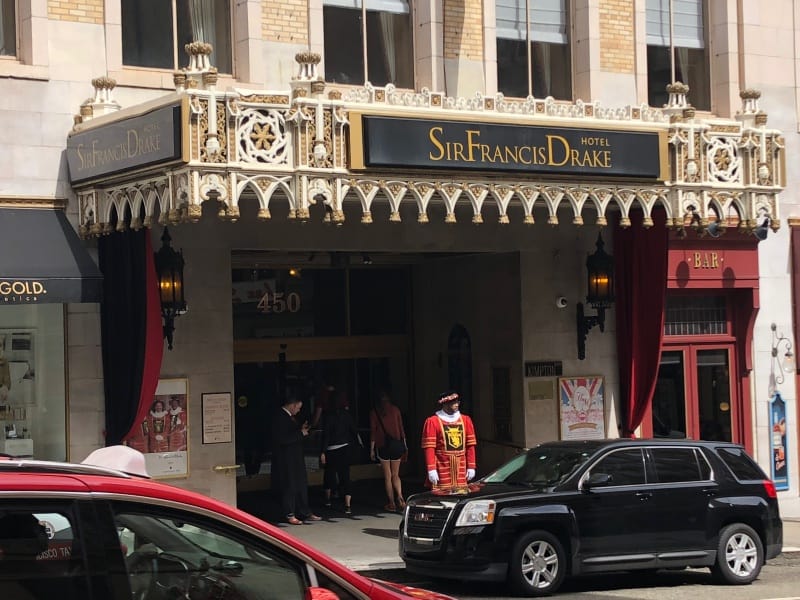 You can’t beat the Sir Francis Drake for location. It’s one of the many hotels near Union Square in San Francisco, a very popular place to stay the receptionist assures us, for its upmarket boutiques: Macy’s, Bloomingdale’s and Victoria’s Secret, which all lure shoppers in from the street. As the hotel is also on Powell Street, the Powell-Hyde Street cable car line runs right past, so getting down to Fisherman’s Wharf is dead easy.

Union Square is chock full of restaurants and cafes, plus it’s also a focal point for tourist operators. On the Powell-Geary corner of Union Square representatives of three different hop-on hop-off bus companies compete for tourist’s attention as they walk past.

We check in smoothly and head up to the room. We’re on the 14th floor so have roof views of the buildings on the opposite side. It’s a big room: a couch and coffee table greet us upon entry, and as we turn the corner we see the huge desk: easy to get work done! 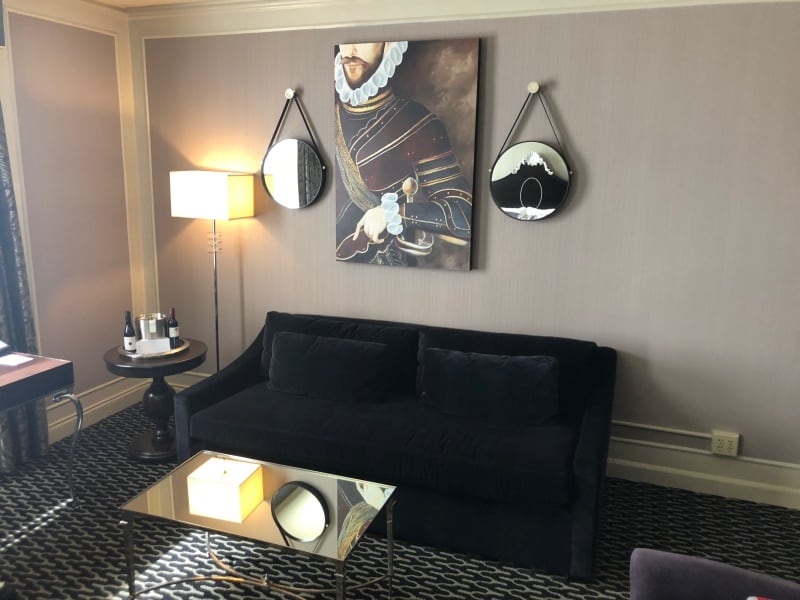 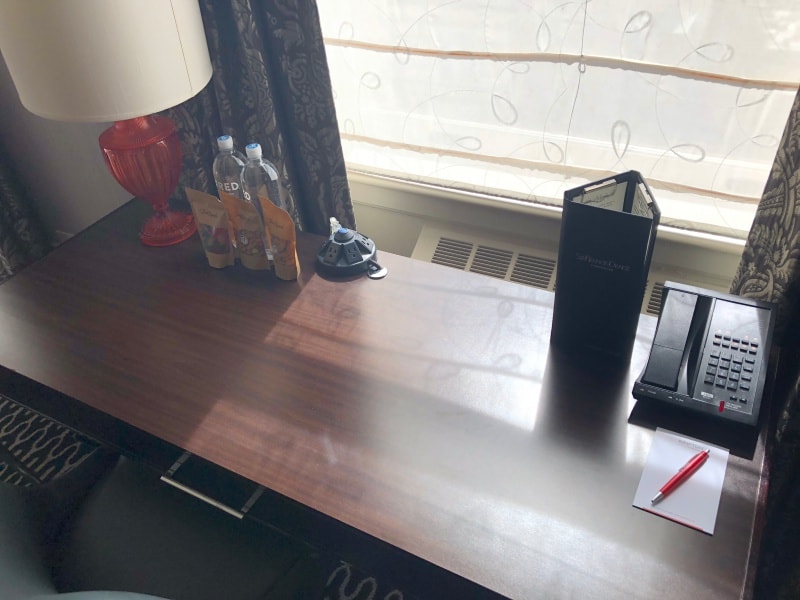 The big screen TV sits on a bright red chest of drawers but swivels so can be viewed from either the bed or the couch. 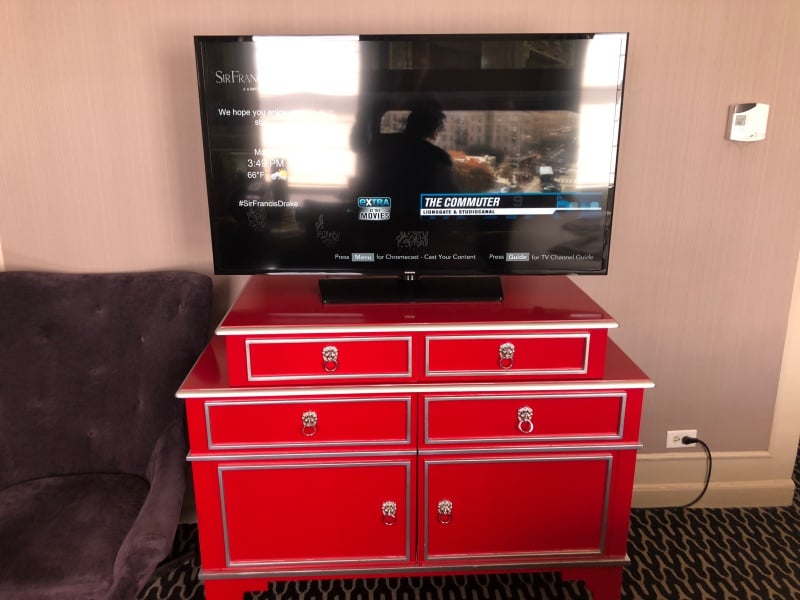 Tucked around the corner is the closet and a full length mirror – the closet has a light in it which you should definitely turn off before you go to sleep – it took an embarrassing amount of time to figure out where the light was coming from! But the bed is the focal point of the room and it delivers in spades. It’s a little higher than normal, but that’s only fitting because it’s like sleeping on a cloud! It’s a King-sized bed and when we arrive it had been tastefully arranged with one of the robes laid out on it. 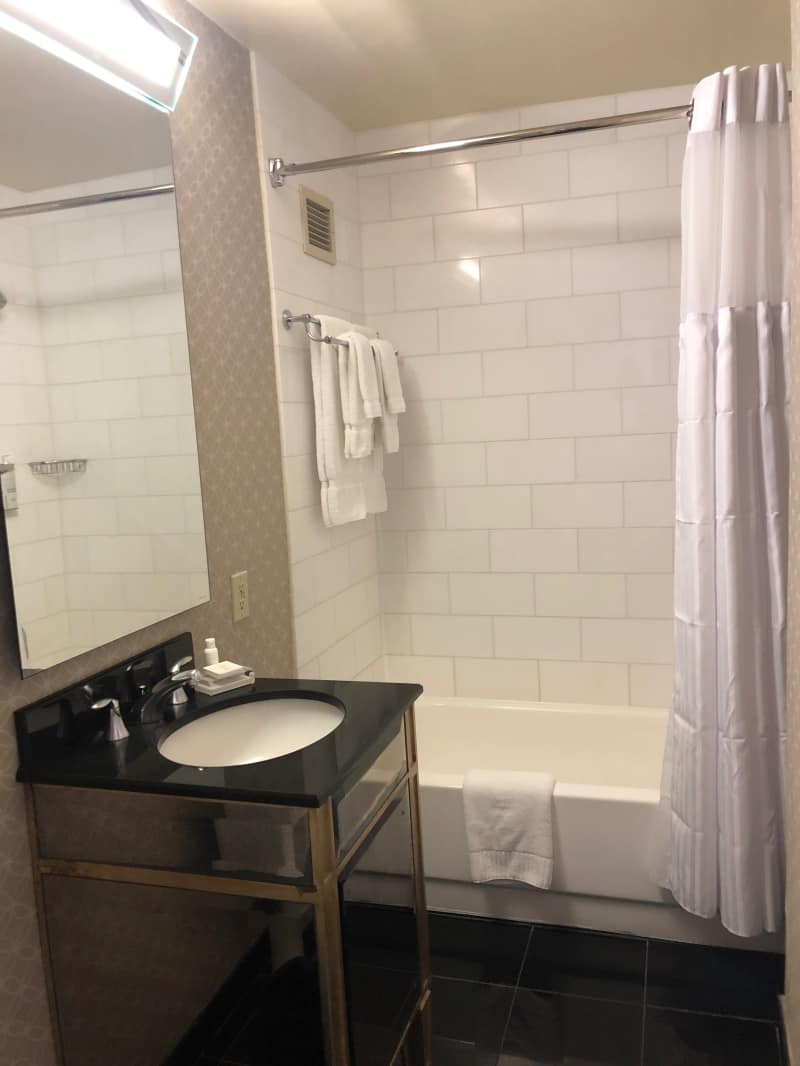 In the bathroom, you get both a shower and a full sized bath, and the fruity toiletries are Atelier Bloem. 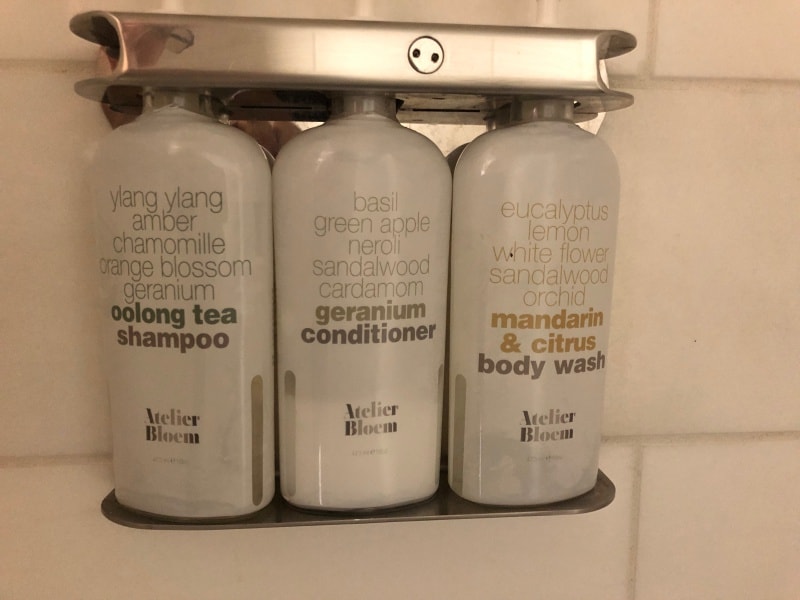 We did enough walking in San Francisco to avoid going to the gym, but if you’re still getting used to the size of the meals in the U.S., the Sir Francis Drake has an onsite gym available. We also found in our room a yoga mat for use while we were there. 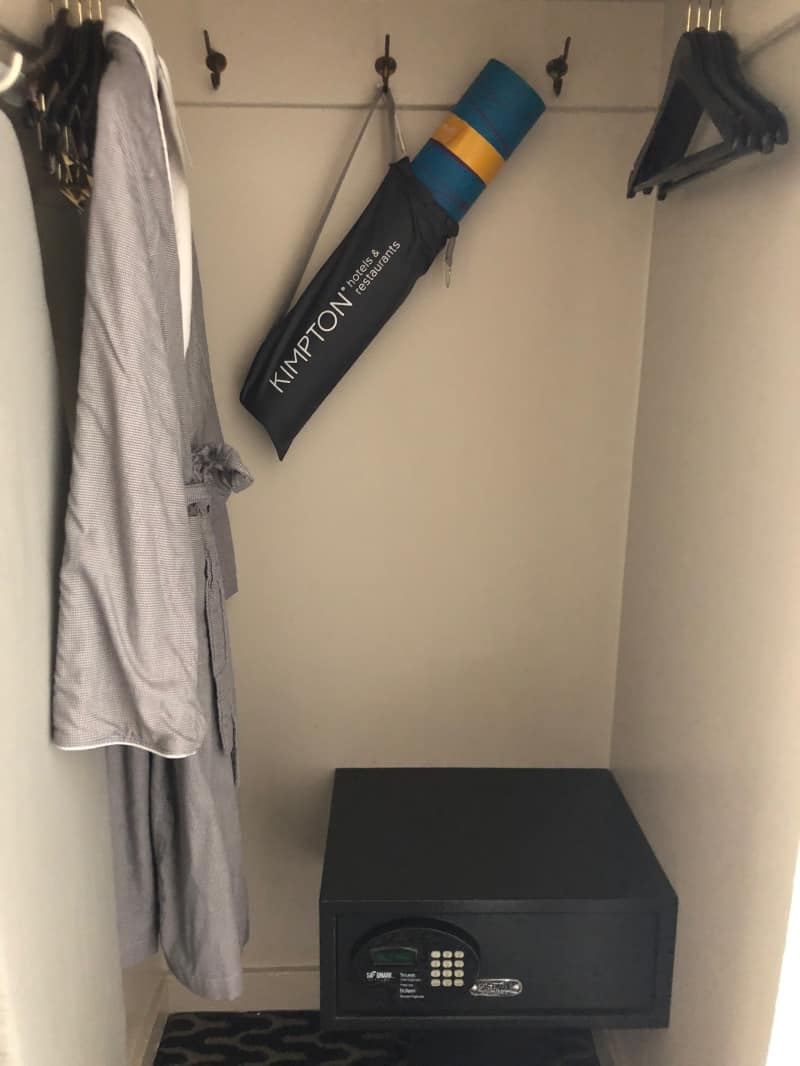 When we checked-in there was a bicycle in the lobby indicating that you can get free bike rental while you’re a guest, though it might pay to carefully plan your route to avoid the hills! 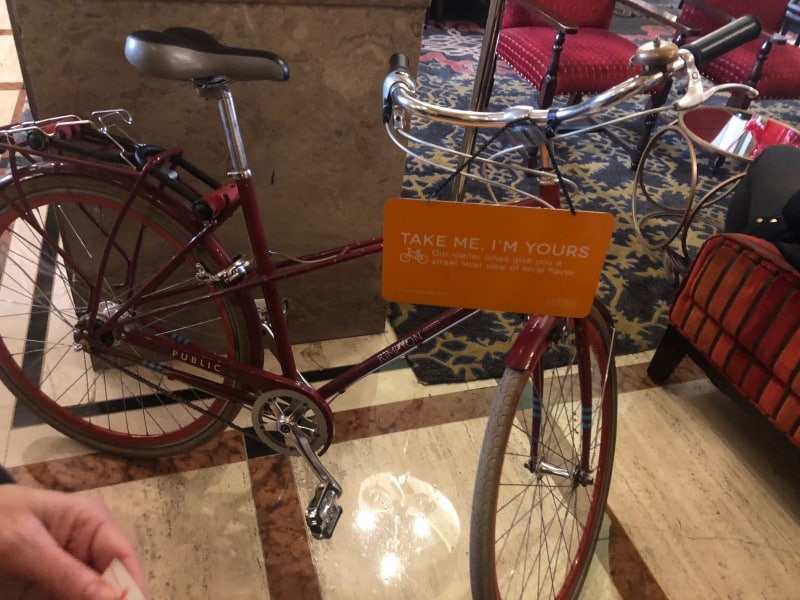 They’re also a pet-friendly hotel, meaning not only can you bring Fido or Felix, but the hotel won’t charge you for the pleasure.

The lobby is impressive – I thought that the hotel had once been a theatre, such is the grandeur of the decor, but apparently that’s just how they built hotels back in 1928. On the 21st floor is the Starlight Room, a nightclub which normally hosts a drag act with two shows daily.

When we get there it’s during the day and it’s being remodelled, so the lifts no longer stop there. We’re keen on seeing what the views are like up there and so we… find an alternate route to gain access and have a look around. 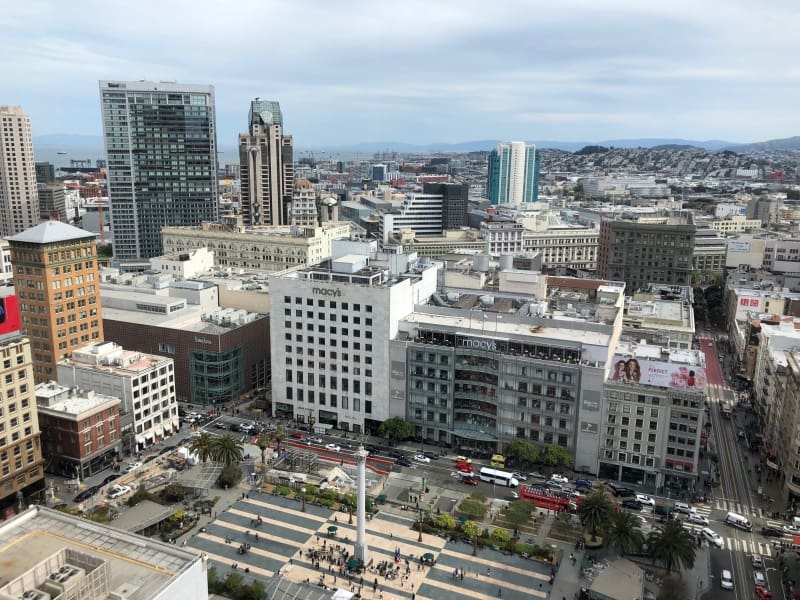 While the views out the windows are very cool, there’s something about a nightclub when viewed during the cold light of day which is disappointing. I think it’s because you don’t have the buzz of music and alcohol and people having a good time and a darkened room to distract you from the dubious decor and sticky carpets. Anyway, we avoid the curious looks of the workmen and return to our room via the fire escape, noticing that one of the workmen goes over to the lift to find out if that’s the way we gained access to the floor. Would definitely go to check out the show once they’ve remodelled!

Unfortunately there’s now a practice among San Francisco hotels to charge a nightly amenity fee. In the Sir Francis Drake’s case, this is a $25 fee (which quickly becomes almost $30 after the city and state add their tax) which offers you $10 off the hotel restaurant, a $15 upgrade to the WIFI, unlimited local phone calls and 10-20% off the hotel stores. 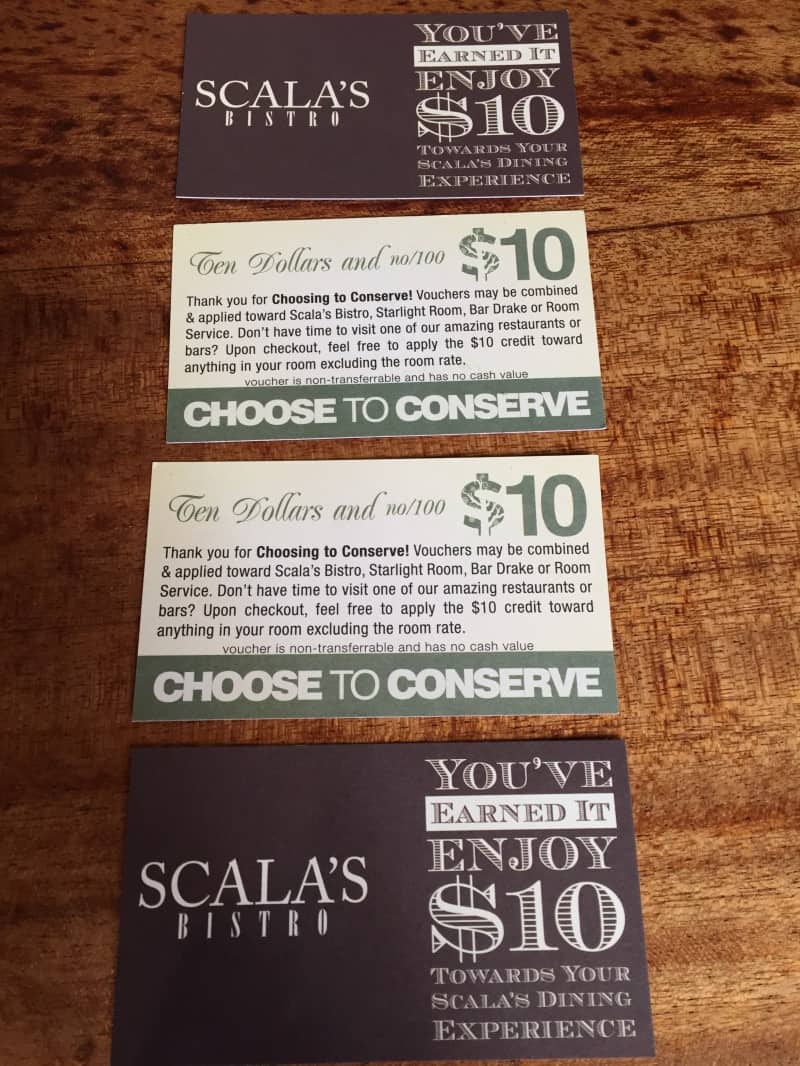 Of course to get the $10 value you have to dine in their restaurant and no, you’re not supposed to be able to stack them.

If you’re not interested in the hotel stores and don’t make any local calls, and believe that fast WiFi should be standard, then paying $30 for a $10 voucher which can only be redeemed at the hotel restaurant doesn’t feel like a good deal. I guess they can’t roll the fee into the standard room rate because they wouldn’t be competitive with the other San Francisco accommodation in Union Square.

However, they do offer another $10 off voucher if you turn down housekeeping, and that voucher can be stacked. You can even get that applied to any non-room charge spending. So if you get room service, mini-bar or in-room massages, you can get the voucher(s) values off that. Just not the actual room rate. 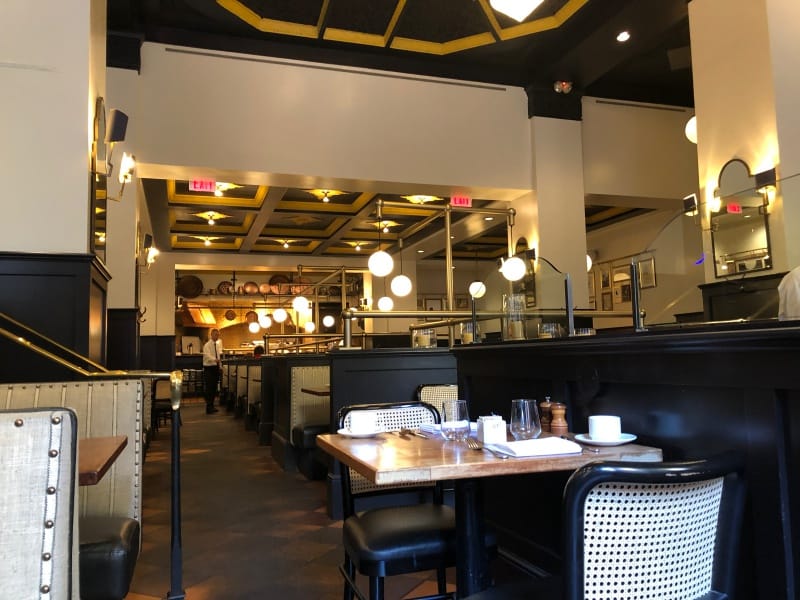 So, a fistful of vouchers in hand, we headed down one morning to see what we could get for breakfast at Scala’s Bistro, the onsite restaurant at the Sir Francis Drake.

We’d had no luck getting a table the previous night, but in the morning the place was almost empty. Handy because we were on a schedule. Our waiter seated us promptly and we figured out what we wanted. I went for the big breakfast with an orange juice and Ange opted for a stack of pancakes. Very unlike Ange, who normally goes for the healthy option!

Anyway, the food arrived quickly and was delicious. The only slight delay was when we came to pay and the waiter needed the manager to come over and authorise the vouchers. We were lucky enough that they decided to overlook the restriction on one “amenity fee” voucher per meal and so our $45 breakfast only ended up costing $5.

My issue with the amenity fee and sales taxes aside, it’s really hard to fault the Sir Francis Drake. The hotel’s proximity to Union Square makes it perfectly located, but the bed is what really makes the stay special. The ample size of the room really lets you unwind and decompress. I’d definitely go back for those reasons.

Kimpton Sir Francis Drake Hotel supported our trip to San Francisco by providing a 1 night complimentary and 2 night discounted stay. All opinions remain our own.