Check out our journey to the sky in a Rainbow Ryder’s balloon – the Albuquerque International Balloon Festival was our main reason for being in Albuquerque and we had a blast.

We knew that weather could be fickle, so we’d planned a backup day in our itinerary just in case our balloon flight had to be cancelled for whatever reason.

We found out later that because all the balloon flights were totally booked out, it wouldn’t have mattered if we’d had the extra day as there was just no capacity to rebook. Either way, we had an extra day to fill, so Ange got us onto a trolley bus tour of Albuquerque.

So no surprises when the tour began with a visit to the locations used for Jesse Pinkman’s house, and just around the corner, Chuck McGill’s house. I must admit it was cool to see the locations especially as someone was filming something at Jesse’s house!

A huge vacant factory struck me as a run down eye-sore, but as we discovered it was actually owned by the City and rented out as a movie and TV location (very lucratively apparently!).

The tour guide had a very well rehearsed patter – it was funny hearing the difference between her normal voice used for one on one conversations and the energy enthused tour commentary voice.

My favorite story, pieced together from various sources is that William Shatner happened to be filming nearby, and a local was working on the set. They asked if he’d seen the UFO house. Shatner admits an interest so they head out to check it out at night. The UFO house is owned by the architect, Bart Prince (a protege of Frank Lloyd Wright).

So they ding dong the bell – it’s the middle of the night remember, and Prince comes to the door and bleary eyed asked who they are and what they want. Shatner introduces himself and says he wants a tour. Prince says “Fuck off, you’re too fat to be William Shatner”, and gets him to say “Beam me up, Scotty” to prove his identity. Apparently he got the tour.

The tour dropped us off at the Hotel Albuquerque so we decided to grab a bite to eat at Garduno’s. Unfortunately I ate altogether too many of the complimentary corn ships and salsa before my main arrived and as a result couldn’t finish it. Ange’s nachos were fully loaded but she had better luck finishing it. She washed it down with a giant margarita which tasted as good as it looked.

The tour company had a kiosk in the foyer of the hotel, so we headed back and got the lady manning the desk to ring our hotel for the shuttle to come and pick us up. They said they would be twenty minutes. Forty minutes later we still hadn’t seen anyone so we went back in and got her to ring them again.

Apparently a mistake had been made (she could hear the driver yelling “but I just came from downtown” in the background) and that this time they’d be 20 minutes. Sitting in the sun on a very full tummy reminded me that the locals tended to have a siesta and that was very tempting, but I didn’t have a sombrero and we didn’t want to miss the shuttle so kept our eyes open.

Included in the cost of the tour was a pamphlet with assorted freebies and discounts that we qualified for by virtue of having been on the tour. One of those was a free milkshake at the 66 Diner on, you guessed it, Route 66. We’d swung past while we’d been on the tour and it was only a fifteen minute walk from the hotel, so we headed out at dusk.

It was a classic American diner and the setting on Route 66 was perfectly fitting – a great tribute to the 50’s with all the decor and kitschy memorabilia, leading to this conversation “I had Marilyn Monroe in the men’s toilets, who did you have? Elvis”.

On the way back we stayed on the main roads in an attempt to have more street light (we’d gone through the suburbs on the way there) and found ourselves walking past the Crossroads Motel (featured in Breaking Bad) and various less salubrious characters.

While the ballooning had certainly been the focal point for coming to Albuquerque, paying homage to Vince Gilligan’s creations (Breaking Bad, Better Call Saul and now El Camino) was also high on my list. And what better way to pay homage than a tour of filming locations actually travelling in a Winnebago and maybe even meeting a (supporting) cast member? Sound good? Hell yeah!

Unfortunately there were too many people on the tour for everybody to actually travel in the Winnebago all the time, so a support bus followed it around the locations, and we were assured that everyone would get a chance to travel in the RV. Suitably mollified, we settled into the (new, comfortable) bus.

The people on the tour were a mixture of ages and genders, and one guy was spending his birthday on the tour and had bought a suitable hat for the occasion.

Our tour guide was a professional, typically running the ABQ Film tour, and had a good rhythm, interspersing the long legs between locations with funny stories and a quiz. We’d just visited the location of Tuco’s HQ which Walt blows up (a TV screen showed pertinent scenes just before we arrived to refresh your memory of the context of the location) and I’d just turned to Ange to show off that I knew that the substance used for the explosion was fulminated mercury when that popped up as the question. Boom! Have a prize – some crystal meth and a fake ID.

Looks like just a random street corner, right? Nope, this is where Combo was shot and Jesse was about to take revenge when Walt saved him by running over those responsible.

Both the RV and the bus we were on then converged on the food stop on the tour – Los Hermanos. From the outside you could see it had been re-branded as Twisters but inside there was Los Hermanos branding and one corner taken up with a shrine to the show.

I couldn’t help but feel for the two businessmen just having a breakfast burrito. Minding their own business and then the restaurant is invaded by Breaking Bad fans. And of course in context of the restaurant in the shows, anyone in a suit is going to look guilty. They left very soon after we all arrived, much to the amusement of a few of our fellow tourists.

We each got a drink and a breakfast burrito (included in the price of the tour), and had time to visit the toilets before heading off. We missed the rush out the door and so we were too late to get on the RV, the 13 seats being taken up with the first 13 of the 20 from the bus. Never mind – at the next stop!

Jesse’s apartment where his landlord was Jane…

The service station where Walt blows up the obnoxious guy’s 1996 BMW 318i Cabrio.

Finally we pulled into the car wash which Walt buys to launder his ill-gotten gains. We all bundled out and while we’d been sitting beside the actor who plays Brock (Andrea’s son), the actor who pays Combo was there to meet us.

The stop there was used as another toilet stop, and when it was time to re-board I ensured that we got seats on the RV. I was a bit grumpy at the thought of not getting on-board the RV and though the seats were much more comfortable on the new bus that was following, and the seat-belts didn’t work on the RV, it would have left me feeling cheated if we’d not had some time on the RV.

Inside the RV was decked out in an approximation of a mobile lab with various references to the show plastered on the walls. I guess making a faithful replica would have been too bland – better to go over the top with LWYERUP license plates and packets of funions and stacks of cash lying around instead.

And on we went to perhaps the most famous of locations – Walter White’s house. The owner had put up a large fence around it because people were always throwing pizza’s on her garage roof, and a sign on the fence exhalts visitors to “Take your picture from across the street. Do Not Disturb Us”.

While the driver and guide in the ABQ Film bus we had started in was professional, the driver and his wife in the RV were… from different backgrounds. They had been extras in Breaking Bad and obviously had started the tours as a passion project.

It was funny comparing the patter from the ABQ film driver (succinct story, timed to finish as we arrived at the relevant venue) with the RV driver (rambling, prompted by the wife to include things he’d forgotten), but you could not fault the guy for his love for the shows.

The final stop was the laundromat under which the lab was built. If there is anything more uninspiring than an industrial laundry, I don’t know what it is. I’m glad we went, though, so that we could tick that off. The driver tried to make it interesting by getting us to pretend to walk down stairs. This was because while the laundry machines did have hinges like in the show, they didn’t have stairs going down underneath them so the actors had had to act like they did.

Anyway, a great day out in the ABQ. We got dropped off where the tour had started, in the Old Town. We found a bar and asked for them to call our hotel and get the shuttle to pick us up. We grabbed a drink and a plate of calamari while we waited.

The shuttle came and picked us up, we collected our luggage and an hour later got the shuttle to take us to the train station where we got the Amtrak to Flagstaff, our overnight stop enroute to the Grand Canyon. 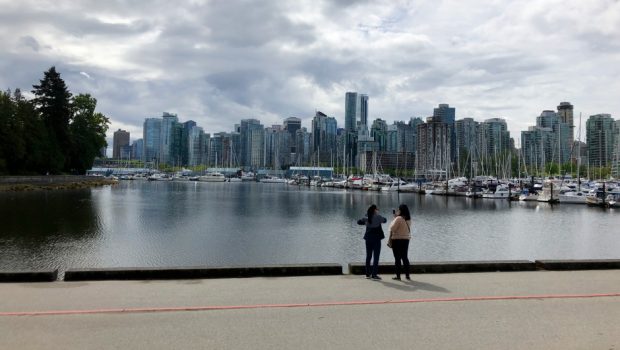 Fun Things To Do in Vancouver on a 2 Day Stopover 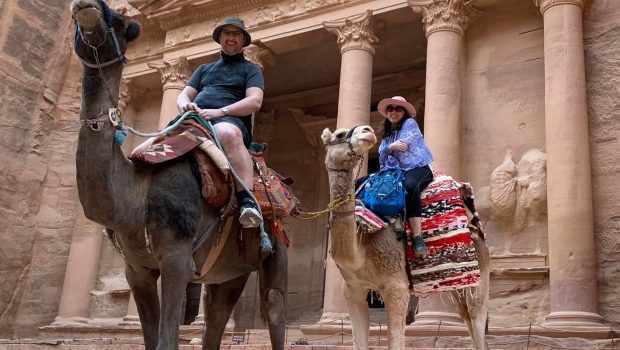