So after a rocky start (not being picked up for our trip), I wanted to give the tour a chance. My travelling companion was a keen climber so the opportunity to climb on a glacier was her number one thing she wanted to do.

We managed to get picked up this time and headed out towards the glacier. The guides were personable enough and began telling us stories on the way. The stories were interrupted early on in the trip when one of the guides had to answer their cell phone. Apparently they had left someone else at a hotel! Some sort of arrangement was made to get the climber to the meeting point and we continued on our way. I just hoped that the climbing safety was better than the pick up logistics!

We took a comfort stop around dawn and people grabbed some lunch for later. 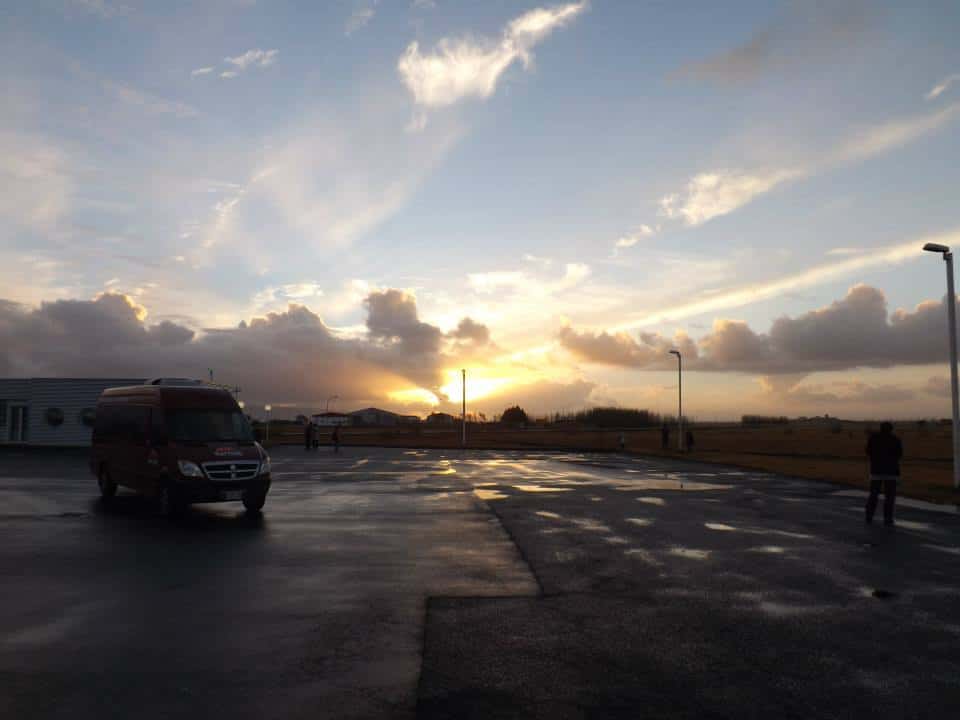 As we continued on our way one of the guides told the story of the farm pictured below. He said that one day the farmer rang the Geological Centre and asked if there was any reported activity recently. The person in charge checked their records and said that no, there hadn’t been anything sizeable recently. “Thanks,” said the farmer and hung up.

Ten minutes he rang back and said “Are you sure there’s nothing going on?”

The person double checked and said no – why? The farmer responded – “I’m pretty sure there’s an eruption going on.”

“Well thank you sir, I think that if there was an eruption, then we would know. Our equipment is very accurate and we have stations all across the island. What makes you so sure that there’s an eruption?” 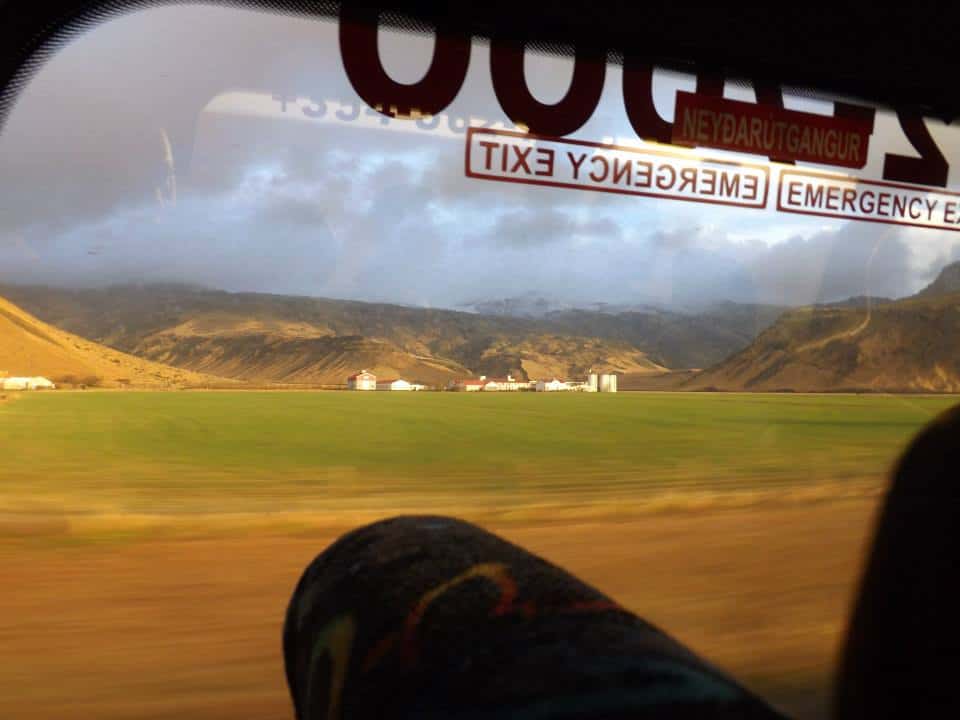 One of the things Iceland is known for is waterfalls, apparently Skógafoss (not pictured here) is near the glacier which we will be climbing on, so we’ll stop off on the way back to check it out. 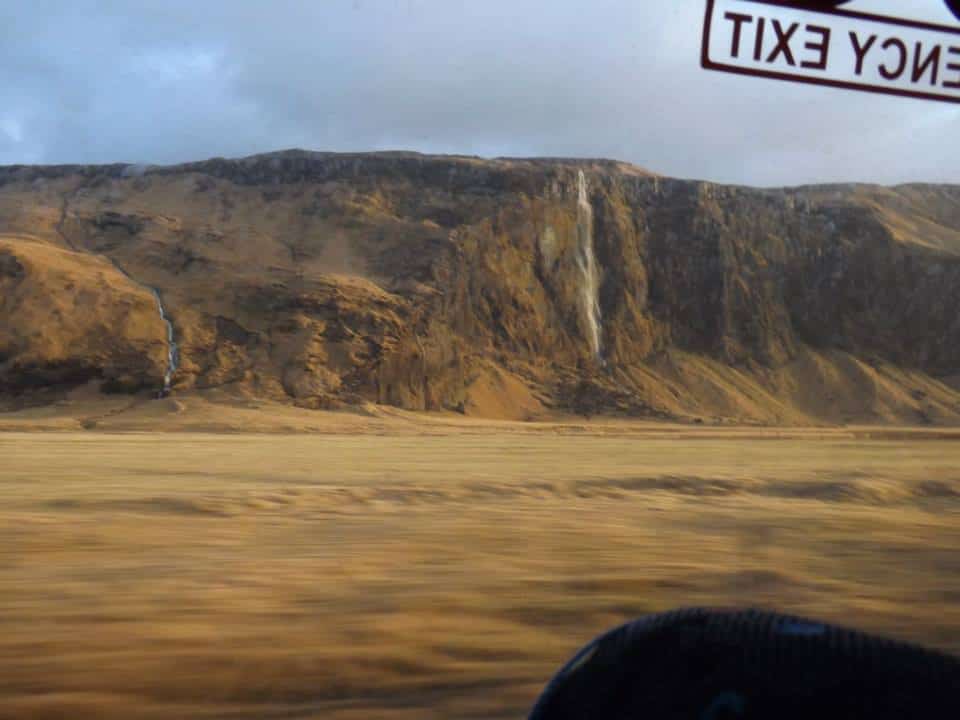 So we arrive at the carpark and get fitted for crampons. Now it should be said that the instructions for the trip mention:

Included: Glacier hiking tour on Sólheimajökull glacier with a certified glacier guide, an optional introduction to ice climbing and all specialised glacier gear; climbing harness, glacier crampons, helmet and other climbing safety equipment. Lunch is NOT included. We recommend you bringing a packed lunch for the day.
Remember to bring: Warm outdoor clothing, waterproof jacket & pants, headwear and gloves. Good hiking shoes are recommended.Sturdy hiking shoes, waterproof jacket and pants can be rented when you make your booking or on location.

A young Canadian-Chinese couple are wearing sneakers, while everyone else is wearing “sturdy” hiking boots. The guide doesn’t raise an eyebrow so I don’t think anything more of it – if their footwear would cause an issue, surely he would mention something? 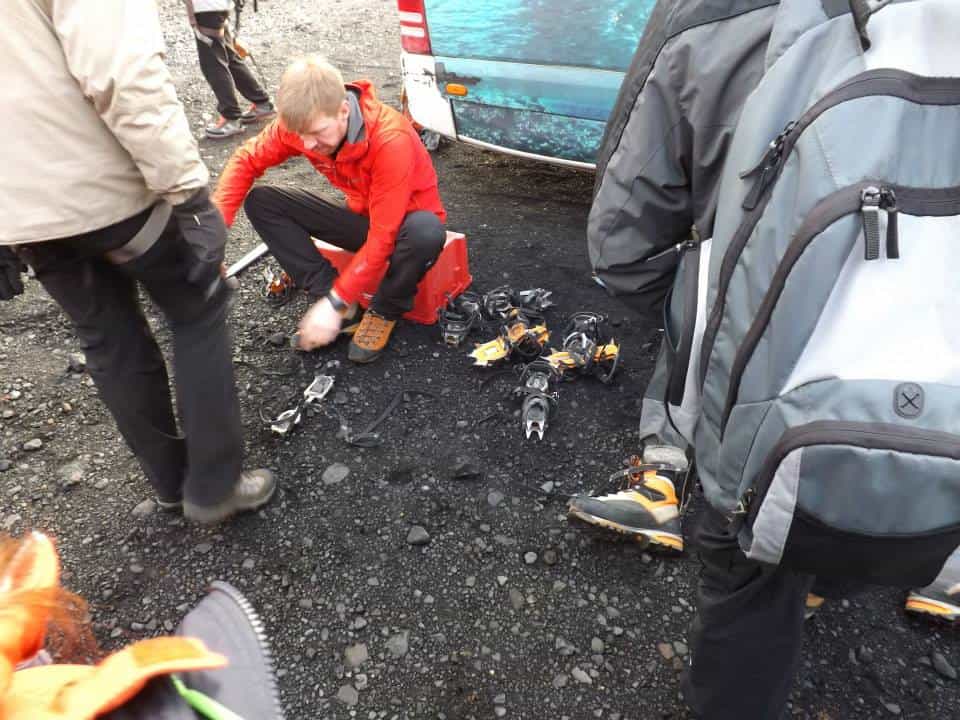 After some instructions and the distribution of safety equipment, we start walking. And walking. And walking. Later I get onto Google and find out just how far it is from the carpark to the edge of the glacier. It’s less than 1.5km (1 mile), but it sure felt longer at the time! Being a New Zealander, the terrain reminds me a lot of home – volcanic scree and moss covered boulders and crystal clear streams. 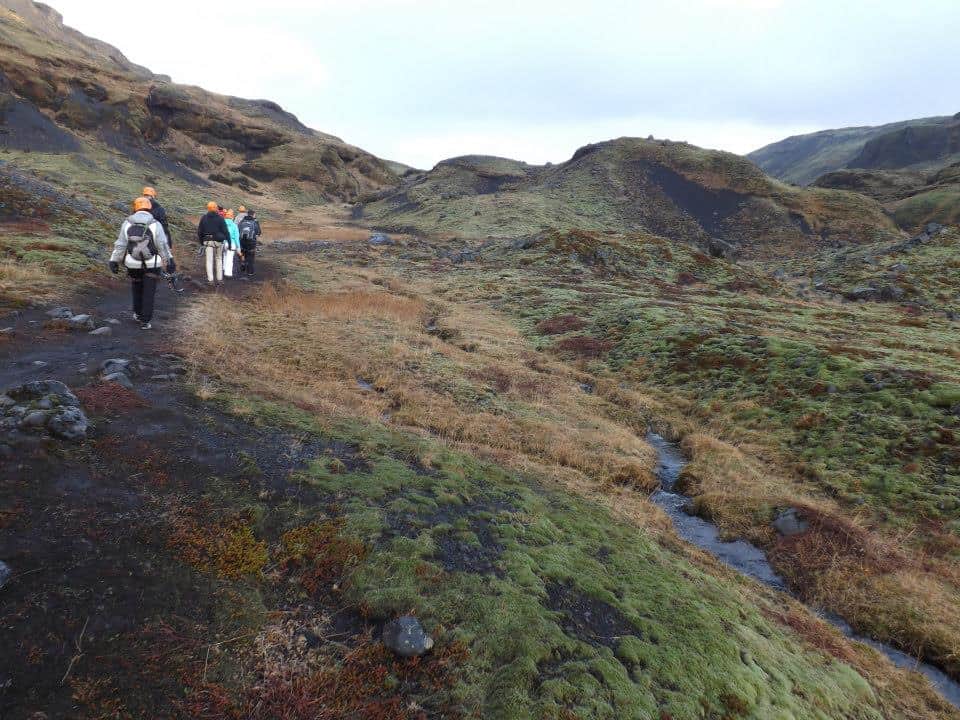 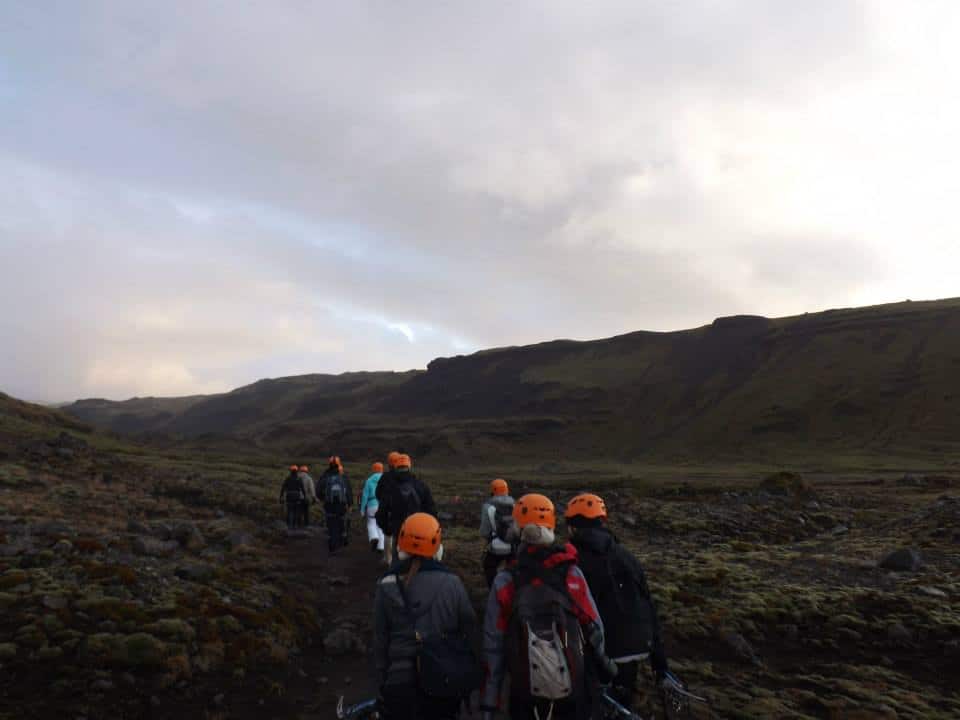 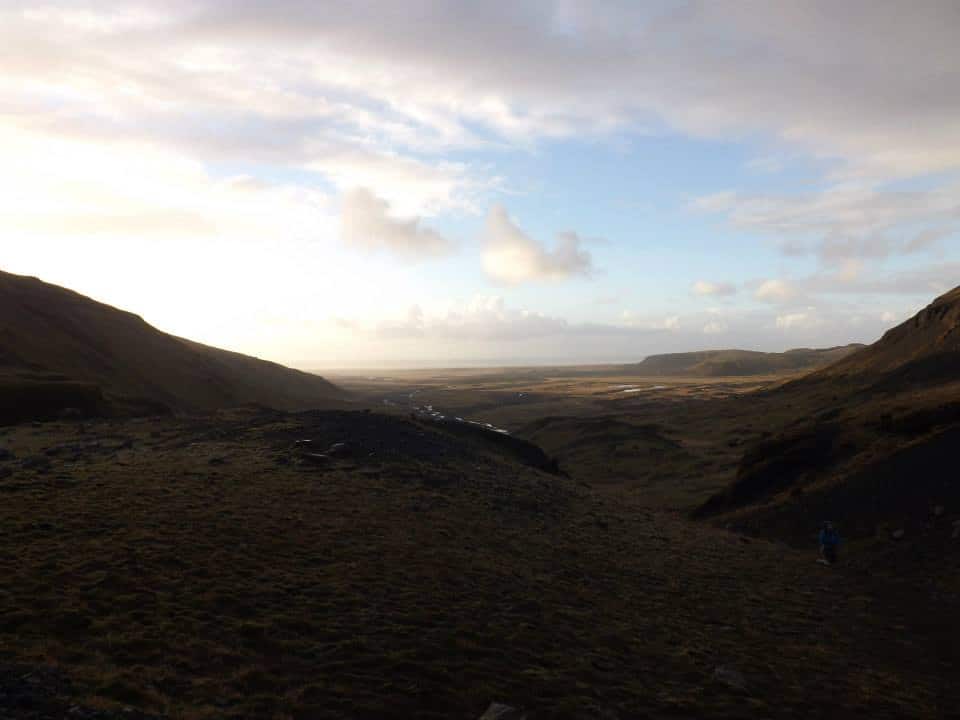 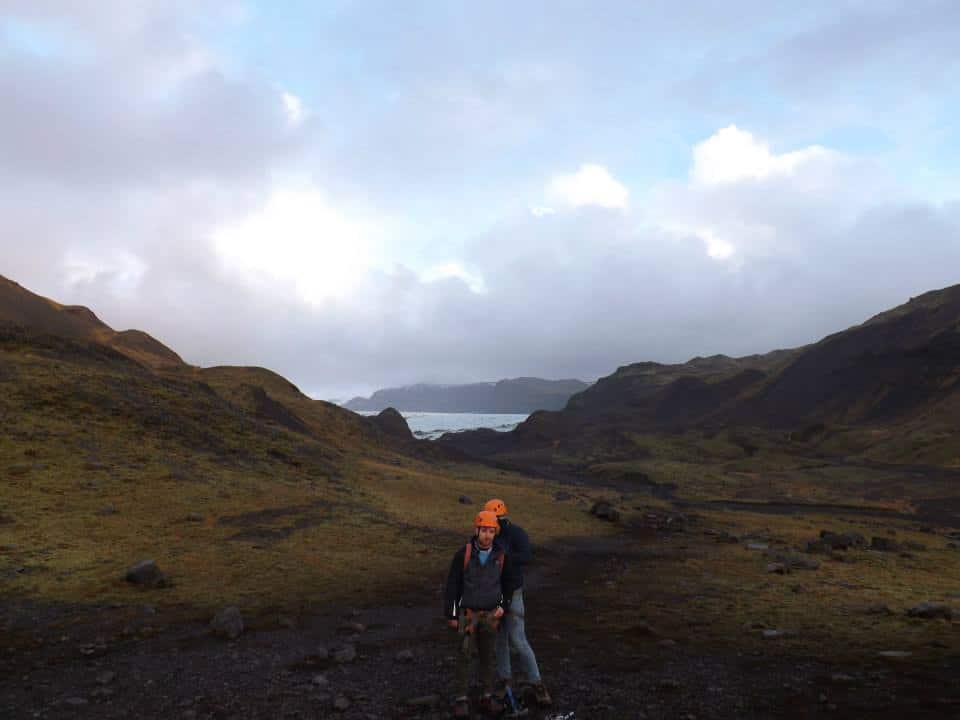 It’s not too long before the glacier appears in the distance – the white of the ice stark against the dark volcanic rock we’ve been traversing. As we get closer we can see that the white ice is not uniform and it is streaked through with darker colours. When we reach the edge of the the land we notice too that it is not flat or smooth: it has undulations, rifts and cracks. 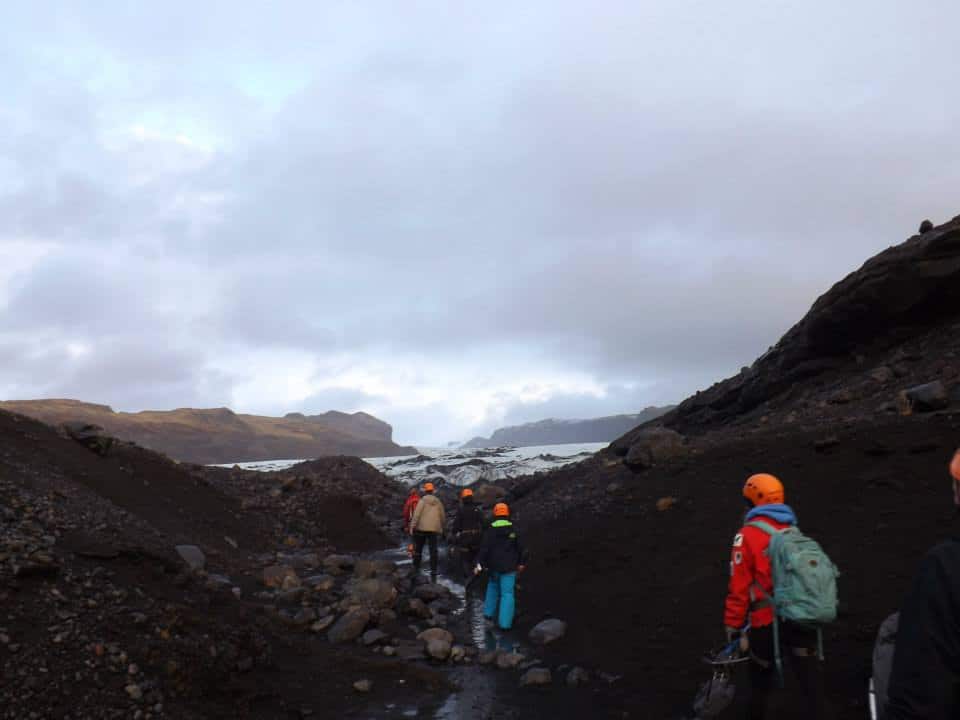 We stop on the high ground overlooking the glacier and could see another group already venturing out onto the ice. We fitted our crampons and had another briefing on what we were doing and how to walk with the crampons. It feels weird already with the tramping boots with their limited ankle movement, but with the crampons on as well it feels even more alien.

I soon learn you just have to take a little more care when walking – and that there’s no need for my initial exaggerated careful steps! After a final safety check on everyone’s crampons, we head down the hill and up onto the ice. 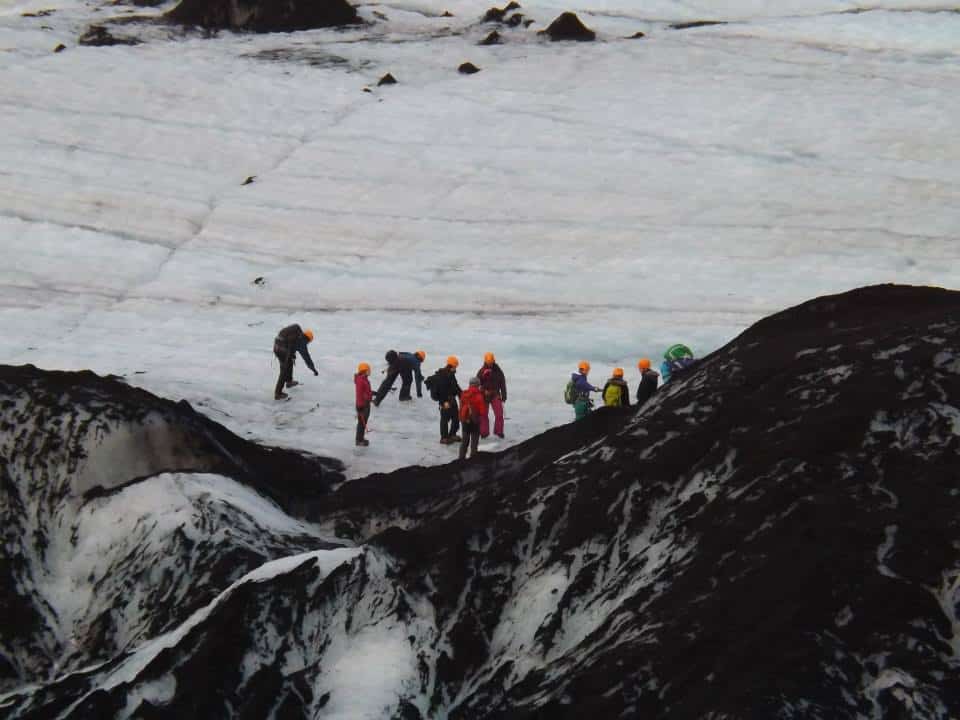 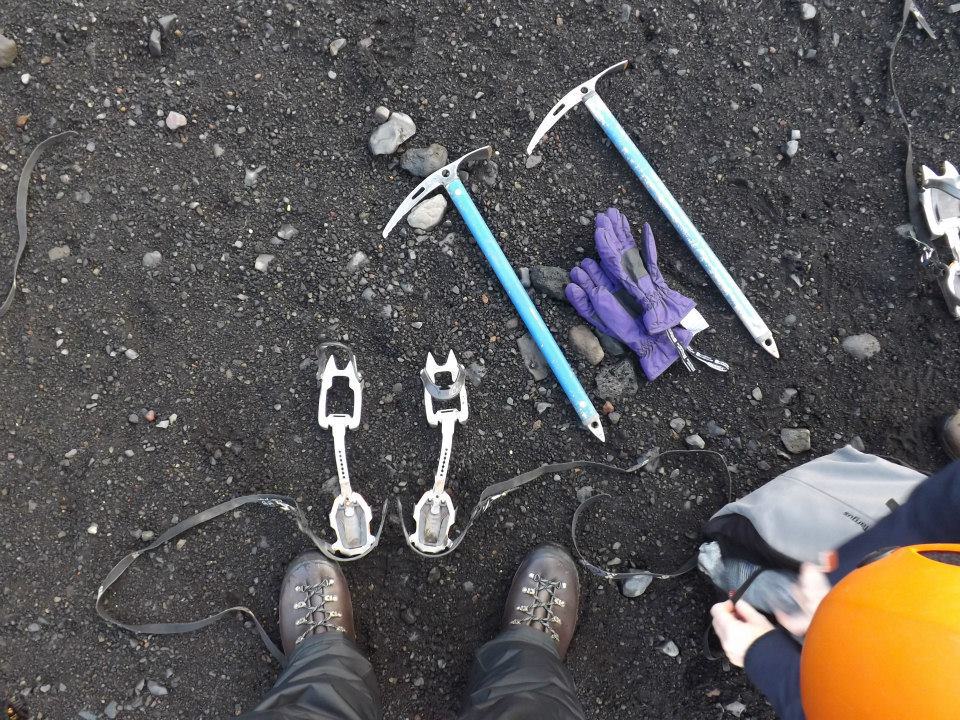 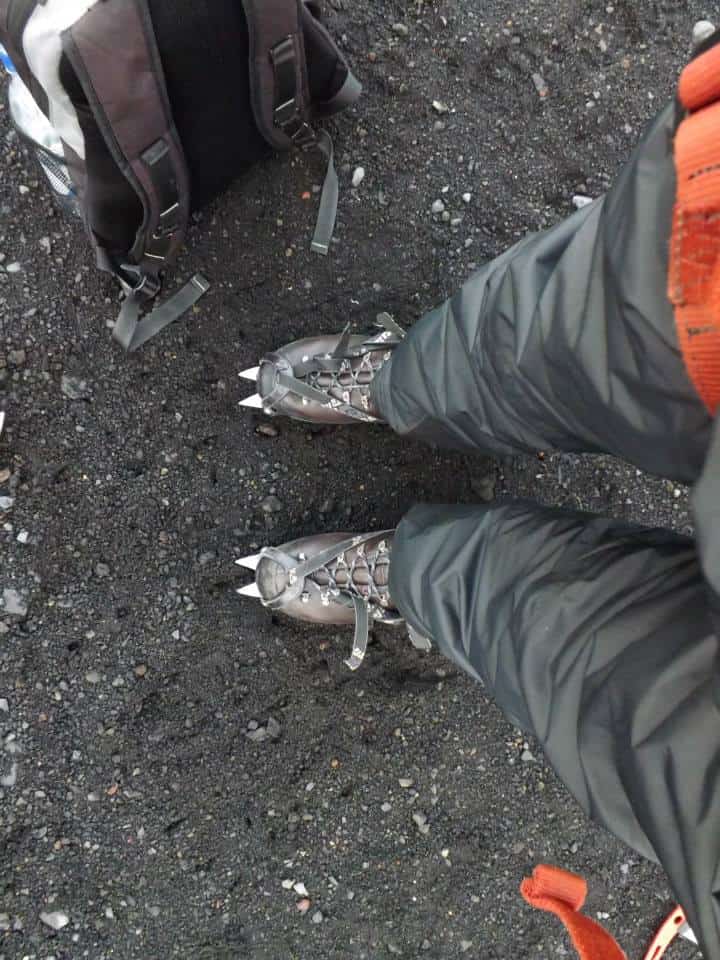 Wow! Walking with crampons is bizarre. I think a lot of it is to do with my mindset. In retrospect if I just thought of them as “anti-skid spikes”, I might have adjusted quicker. But the bulkiness of them and the fact that they are literally made to stick into things means I walk with way too much care for way too long. Eventually I find the rhythm and get used to them. 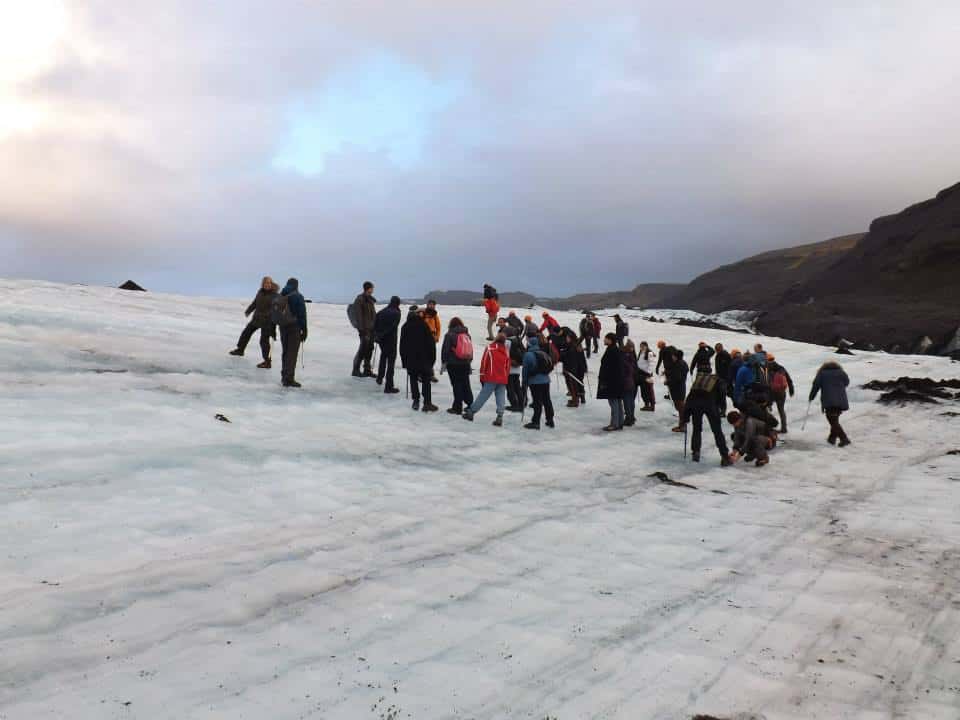 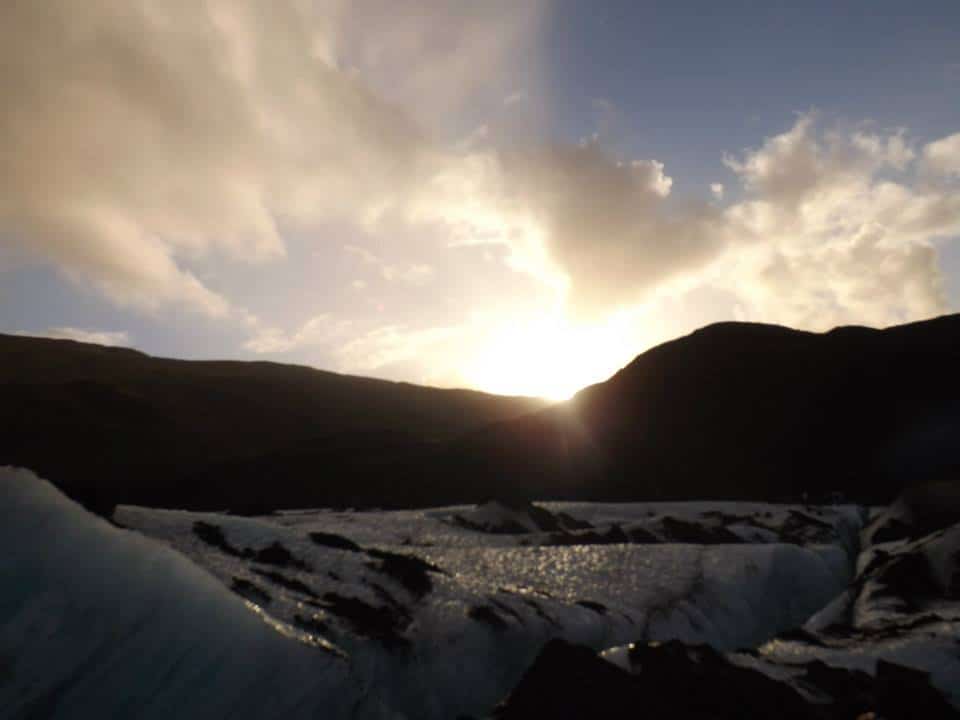 After a long trek across the ice we come to the face that we will be climbing. The guides set up the safety ropes then give us a last minute discussion of what not to do (ice axes are dangerous!). Then two at a time we go up the ice face. My travelling companion swarms up the cliff face like a mountain goat.

Then its my turn. I’m not the best with heights but I’m certainly not going to quit before reaching the top. The problem with me is that I don’t trust the crampons. Basically you have two spiky bits sticking out the front of your boot. You kick these into the ice, and then reach up and dig the ice axes into the ice. Then straighten up so all of your weight is on the crampons, and lift one of your feet up and kick it into the ice.

The reason you want to have hiking boots is because the sole of the boot has to remain rigid to allow you to kick the crampons into the ice. Any give in the shoe would mean the pressure from kicking would just make the shoe flex instead of driving the spikes into the ice.

Anyway, I managed to reach the top through sheer bloody mindedness and then put both ice axes in one hand and signalled the guide that I was ready to walk down. He belayed me (lowered using the rope) and I made my descent, pausing briefly for a cheesy and well deserved photo. 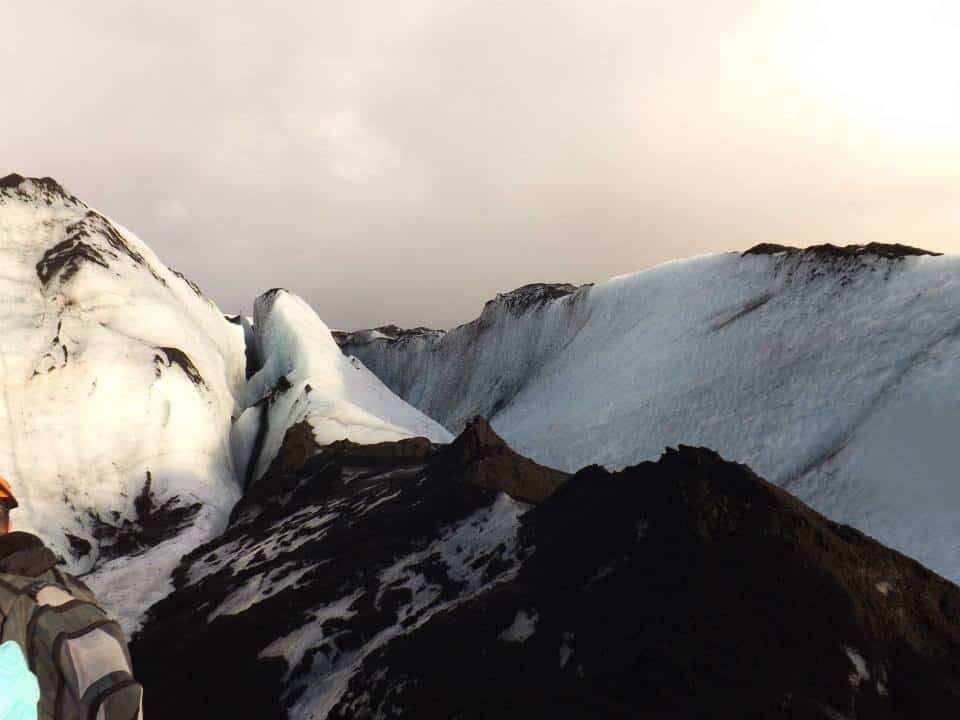 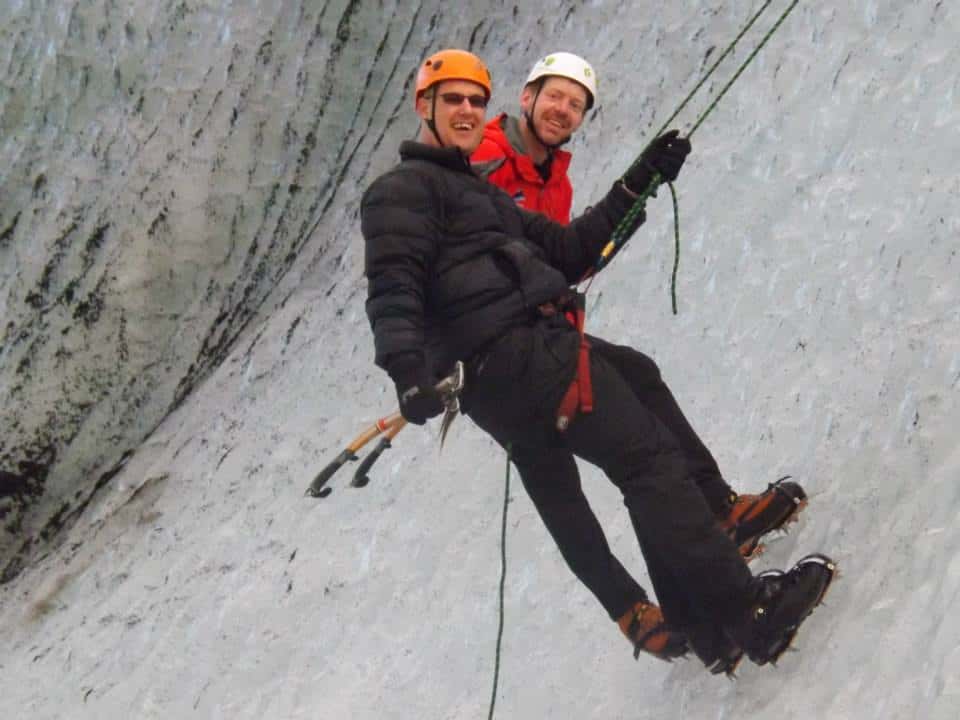 There’s nothing to do but wait for each of the other tourists to have their turn, and I’m watching one of the Canadian-Chinese couple having difficulties. If I thought that my pace up the ice was slow, hers is even worse – she hasn’t climbed very high at all and has taken 20 minutes to get there.

I’m too far away to hear what is said, but I can see from the body language that the guide is angry. He says something to the couple (by this time the guy has joined his partner) and I can tell that this is very upsetting to the climber and she is very quickly disconnected from the safety rope and sent away from the climbing surface. She passes us to find some space and seems on the verge of tears. Her partner follows closely behind. The guide gruffly calls for the next climber. 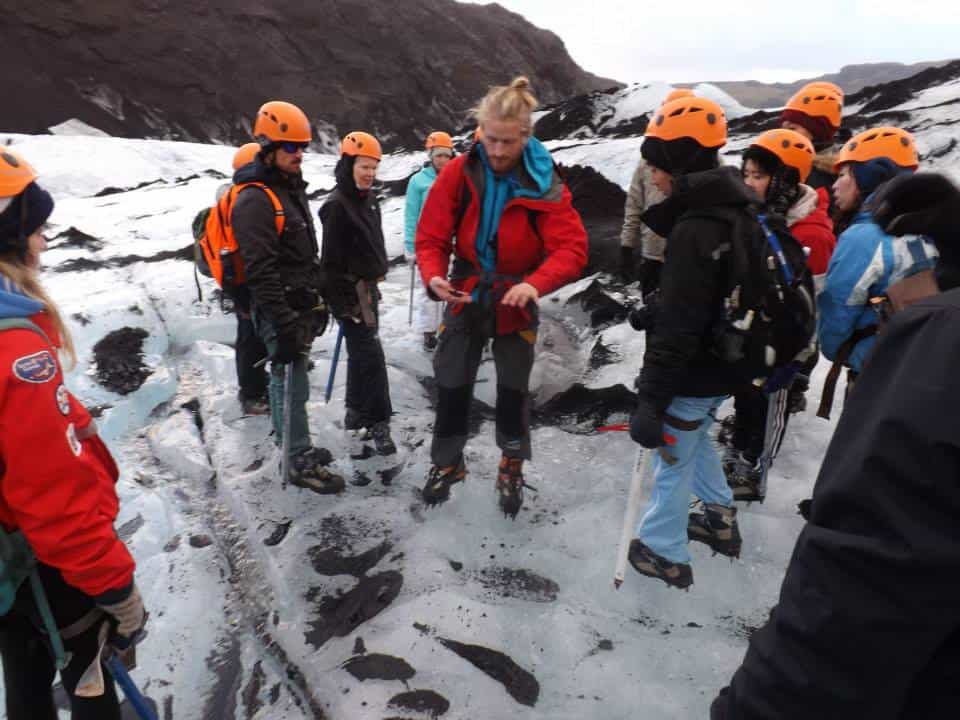 Eventually everyone has had a go and we continue further onto the glacier. The guides stop every now and again to talk about some aspect of the glacier or another and to answer questions. There are deep chasms which go deep into the glacier and we’re told to try not to fall in – or to drop our equipment into! The lake at the mouth of the glacier is full of melt-water and serves as a way of judging whether the glacier is advancing or retreating. In the winter with the additional snow and rain the glacier gets bigger and covers more of the lake – in summer more of it melts making the lake bigger and the glacier retreats.

The guides come here almost every day so they can see that with global warming the retreating goes further and the winter doesn’t add to the size of the glacier as much. We stop at a large chasm and one of the guides illustrates how deep it is by throwing some ice down inside it. His trust in his crampons is absolute as he stands very close to the lip of the chasm. It makes me nervous just watching him. I guess he knows whether the lip would fall away just by looking at it… The sun is starting to go down so we turn and head back towards the starting point. It’s freaky how the ice forms waves and I wonder whether its the wind carving away the ice to look like that or if its water that was frozen like that from liquid form. Neither really make sense to me and I forget to ask the guides. Close to the starting point we’re introduced to a mid-glacier lake where melting water disappears down a sinkhole. Apparently one trip a tourist lost their footing and rolled into the lake, and disappeared down the sinkhole! He survived – popping out in the lake at the mouth of the glacier, and was extremely lucky it was summer so didn’t freeze to death. Even in summer though, the water is extremely cold!

It’s dark by the time we de-crampon our boots and make our way back to the vans. Our guides ask if we still want to see the waterfall and surprisingly there are enough yes’ to make it worth our while. We’re given about 20 minutes to get from the carpark to the waterfall and despite the darkness I still take my camera. I play with the settings and manage to get some shots despite the gloom. So what did I think?

I think it was well worth the price it was a great experience but remember one thing – this is a tour run by ice climbers, it’s not a tour run by tour guides. What I mean by that is that you run the risk of not being picked up, of people being cross with you for having the wrong shoes – you’re not going to be babied. But because they’re proper ice climbers, you know you’re going to have as safe an experience as it’s possible to get.