There’s plenty of choice when it comes to Hop-On Hop-Off San Francisco bus tours, and they all seem to have a stop at Union Square. It’s a little amusing seeing them all accosting tourists as they pass the corner, staff dressed in their respective company-coloured jackets. 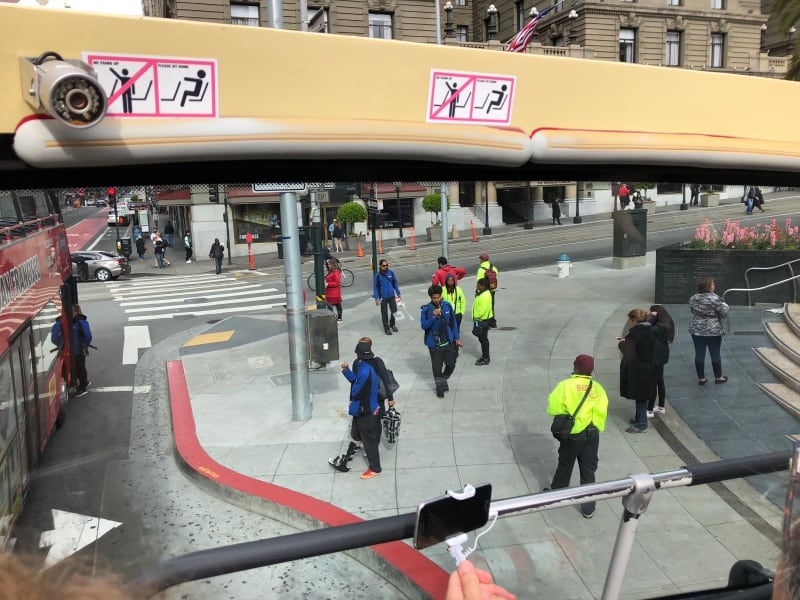 Unlike Auckland and Nice, the commentary on the San Francisco Hop-On Hop-Off tour is informative, well paced and above all interesting. We tick off a lot of the places we wanted to see, and if time had been kinder to our schedule we could have used the bus to visit the spots we weren’t able to go, like the Painted Ladies (pastel coloured town houses). Here are some highlights: 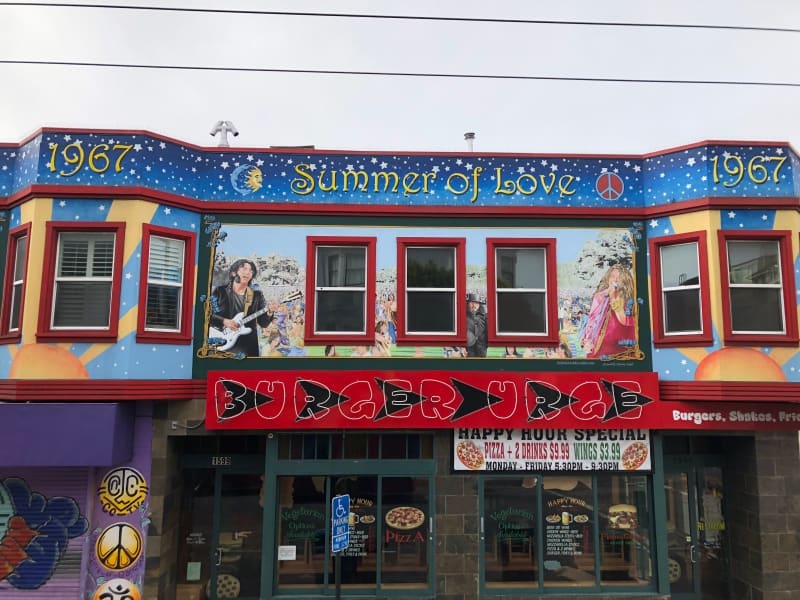 The first area of note was Haight & Ashbury, the intersection that served as the epi-centre for the Summer of Love back in 1969. As we passed through the neighbourhood, it really did look as you would have imagined the centre of the counter-culture revolution of fifty years ago would look: tie dye and rainbows, alternative medicine, marijuana dispensaries and street art showing reverence for the artists of those days… and weed – lots of weed. A very colourful neighbourhood!

We then went through the Botanical Garden before reaching the Golden Gate Bridge. It’s a broad spectrum of plants covering a huge 55 acres built up over more than 75 years, and the land was  originally sand dunes. 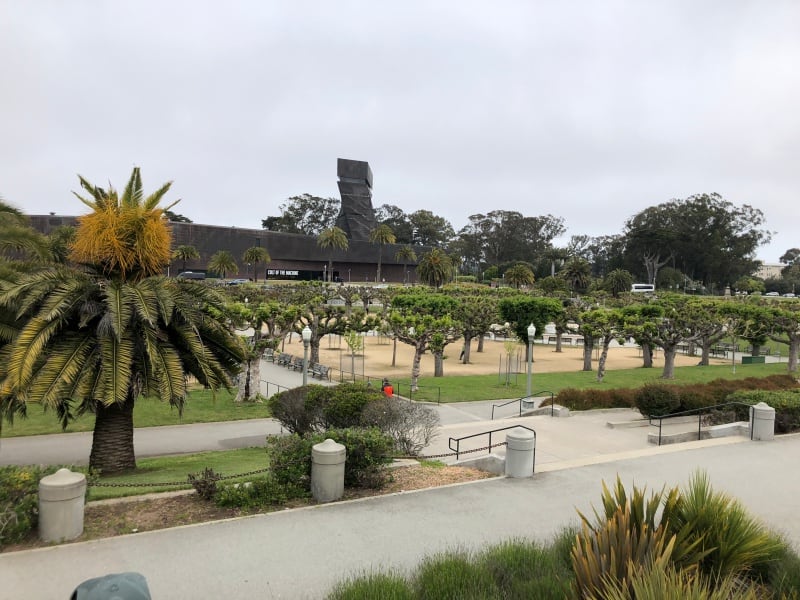 But we were on the bus for the primary reason of going on the Golden Gate Bridge. The original plan was actually to get hire bikes and see the views by biking over the Bridge, but the day was blustery and the wind had an edge to it which meant that cycling would not have been much fun. 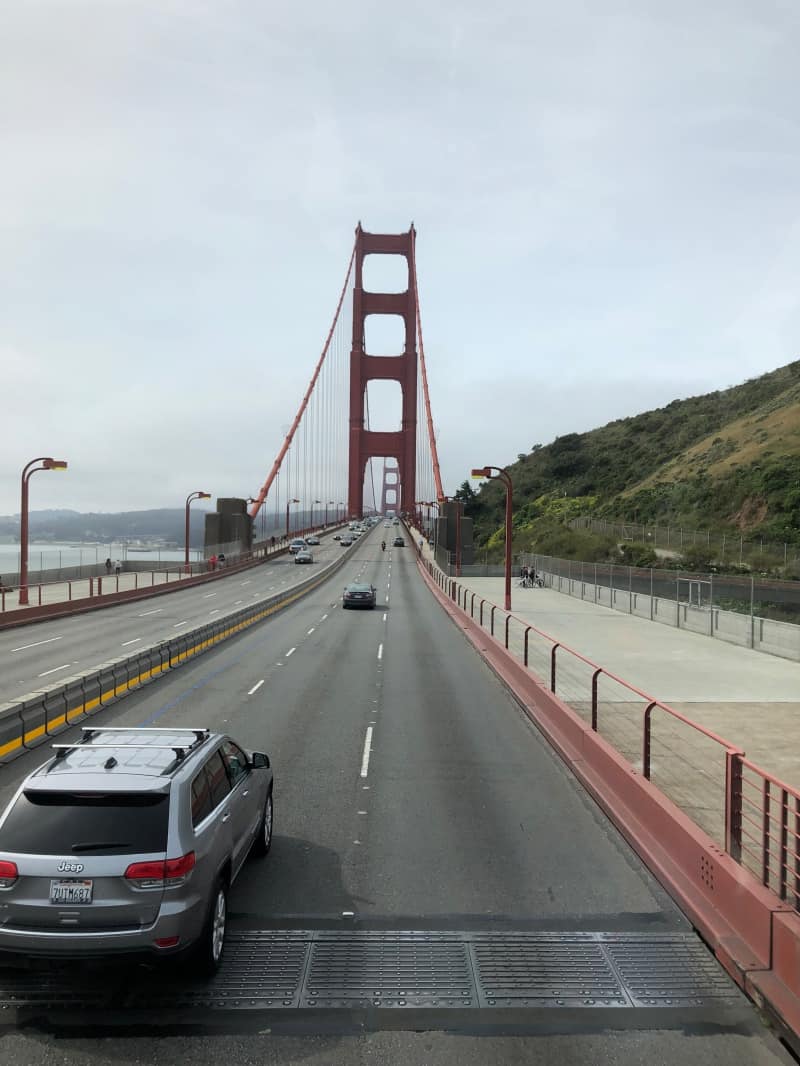 The Big Bus tour however, let us really take in both the view from the Bridge back towards San Francisco, as well as of the Bridge, seeing the red metal up close and personal. 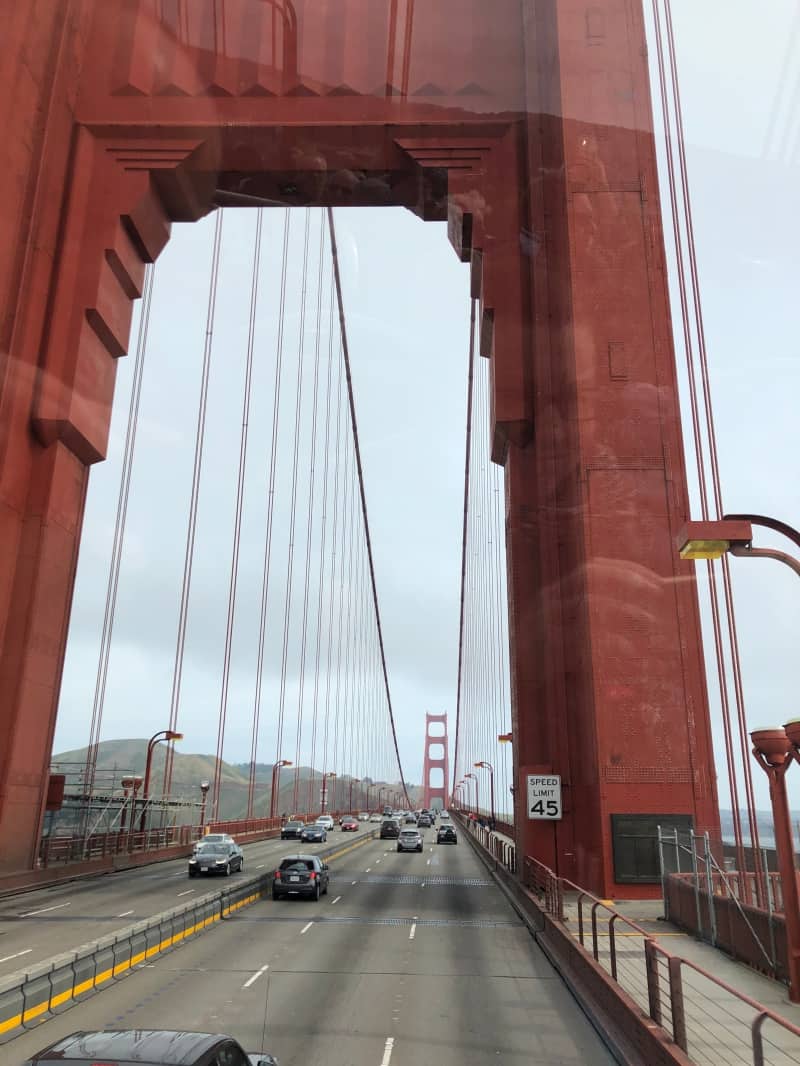 We were tempted to get off the bus at the viewing platform on the North side of the bridge, but I didn’t think the view would be any better than what we could see fro the open deck, and with the cloud and fog conspiring against the views of San Fran, we decided to stay on the bus and continue on.

We did discuss doing the additional Big Bus tour on to Sausalito, but were also pressed for time, so passed. Sausalito is a sheltered bay-side settlement just over the Bridge with an interesting past including, rum runners in the prohibition era, wars between the rich folk living on the hills and squatters living in house boats (the HouseBoat Wars), and the constant presence of military forts controlling both the seaward and harbourside approaches to the Bay. 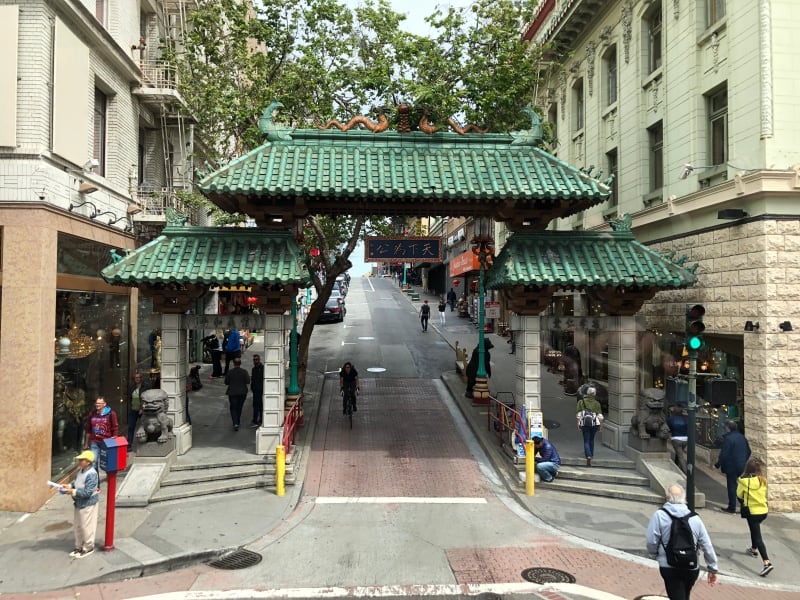 So, back across we went and past the Marina District into town and through China Town, the biggest and oldest ChinaTown in North America.

San Francisco has a long history with Chinese immigration prompted by the California Gold Rush and the building of the Transcontinental Railroad.

We get off at Pier 39 and head off for some more touristy things and when we get back on we discover that instead of an automated commentary, we had a guy with a microphone standing on the top deck. He says his name is Soda Pop and for the next stop he regales us with great stories and humour.

He looks like you’d imagine a citizen of the most counter-culture city in the U.S. would look: piercings and tattoos everywhere, but he has a comfortable energy – not aggressive at all. He gets off at the Information Centre and heads off to lunch and we swap buses to continue our route.

While we wait for the next bus to move we check out the Information Centre. A steady stream (ok three people) poke their heads in and asks when Soda Pop’s next bus was leaving – proof of how well his San Francisco bus tours resonate with the tourists. Unfortunately we couldn’t wait for his bus but instead moved on. 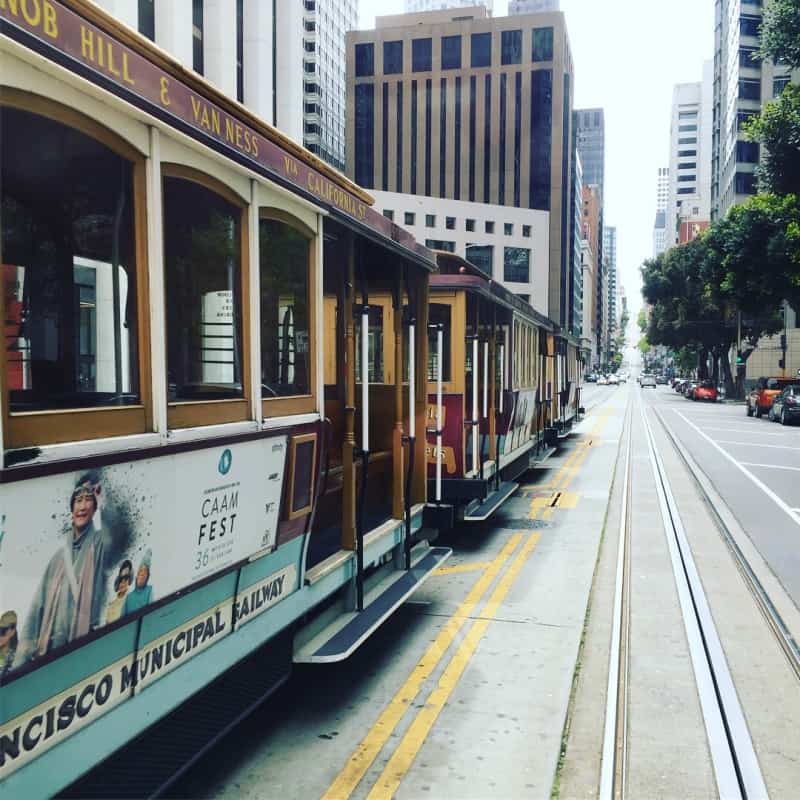 Our last leg on the San Francisco Hop-On Hop-Off tour was supposed to take us all the way back to the hotel, but we discovered that we were going past the terminus of the California line of the cable cars so we jumped out at the CBD stop instead.

So that’s our experience of the Hop-On Hop-Off Bus San Francisco – they also do a Sausalito tour and a night tour that by all accounts are very popular if you’re keen.

We’re great fans of Hop-On Hop-Off bus tours: we find them good ways of contextualising the city you’re visiting and how all the attractions fit together geographically. Big Bus Tours San Francisco is a great example of that and both automated and live guides were well worth a listen.

The Classic Big Bus tour ticket is $55 ($49.50 online) and takes 2 hours 20 minutes for a complete circuit of the 20 stops. It runs every ten minutes during summer and every twenty during the winter, beginning at 9:00 at the San Francisco Visitor Center, with the last bus leaving at 5pm.

San Francisco Travel provided free Big Bus Tour passes for our trip to San Francisco. All opinions are our own. 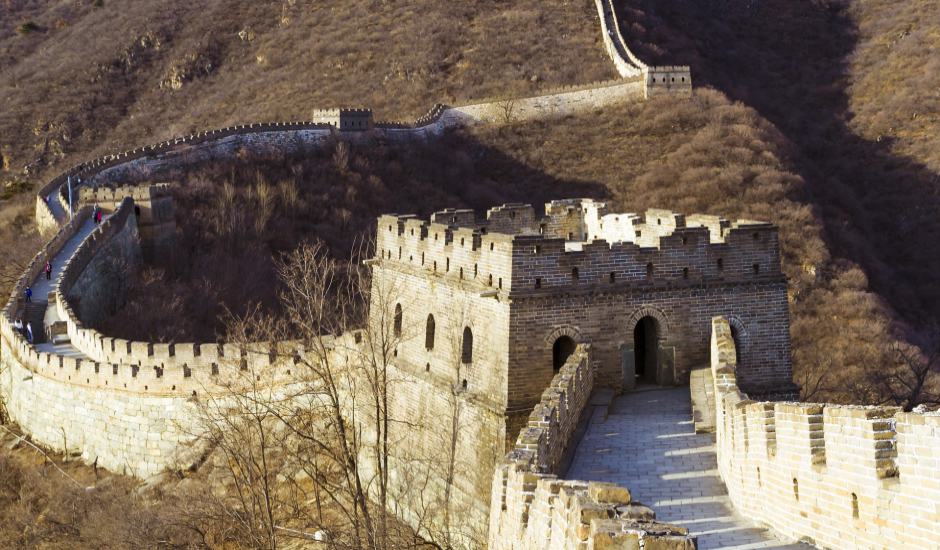 Walking the Great Wall at Mutianyu 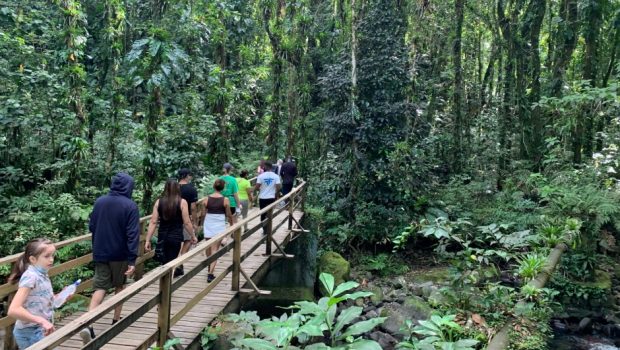