We woke up early to head out to Mutianyu for the Great Wall. As we left the outskirts of Beijing we were no longer under the haze of the smog – though our hosts were most insistent that it was in fact fog! The carpark at Mutianyu leaves you to walk up a little township of refreshments and typical tourist trinket stores to the main entrance where you buy your tickets. And that’s where the choices begin. 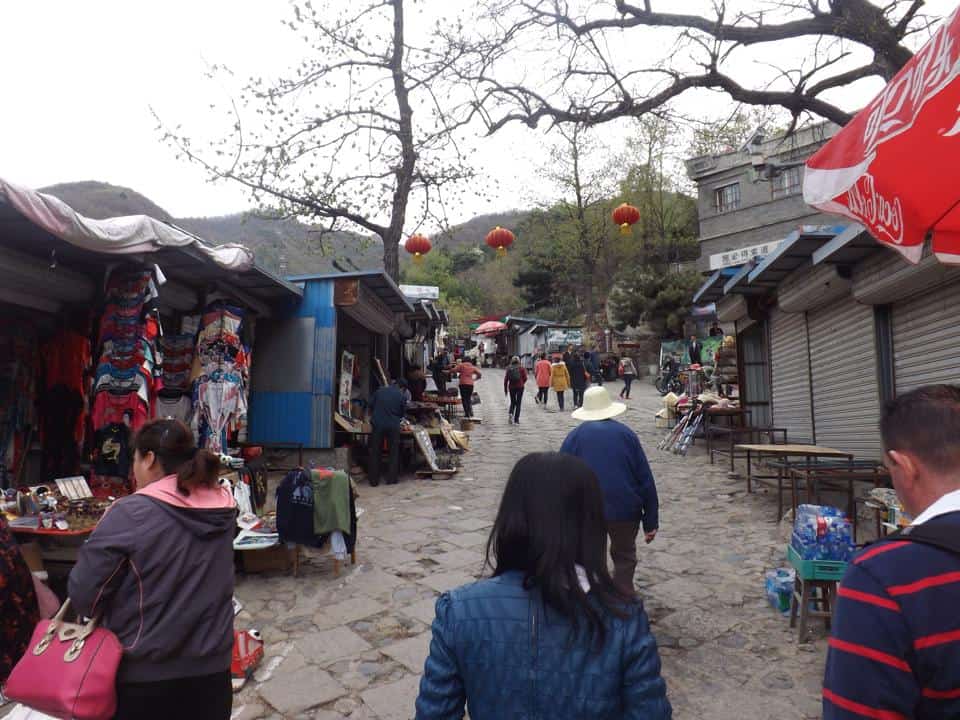 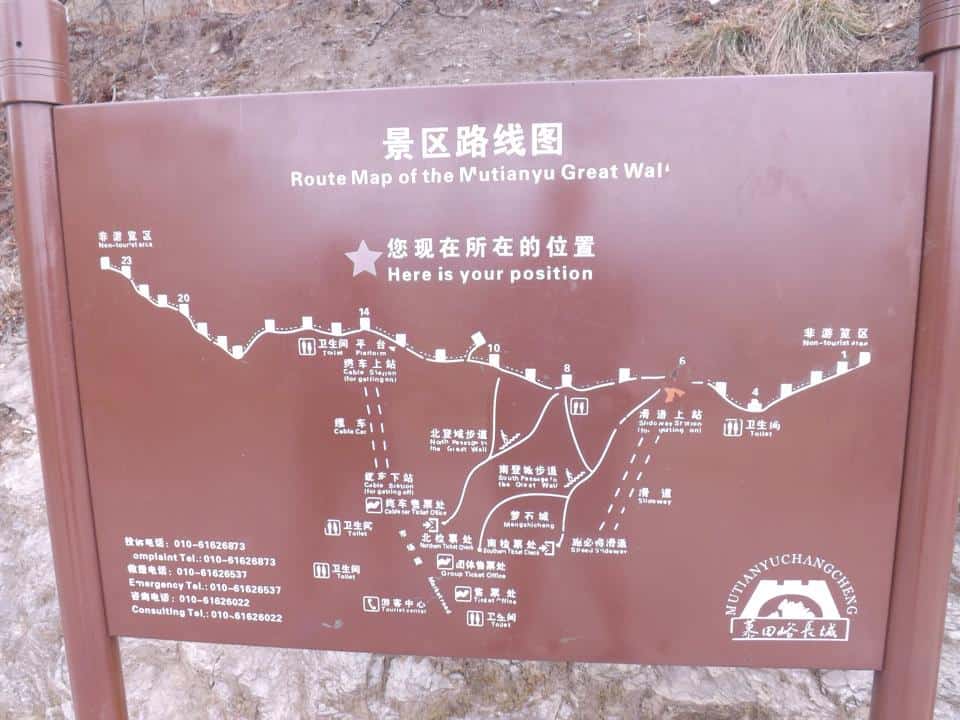 You can choose to either walk up to the wall or take the cable car. No-brainer there – why waste energy walking to the wall? Then you have to choose whether to take the cable car to Tower 6 or Tower 14. Unfortunately the two cable cars are run by different companies, so you can’t go up to Tower 6 and back down Tower 14 on the same ticket.

The good news is there is a toboggan down from Tower 6 as part of that cable car ticket. 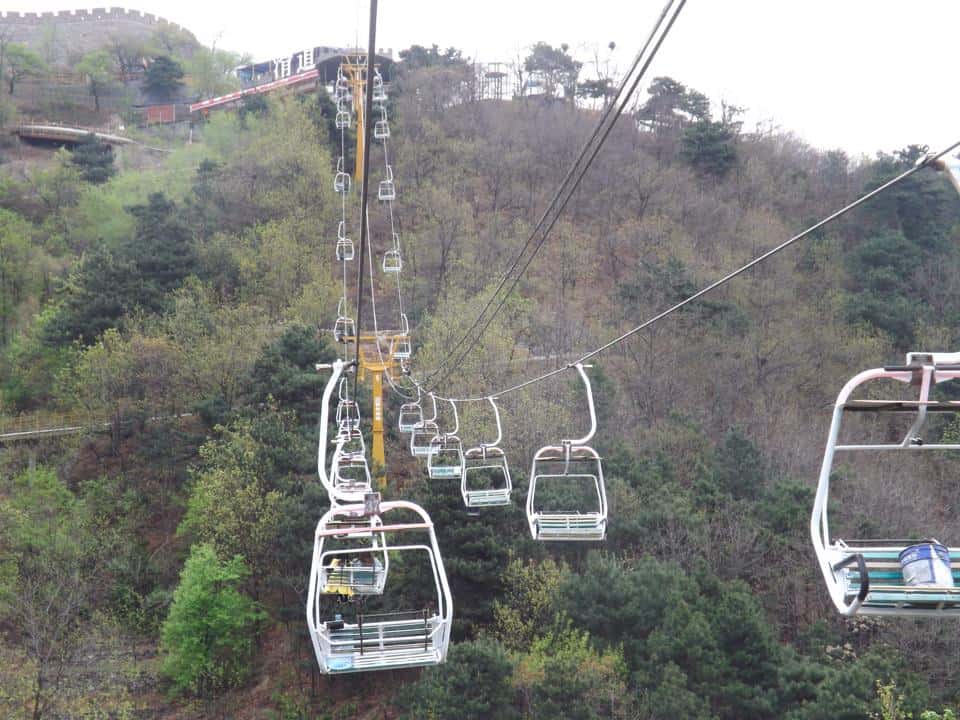 So we grab a combo to Tower 6. Our guide accompanies us to the Wall and then briefs us on what is in store for us and then tells us where to meet her and the driver. With that she leaves us and heads back down. We’re on our own. We have yet another choice – we can head right and go the short route to the end of the wall and then head back up, or we can head uphill to the left while we’re still full of energy. We decide that if we still want to see Towers 1 – 5 then we can catch them on the way back, and we head off uphill. 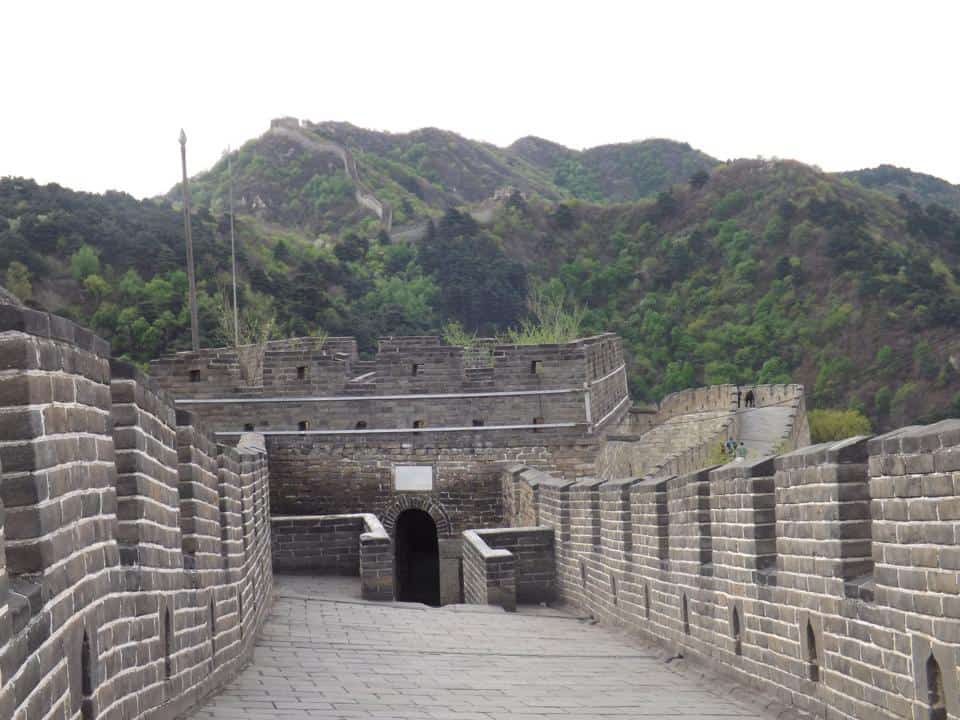 The wall is sparsely populated with people – mainly locals, and a good mix of people who look like they’re here for a nice walk and proper local tourists. The sun has decided to say hello and I regret not wearing a hat. It’s a good problem to have as it means that we’re away from the smog.

I don’t know why, but I am absolutely thrilled to be here. This is the Great Wall! The undulations of the hill line are reflected in the stone at the top of the wall and so the way is definitely not flat. Steps up and down and gentle inclines make a hundred meters feel like five hundred. I look out across the forest and think about soldiers being stuck up here watching for invading Mongol hordes two thousand plus years ago. 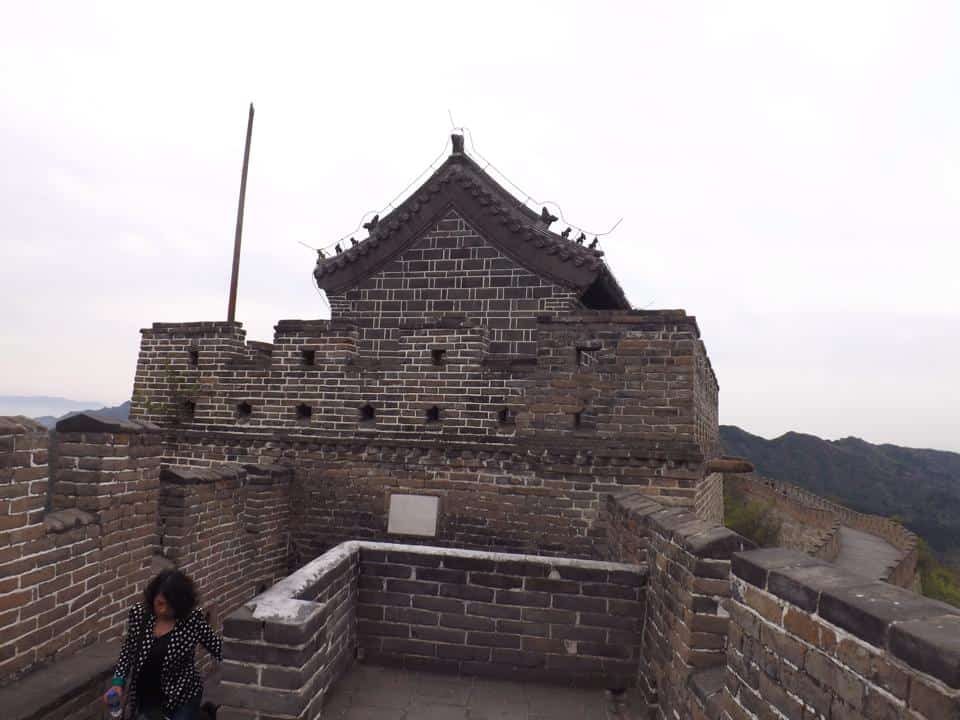 The Towers aren’t really much – back in the day they would have been shelter and housing for the watching patrol who would have signalled the main force back in the nearby town should there be any sign of approaching trouble. Then the army would march to the area of the wall where they were most sorely needed. For our walk we tick them off as we head towards Tower 24 – the end of the wall at Mutianyu. 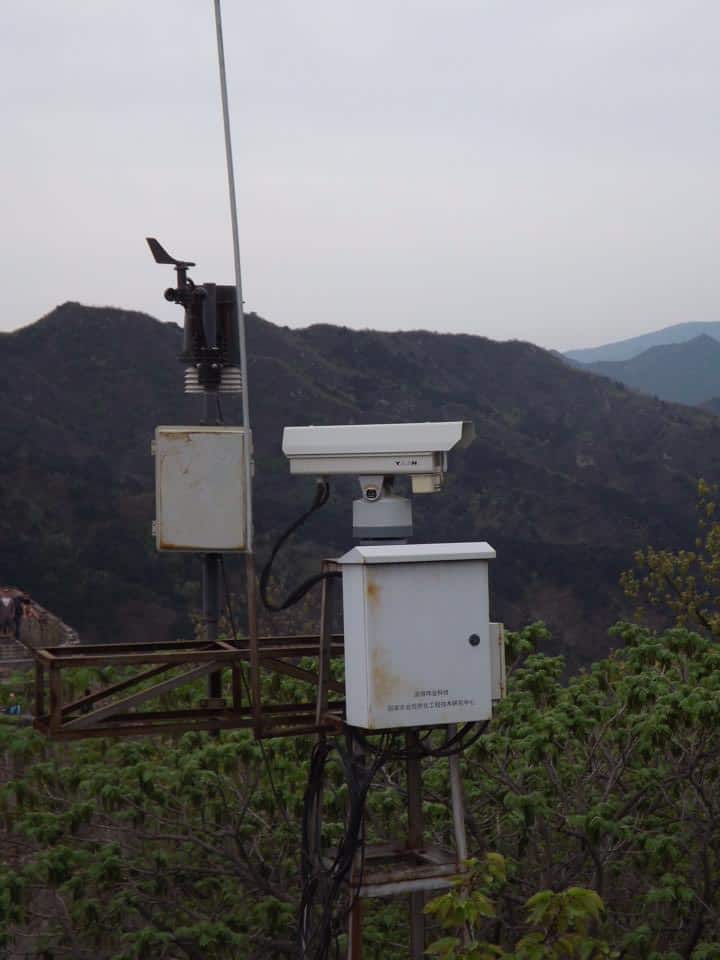 I make the joke that the times may have changed but the Chinese are still on the lookout for invaders. The camera can swivel around at least 270 degrees so even though it’s pointing out towards where the Mongols would have approached from, I’m pretty sure its to keep an eye on what’s going on on the Wall. 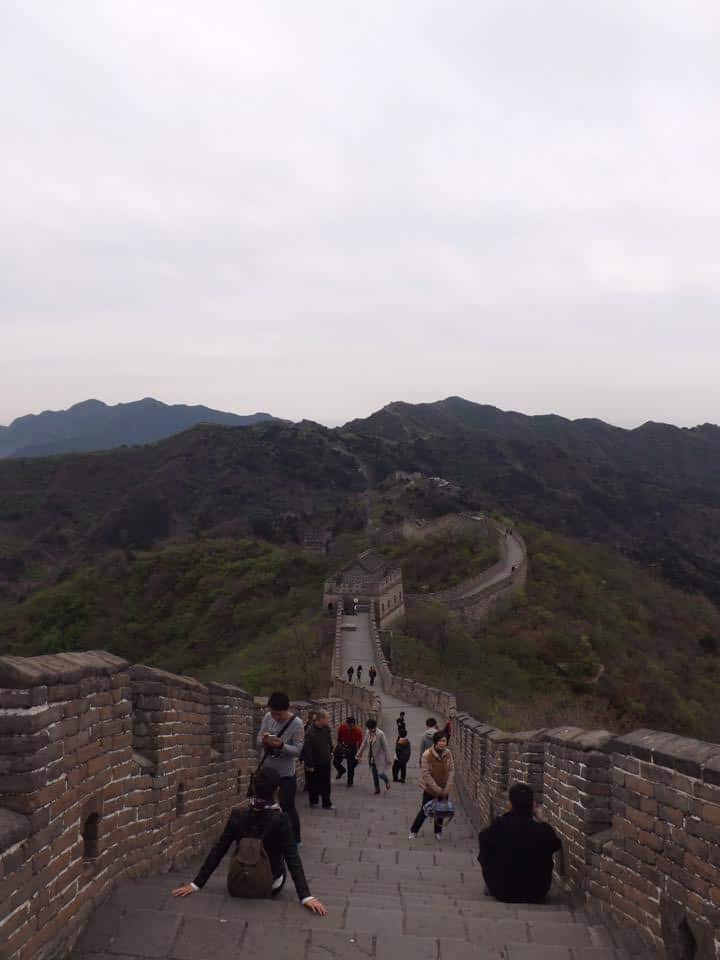 By the time we’ve reached Tower 14 the local tourist numbers have increased significantly – presumably those who came straight up the cable car. Not too much longer afterwards we reach a particularly nasty section of the wall:  a stretch of stairs at a vertiginous angle. 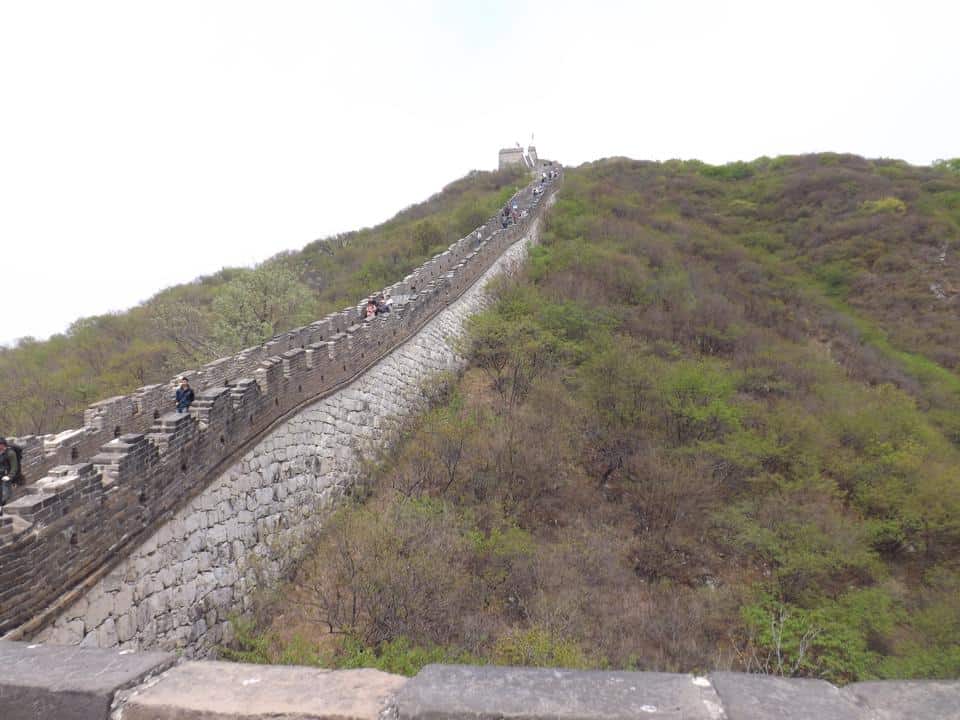 The Tower at the top of that stretch is a welcome rest area and has great views. A few street vendors have set up shop there with one selling water and beers and another selling flags. I must admit we’re feeling pretty happy with ourselves for getting this far. The flag salesperson suggests we take a photo with the Chinese flag which we’re only too happy to do. We’re surprised when he has a New Zealand flag – they only have about twenty to choose from but I guess we come in large enough numbers to make it worth their while to stock them! 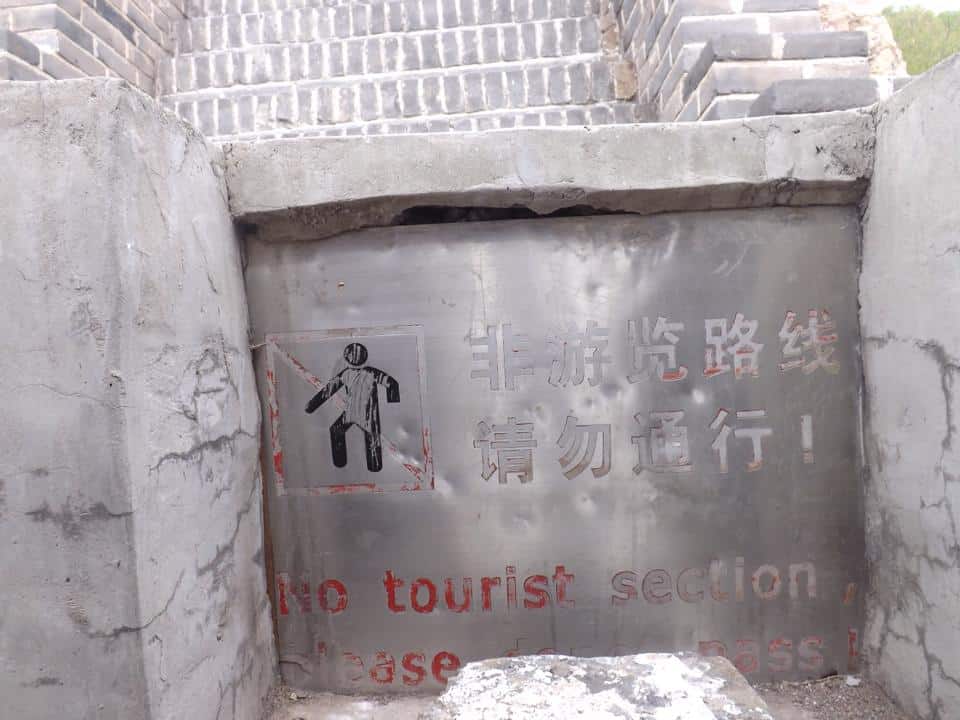 We’re looking around and the wall seems to continue, but we find a warning sign indicating that this is the end of the line for tourists, and that no-one should pass. Which we of course duly obeyed and turned back to retrace our steps. 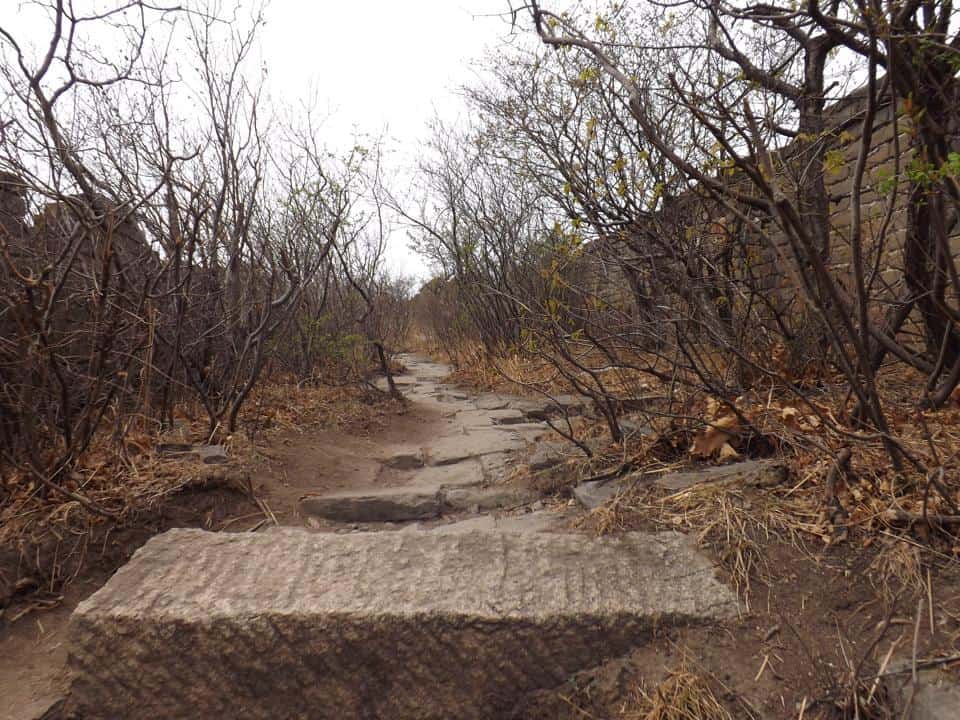 But if we had continued on, then this is the sort of thing that we might have seen. Trees growing in the shade of the walls on the edge of the path. Dusty dirt barely held together with raggedy yellow grass encroaching on the paving stones. 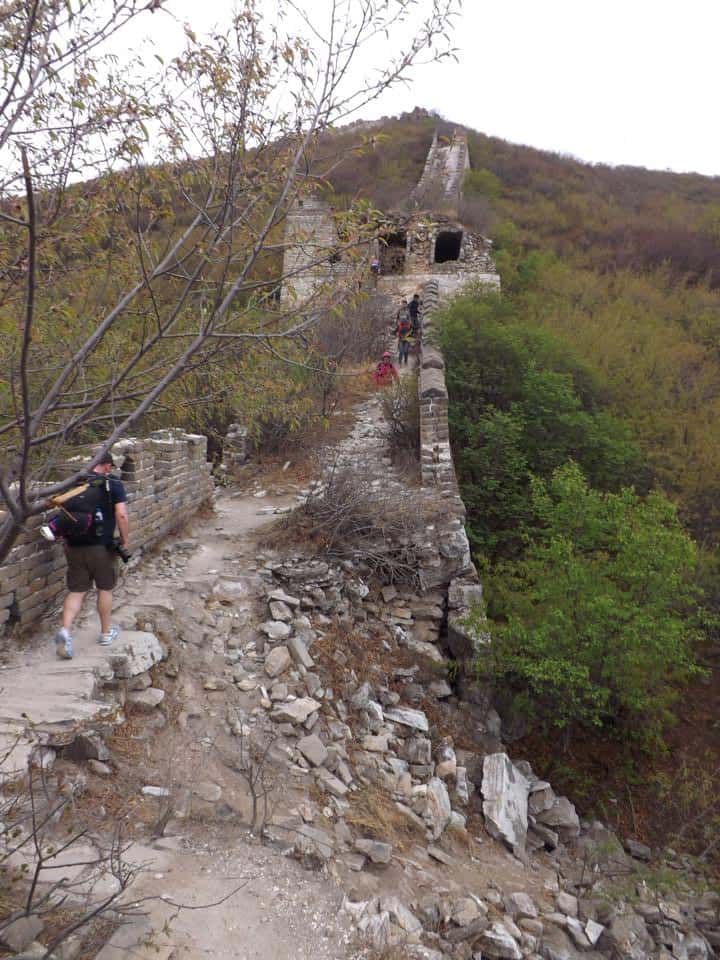 If we had continued even further, we may have seen parts of the wall collapsed and allowing access to the hilltop. The Towers up this far are semi collapsed as well. 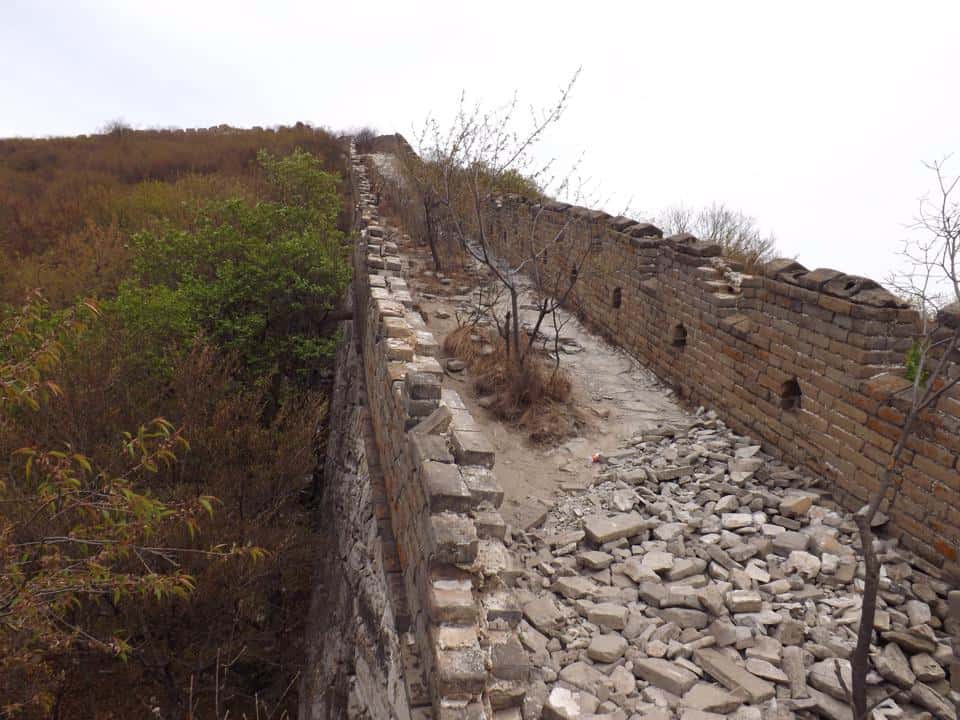 And then the most interesting part. Our legs are aching, but we’re bloody-minded enough to want to reach the end. While there are other more steep sections of the Wall, this bit is diabolical. The trees have grown up through the paving stones, buckling them. Then gravity takes over and they slip away downwards.

The trees and grass aren’t sufficient to keep the dirt in place so you’re either trying to climb sandy dirt at a 45 degree angle, or else treacherously detached paving stones which may or may not decide to support your weight. The trees are surprisingly strong as I find out by arresting my downhill slide and then losing my footing and coming to a crash at its base. No harm apart from ego. 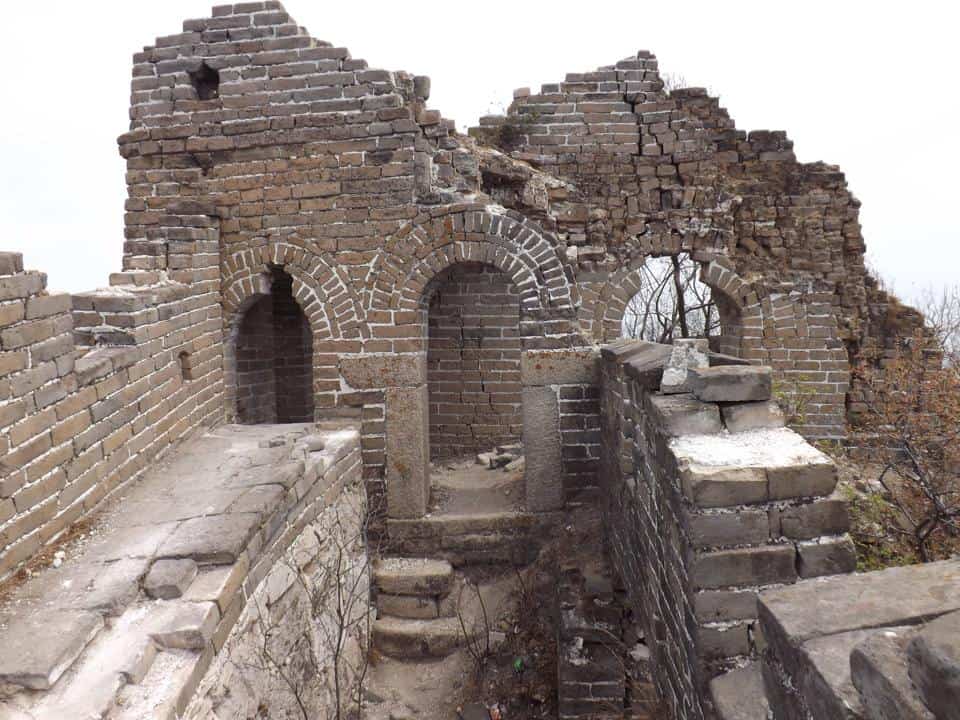 We continue on and eventually we reach the end. The sense of accomplishment is surprising and I share a handshake with Ben and we take a few minutes to rest and take in the sights. The last tower is in surprisingly good shape – many of the others on the way have been in much worse condition. From the last fort we can see in the distance another section of the wall. I find out later that this is accessible from Jiuyanlou and we can see people at the top of towers and picnicking at the end of the wall. It gives a sense of the scale of the Wall – while it can’t be seen from outer space (seriously – you can’t see eight lane interstate highways, why would you be able to see a twenty foot wide wall?), you can start to get a feel for the multiple layers of wall built over the centuries (see map by Maximilian Dörrbecker above).

After a sufficient rest we turn and start to make our way back to the cable cars and then I discover we have made an error in judgment. The muscles in my legs have tightened from the rest – if I had been smart I would have stretched before resting, but instead they have decided that they didn’t like the trip out here (oh – and stretching to begin the journey would have been smart too) and have decided to go on strike. That wouldn’t be a problem on the regular part of the Wall but up this way there are some treacherous sections and you kind of want to have full control of your legs for them!

It’s very hard work on the way back – legs quivering on the down hill sections and complaining on the steps up. It’s a toss up which is worst – the dusty section with the loose and sliding paving stones or the well paved section closer to the cable cars which has the added advantage of more kilometres of post-tightening distance.

We pass Tower 14 and because our tickets are for the cable car/luge we have to keep going to Tower 6. Each step is agony but we manage to get to there and then have to make a decision. We’re both keen to take the luge down, but the line is considerable.

We wait maybe 10 minutes before Ben says he’s going to go down the cable car instead. I look at the path back up to the tower level which is required to reach the cable cars and think that an uphill walk isn’t going to be pleasant. I tell Ben I’ll meet him down at the bottom and wait for my turn.

I kind of zone out and only snap out of it when I realise someone is yelling at me in heavily accented English. “Single? Single?” I eventually decipher. Uh, yes. I manage and am ushered to the front of the line. Apparently there are a group of three tourists and they need someone else to make a four. Fantastic!

I get on the luge and get ready to zoom down the hill with the wind in what’s left of my hair. But! Despite a myriad of signs saying not to go slow or to take selfies, I am stuck behind someone who insists on doing both. I only just resist the urge to reach ramming speed and bulldoze us both down the course.

Eventually we reach the bottom and I find Ben and our guides and we head back to the hotel. I am convinced that we must have walked at least 20km (12miles) – 10 to the end of the Wall and then another 10 back. I’m completely thrown by the fact that it is not even 5km in each direction!

Yes. The Great Wall is a bit of a strange tourist attraction – for a start its not just one thing: as the top map shows, its a conglomeration of different walls in different places built over an extended period of time. Because of that your experience with the Wall is going to be very dependent on which section of the wall you visit, how built up or wild you want it and how much hiking you want to do. You can even dive into a man made lake which has submerged part of the wall! Up, Up and Away: Albuquerque International Balloon Fiesta