The National Park Service runs shuttle buses to and from population centres near the Grand Canyon: joining places like Flagstaff, Page and Las Vegas with both the North and South Rim of the Canyon. We’d therefore booked tickets from Flagstaff to Grand Canyon and Grand Canyon to Page using them.

About four days before travel we got an email stating that they’d decided to stop running those routes, sorry! Fortunately we found an alternate provider from Flagstaff to Grand Canyon and just had to figure out the Grand Canyon to Page leg.

The shuttle dropped us off outside Maswik Lodge and the driver pointed out where the local shuttle bus stop was. He noted our luggage and mentioned that they might not take us with that. When the bus did show up we could see why – it was jam packed. We popped inside the Maswik Lodge instead and got the guy at the Transportation counter to call us a taxi.

The taxi driver seemed nice enough and I asked him whether he’d be interested in taking us to Page the following day. He checked what time we wanted to go and said that he’d check with his flatmate to see if he could borrow their car and get back to us.

Even if he couldn’t do it he’d check with his co-workers to see if someone else would want to do it. He gave me his phone number so we could connect later in the evening and dropped us off at our hotel.

After checking in and getting settled into our room, we headed over to the General Store, the local supermarket. It was an impressive size and seemed to sell pretty much everything. It was good to know that if we didn’t like the restaurant at Yavapai that we could head over and get something from the Store.

We then headed over the road and caught one of the shuttle buses, trying to time our trip so we could catch the sunset. There were two routes (ok, three with the green one), independent except where they transferred at the head of the Bright Angel Trail.

The bus drivers are good and coordinate their routes. This means that the blue route (our bus), which serves the township, typically pulls up to the transfer station to find a red route bus waiting at the transfer point ready to take visitors to the western viewpoints.

Before transferring over to the red bus we stopped off at the Information Centre. We knew that we wanted to go down into the Canyon the next day – just a taster, nothing serious, just to get a feel for it. Ange suggested and I readily agreed that we should know what we were in for so we headed to the Centre to find out what we needed to know.

They have a whole bunch of info-graphics and maps and such, and I’m idly wandering by and see the one categorizing the deaths of those in the Canyon. Apparently the people who die in the canyon are predominantly male (check), 40-50 (…ok) and die while tramping (hmmm…).

There is also a counter with a couple of park rangers there to answer questions, so we wander over to say hi. We tell them that we want a taster of the trail, maybe a mile or two in and then back. They explain that the lateral distance isn’t what gets you – it’s the elevation. One of the Rangers says that it takes twice as long to get up as it does to go down, so if it takes us an hour to get to the Lower Tunnel say, then it would take two hours to get back.

We look at the maps and elevation charts and say that the Lower Tunnel at a mile sounds good – and if we’re feeling good, we can keep going. The look of relief on the Ranger’s face is funny – I think that they must get a lot of people wanting to do more than what their abilities can support and that must be frustrating.

After all if someone asked me if I could walk 10 miles I would say yes. If they asked how long that would take I’d be inclined to say maybe 4 hours. And that would be fine, and accurate, on the flat.

The red route bus stops at every stop on the way west but only three stops on the way back, so it’s a good idea to know where you want to go and how to get there.

We wasted too much time going to the western-most end of the route before doubling back to other spots – my fault. The Hermit’s Rest stop is truly the most unscenic spot on the whole South Rim!

I thought being at the western end of the rim would be the place to be but was proven very wrong – the secret is to get to the promontories and watch the light playing on the Canyon walls as the sun sets.

There really are no words for describing the Canyon. Pictures try to capture it and fail. It’s an amazing… phenomena. There’s no other word for it – you can try using “vista” or something similar, but the hugeness, the vastness, the sheer enormity of it escapes description.

When we get back to the room, we get a phone call from our taxi driver saying that he’d managed to borrow his room mates car and that he could come and pick us up at 3pm the next day to take us to Page. I asked him how much he would charge us. He said he’d leave that up to me, that I was a good guy and would come up with a number that was fair. As long as he had something to cover gas as a minimum.

After a decent breakfast and packing a little backpack with a couple of bottles of water (dehydration was the single biggest cause of hiking death) and a few snacks, we headed out, getting to the head of the trail at 10 am.

Ten minutes into the trail I turned to Ange and raised my eyebrows. She knew what I meant. I’m used to a certain level of Health and Safety. A banister when there is some danger. Yellow tape warning of edges, that sort of thing.

This was a dusty, stony path, maybe a metre and a half (four to five feet) in width with a sheer, guaranteed death inducing drop on one side with no guardrail, warning tape or anything else preventing a plummet to your absolutely inevitable death. A slip on fine sand, gravel, a loose stone or a mistimed overtaking manoeuvre could have serious consequences.

The funniest part of that realisation was who we were sharing the trail with. A family blew past us, a mother and father with a baby in a back rack accompanied with four children, surefooted as goats.

Runners came up the trail, dressed in only shorts and shoes, making more speed than I could going down hill flat out, one so heavily tattooed I was convinced he was wearing a shirt until he came alongside me. Sooo fit.

We kept to the uphill side of the path and pulled over to let people pass us – we weren’t in any sort of rush and were taking in the splendour of the view, and enjoyed the workout. The trail was still in the shade as the sun wasn’t high enough to blast us just yet.

Before long we’d come to the Upper Tunnel, having come down a surprisingly steep bit of the path, but without the switchbacks which featured later.

Below us in the distance we could see where the path lead along a flat outcrop to Plateau Point. The path split well before that section and headed down to the right down a gully to the bottom of the Canyon and the Colorado River. I imagined that the view of the river would be spectacular from Plateau Point though.

About 10:45am we made it to the Lower Tunnel. There was a bit of a traffic jam of people so we waited a bit for the others to move on before taking some photos.

As we rested a Japanese lady with trekking poles, a floppy hat, face mask and sun glasses asked if I’d take a photo of her in the Tunnel. I smiled and said sure, though under all that protection it’d be hard to tell who it was! We chatted a bit – she had been on a three day hike from the North Rim to the South, camping at the river and doing some rafting. She must have been about our age and was moving incredibly well for someone who was nearing the end of a three day hike up and down such inclines!

It actually felt better going uphill. Harder on the legs, but I guess more familiar and therefore less dangerous. Or maybe too, that all the other uphill traffic had been going for longer and were more tired than us so we were passing more people? For whatever reason, we saw a lot more wildlife on the way up.

About 12:00pm we arrived at the top, more or less about right for a 40-45 minute descent. We felt really good – our legs weren’t too sore, we’d had a good work out and felt like we’d accomplished something.

I was talking to my brother much later. He and his wife had freedom camped in the forest near the head of the trail, headed down to the bottom campsite starting before dawn, slept on a single mat under the stars and then headed back, again starting well before dawn. I shuddered to think of the possible missteps, but I guessed if the moon was out that would have been enough light. Fitter and younger! Good on them!

We weren’t going to be picked up until 3pm, so had plenty of time to kill. We decided to walk along the rim for a bit and see the view overlooking the trail we’d just done.

A wedding party were getting their photos done overlooking the Canyon – talk about a destination wedding! One of the other passengers in the shuttle from Flagstaff had talked about coming to the Canyon for a wedding, so we figured it must have been this one. We couldn’t see her in the wedding party so she must have just been a guest.

Down below we could see just how overlooked by the rim trail we were when we were down on the Bright Angel Trail. And I could see what the signs meant that we’d seen which had said “Throwing Rocks Kill Trampers”.

And that was the Grand Canyon. We made our way back to a bus stop and got the red route bus back to the transfer point, transferred to the blue route, got back to the hotel and waited for our pickup. And then we were on our way to Page! 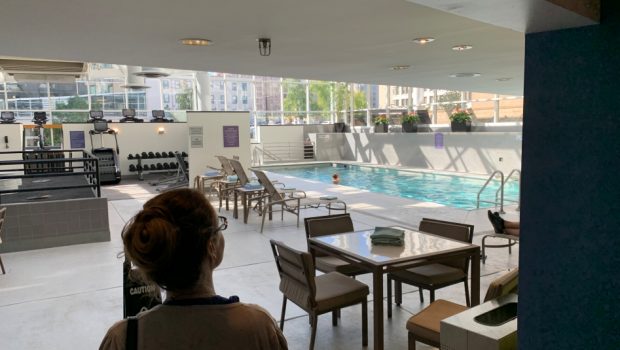 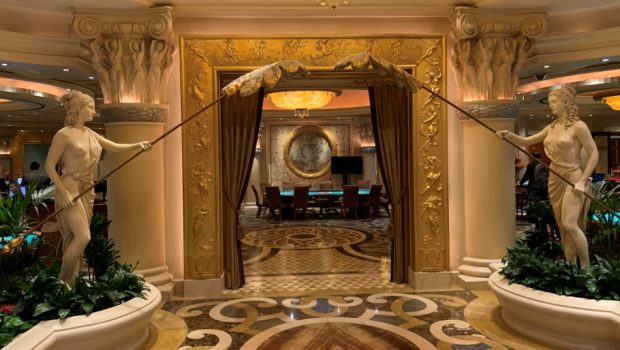