We arrived in Shanghai and grabbed the high speed train, the Maglev, into the city proper. Our flight had arrived from Xi’an on time at 4:35 and by 5:22 we were hitting speeds of over 300 kph (186 mph). Apparently they didn’t reach top gear as they regularly hit 431 kph (267 mph) and have the potential to hit 501 kph (311 mph). Shanghai’s public transport system is extensive – growing from zero in 1995 to being the longest in the world in 2010, and looking to double that length before 2020. 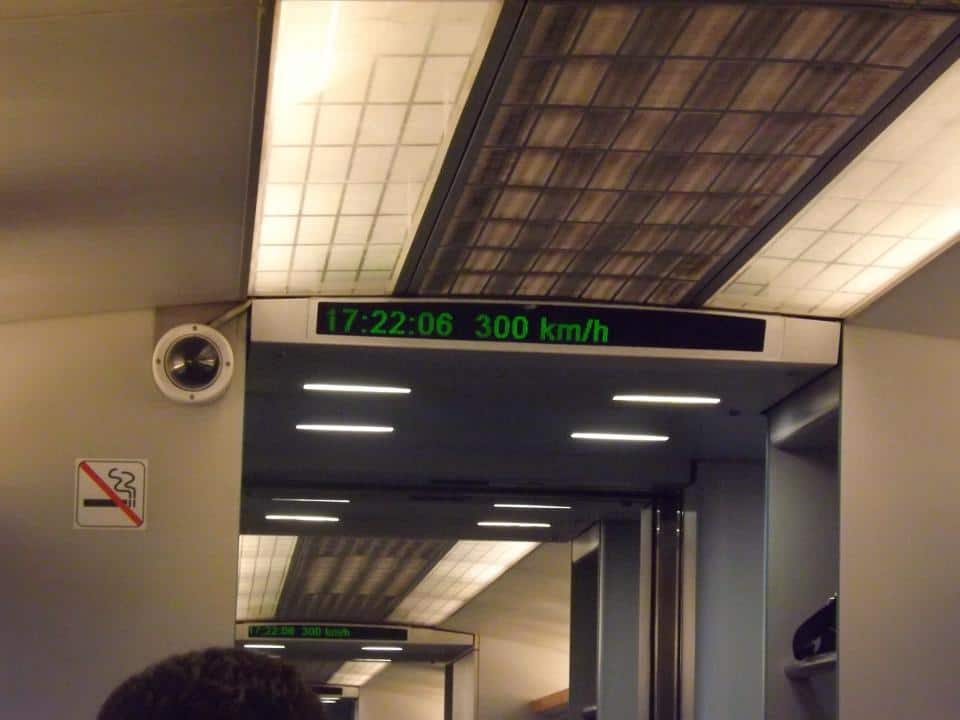 I’m staying using points at the Four Points Pudong and very quickly raise a smile at the layout of the room. The shower is a glass-walled enclosure separating the bathroom from the bedroom. A screen can be lowered if you’d like to do your business in private but the openness of the layout tickles me. 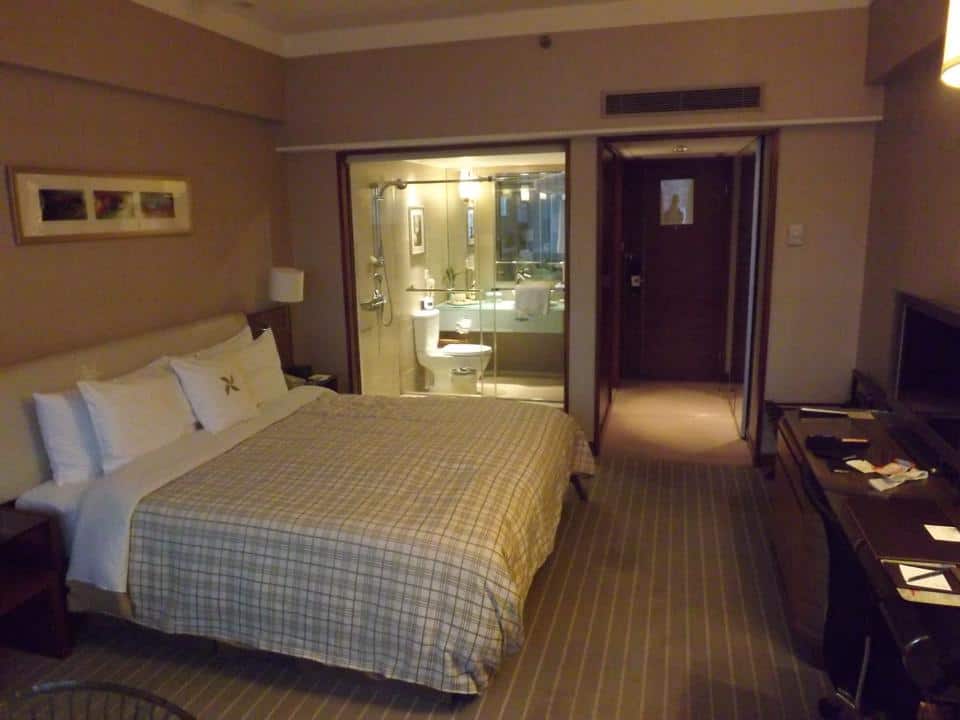 In the interests of making the most of the time we have available, we head straight out to the waterfront, starting on the Eastern side at Lujiazui0. The place is buzzing and you can see why – an impressive city-scape of neon-lit skyscrapers across the river in the Bund make a great backdrop for photo opportunities.

It’s a wonderfully romantic location for the couples in the crowd – a great spot to hold hands and gaze into the hazy night air – the recent rains and low cloud reflect the lights wonderfully, a bit wasted on me and Ben though.

We’d heard that there was a train which would run under the river from one side to the other and so we hunted it down. The entrance wasn’t the easiest to find, but we managed to locate it and then… well I guess it’s best described as a WTF? moment.

Please enjoy this video by another traveller: 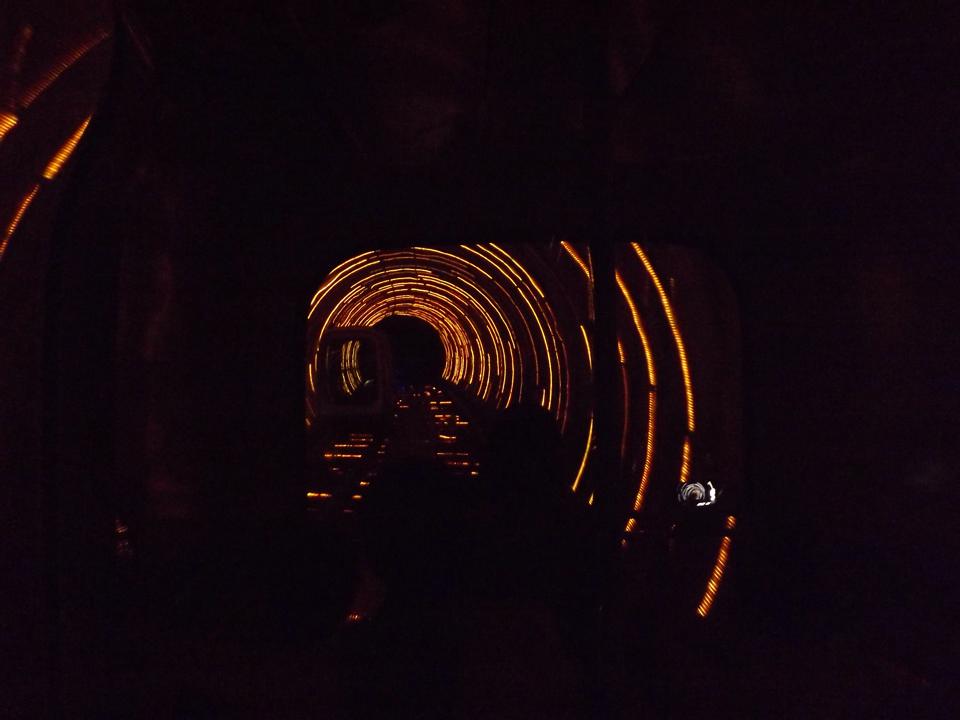 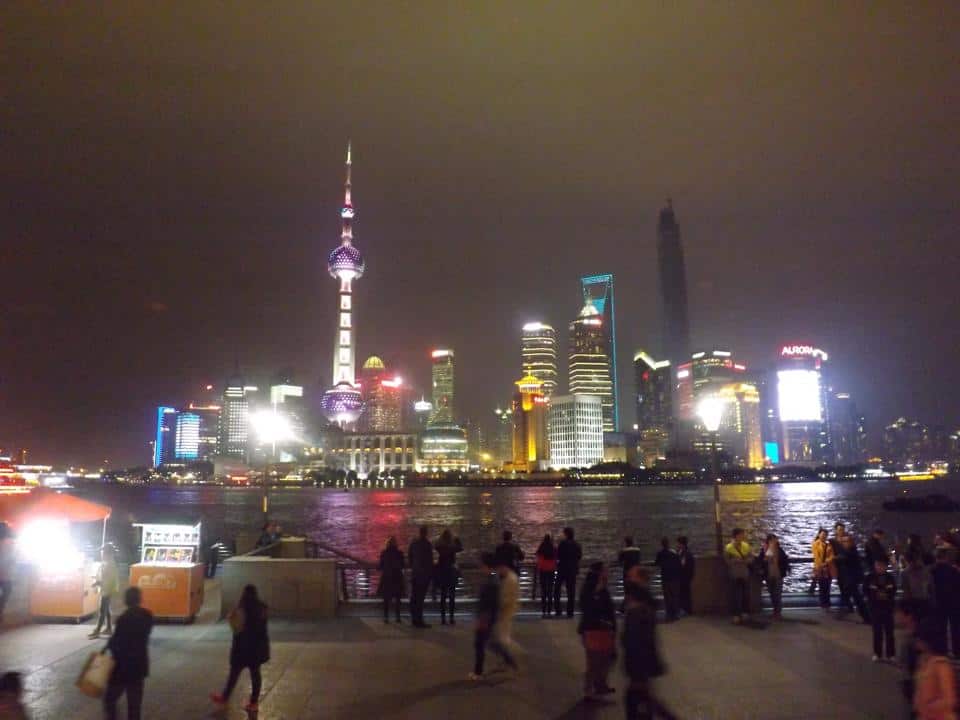 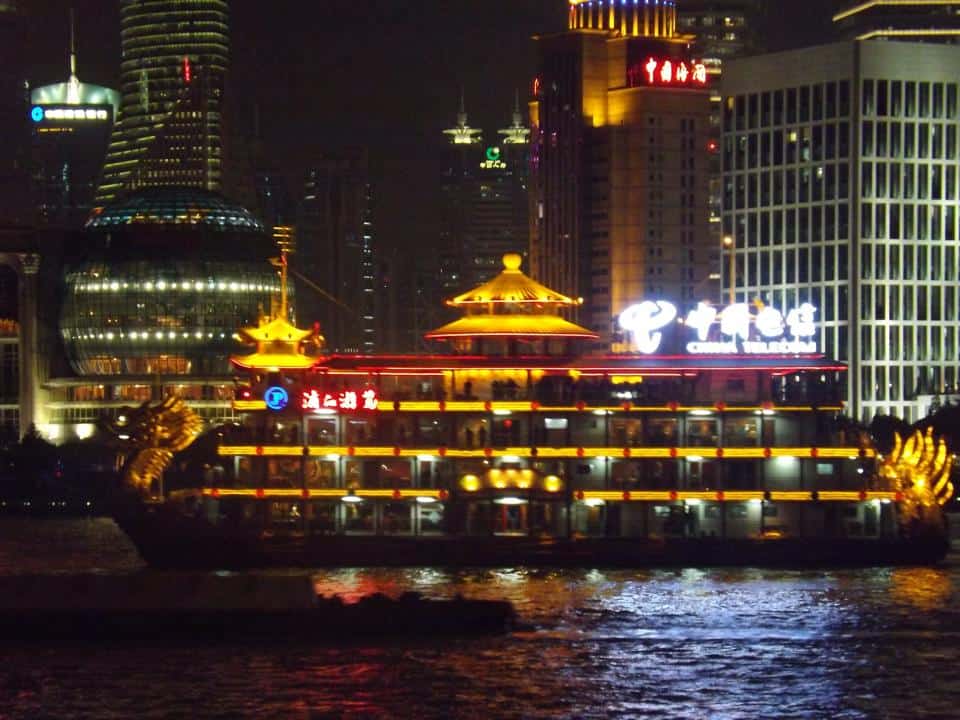 On the western bank we’re in The Bund – the area where the Western powers dominated Chinese life back in the early parts of last century. The views back to where we had just been are no less impressive and we grab a beer at one of the many river side bars and watch the ships heading up and down the river. They’re amazingly low in the water and we guess that these aren’t the ocean-going transporters but are shuttling goods from the cities further inland on the Yangtze River. 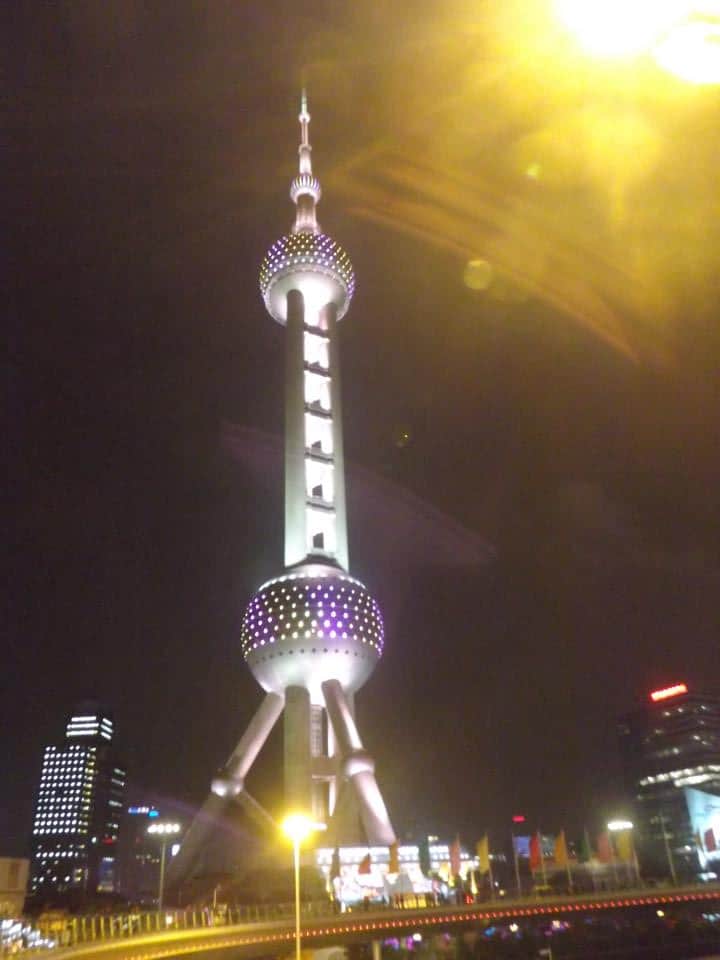 I had heard that there was a museum commemorating the atrocities performed by the Japanese during the pre-World War 2 conflict with China and thought it justified a day trip to Nanjing. I hadn’t drawn the connection between Beijing and Nanjing, but I found out that while Beijing meant Northern Capital, Nanjing was the Southern Capital. The city was called Nanking in 1937.

After taking a 2 hour train trip, we leave the train station and try to find the entrance to the metro. We look and we look and while we see crowds of people, taxis and the odd bus we can’t see any likely looking entrance to a Metro station. I eventually ask someone and while they don’t speak English, it’s wonderful what a smile and imaginative mime will do for communication. The metro entrance is not actually at the railway station but is only a little walk away. Not in the direction I was going to head off in, so I was happy that I asked. We manage to find our way to the Museum without any other mishap. 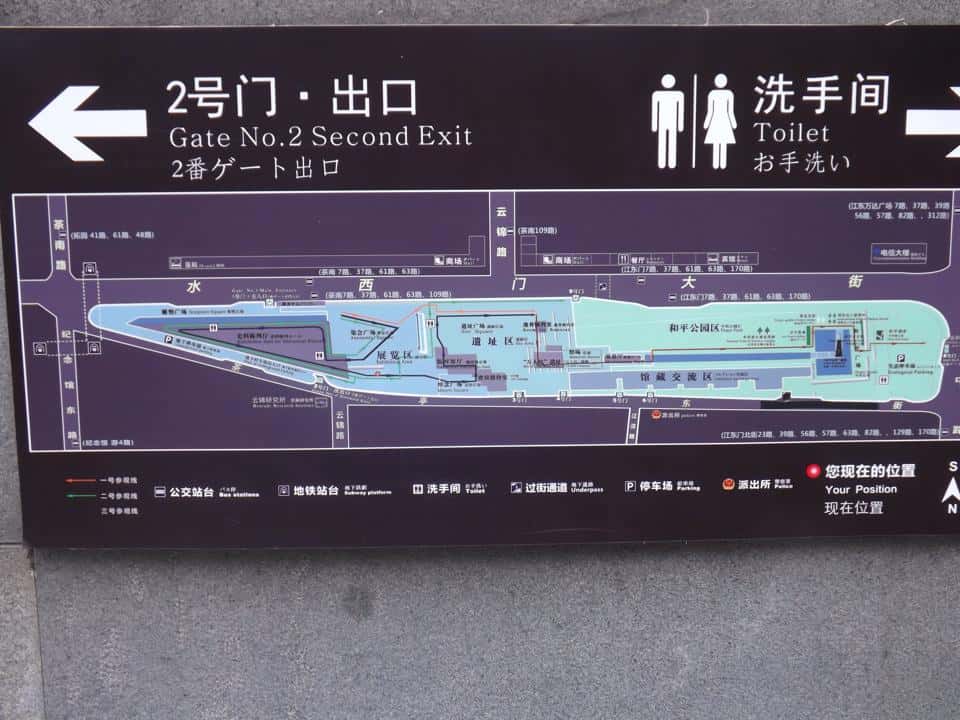 The Museum is set up in a proscribed route, which I guess is to avoid bottle necks from forming and impeding progress. The rainy weather matches the sombre mood of the exhibits and art installations and I learn a lot about the events around that time. It’s still, even after 80 years, a contentious issue between the Japanese and Chinese governments, and there’s a lot to think about on the way back. 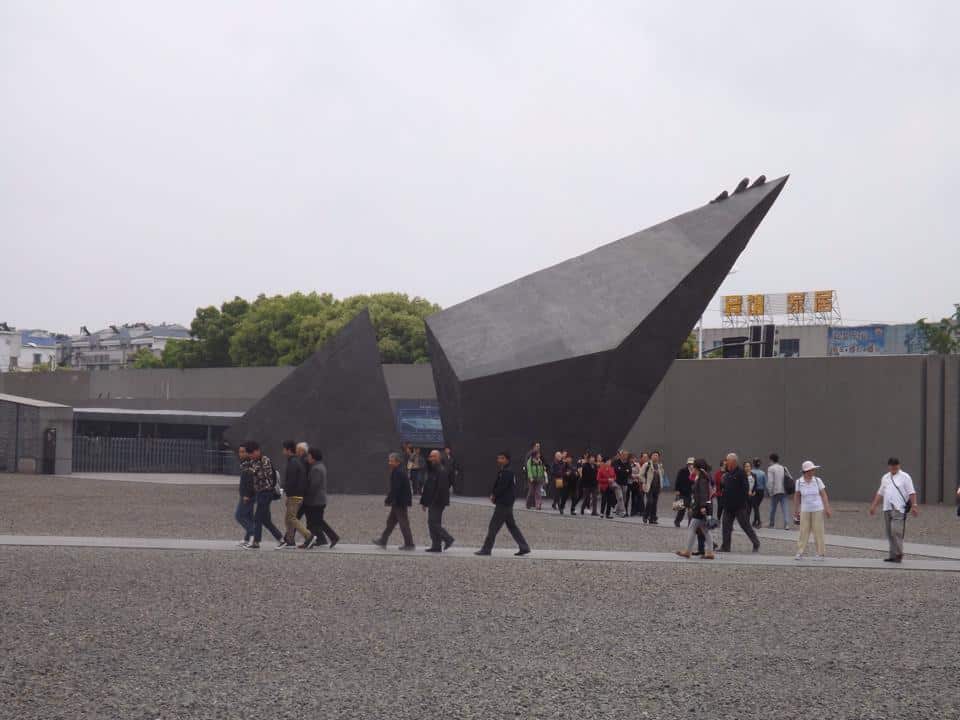 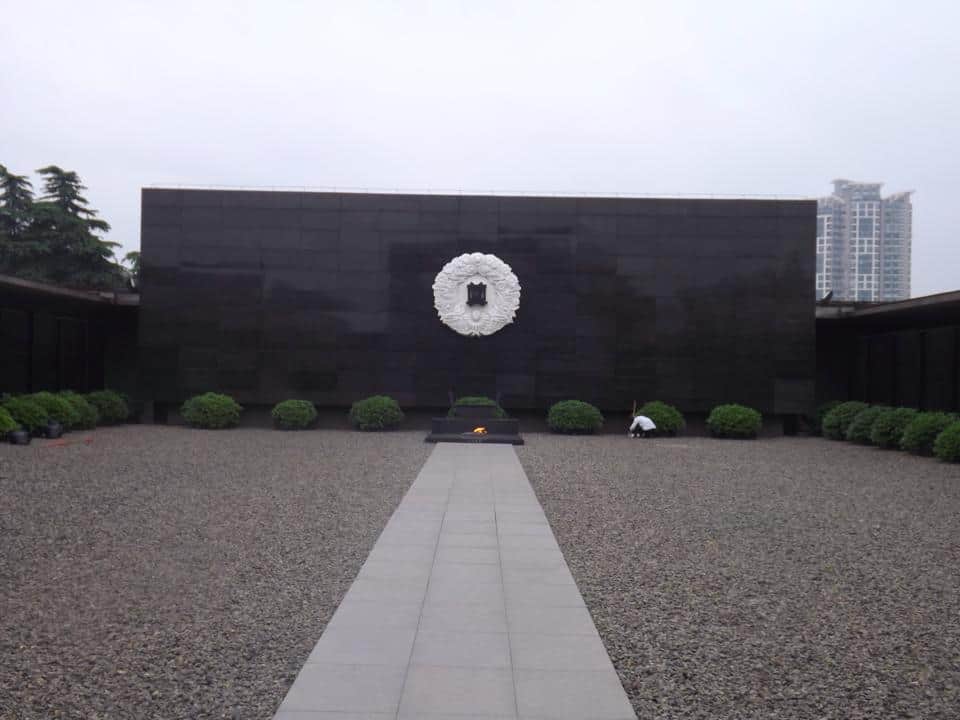 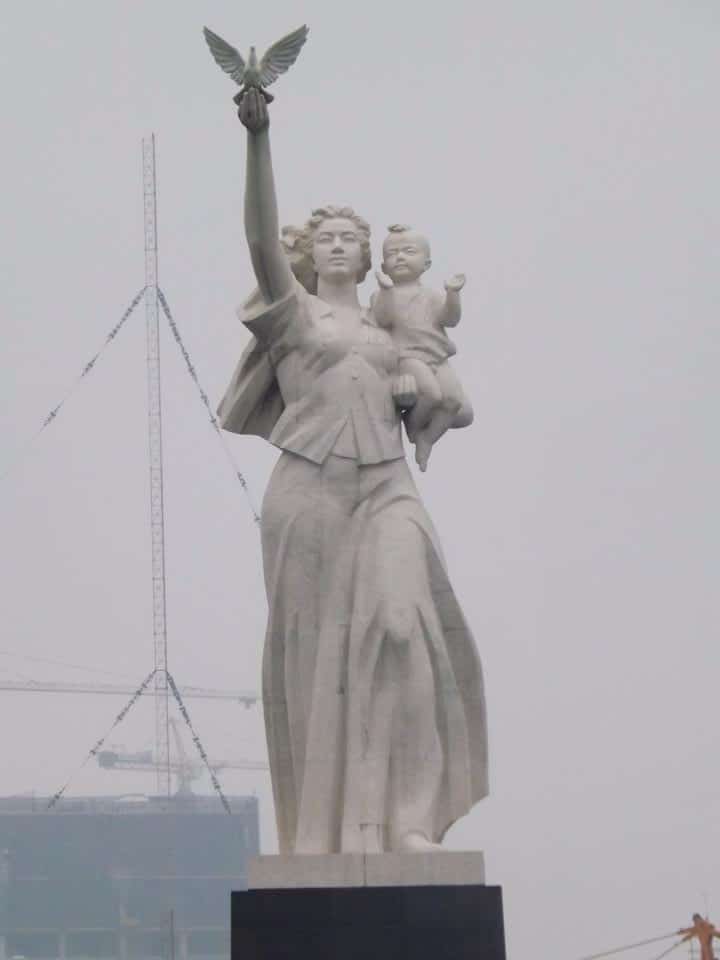 I think about the experience on the way back and feel unfulfilled. As usual I try to figure out why – the Museum itself was well laid out, informative with grisly-at-times exhibits, so it’s nothing to do with that.

Eventually I figure it out – it took about two and a half hours each way to spend ninety minutes at the Museum. So it just didn’t feel like the Museum justified the trip out by itself. I guess if we had tried to see more of Nanjing, or had something else to pin the day trip on it would have felt like a better use of our time.

The fact that I had pushed the destination as well made me feel bad – not quite a wasted day, but definitely not as rewarding an experience-wise as some of the other days. It got worse when I discovered there was a Sheraton in Nanjing (I was staying at Sheratons using points) – so we could have flown to Nanjing from Xian, stayed overnight, gone to the Museum in the morning and then headed to Shanghai straight away afterwards. 20/20 hindsight I guess…

If we’d been spoilt in the north with blue skies after the smog had burnt off, the south balanced that out with a pretty constant drizzle. It wasn’t too unpleasant and we figured it kept the crowds at bay, so I think we came out ahead. After being disappointed with our trip to Nanjing, I left Ben to decide where we went. He wanted to get a souvenir or two and elected for a trip to the arts and crafts neighbourhood of Tianzifang in the French Concession. 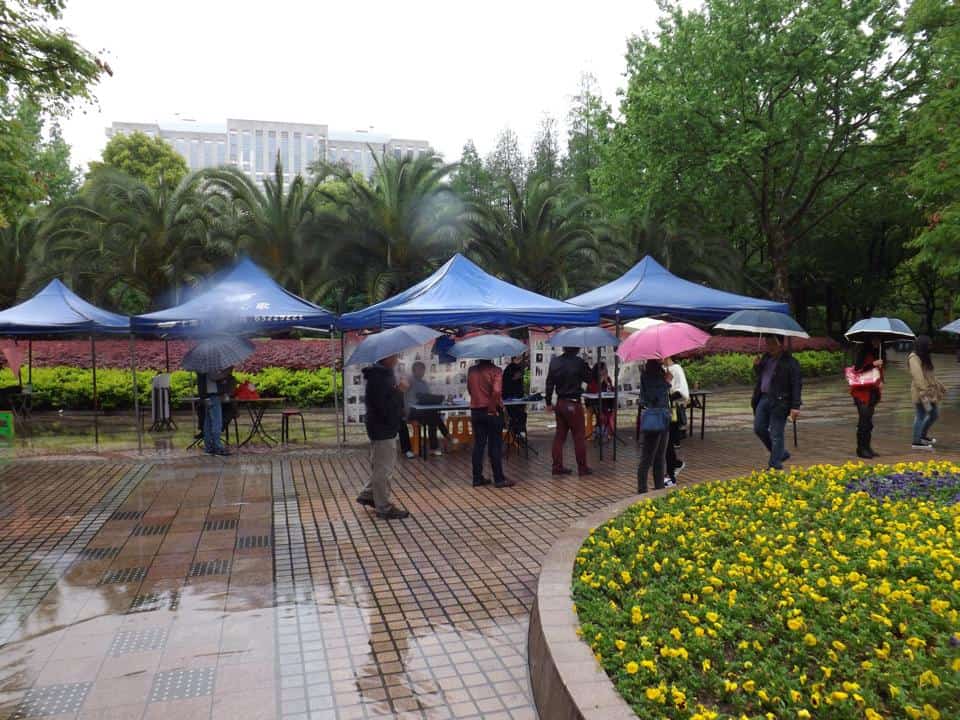 On the way to the markets we came across a very interesting set of marquees in the park. At first I thought that these were missing children but all the photos were of adults – male and female. The people sitting under the awning made it clear that photos weren’t allowed and then Ben put one and one together. “They’re match-makers” he said. And then it made sense.

Instead of going on Tinder, you could sign up for “Tent in a Park” and have your details put on a poster under an awning. I guess it’s just the form that changes – people have been match-making for others since biblical times – whether as a formal vocation or just because our of busybodyness! The park has a few interesting sculptures in it and my favourite is the “tennis balls in white tights” one. And then we are in Tianzifang. We grab a bite to eat at a fish restaurant before heading in to the arts and crafts for shopping. The restaurant has a large fish tank near the entrance full of fish and after our meal I notice a doorway on the way out and slip into an amazing room full of tanks with a huge variety of living fish and shellfish.

Some of them have a constant stream of moving water so the fish are constantly swimming in one direction, and there are a few nets lying around, so you can catch your own I guess. It’s certainly one way of ensuring that your produce doesn’t go off! 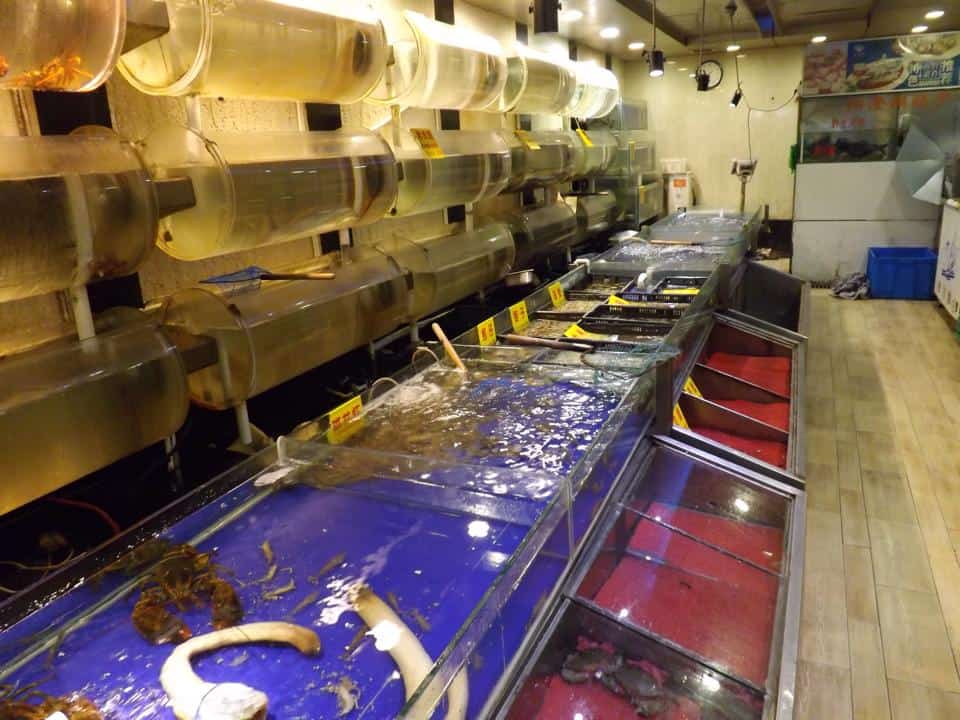 We wander around the markets for a while – Ben knows that shopping isn’t my thing so frequently makes sure I’m not getting grumpy or bored, but truth be told, there’s enough interesting things to gawp at that I really don’t mind.

We end up looking in a tea shop and a lovely young shop keeper offers to take us upstairs for a tea ceremony. When we go up the narrow stairs to the upper floor, another shop keeper is just finishing their ceremony, so we mill around and examine some of the gold-inlaid tea sets attractively presented in packing boxes.

Before too long we’re sat at the table being introduced to a number of different flavoured teas and learning about the relative merits of the different strains. Ben is quite taken with a set consisting of a pot and three cups and adds a few jars of his favourite blend as well. 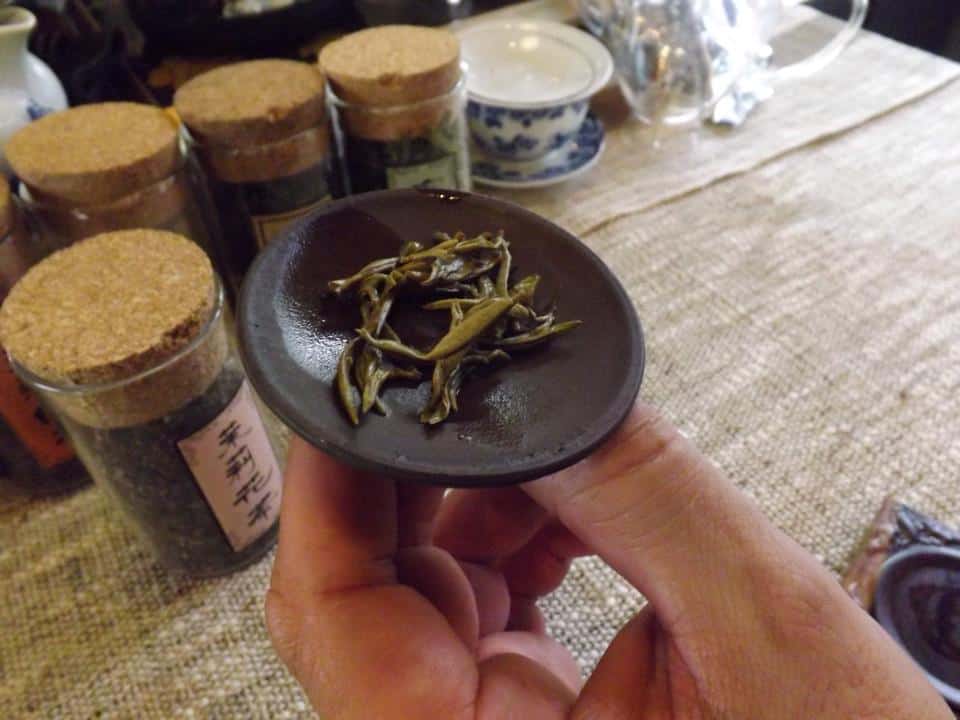 Suitably happy with his purchase we head back to the hotel. On the way back I ask for a crash course in negotiation – Ben is a bit of a pro with negotiations and I thought he did pretty well at the tea shop. He says when you’re negotiating, always look them in the eye. When you make your offer you want to see some pain in there –  that shows that you’re getting a good deal. I squirrel that snippet of information away ready for the Indian leg of my trip.

The next day we head to the airport – for Ben this is the end of the road and he heads back to London. For me, it’s the halfway point and I head to Rajastan in the North of India for a week. 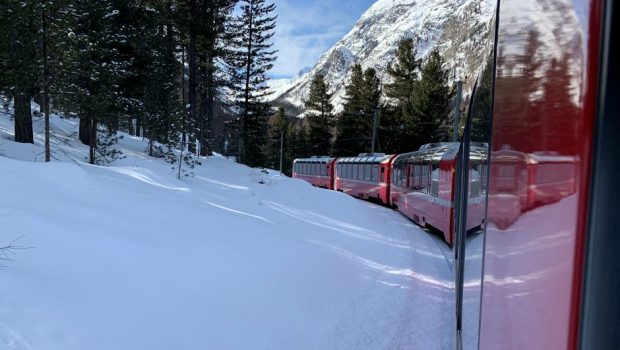