I used to work on Queen Street in Auckland and, in the last block before Commerce Street, tucked down a corridor barely visible from the street, was a chandelier.

Periodically on the way to or from work, I would glance down there and see a doorman and wonder what shop or apartment in Auckland needed a doorman.

Turns out that was the entrance to the Grand Windsor, a 5-star luxury hotel in Auckland CBD, and fast forward a few years, me and Ange stayed there as part of our Auckland Luxury Hotels series.

The corridor to the hotel proper lets you know you’re going somewhere special. The distance from street level insulates the interior from the street noise and when you ascend the few steps to the entrance area, you’re surprised by the casualness of the check-in process.

Instead of a front desk, there are a number of desks with computers where you sit while the staff member checks you in. The desks are at one end of an extended lounge with suitably posh couches, and a welcome beverage takes no time to be offered and accepted.

Check-in is swift and painless and then we head back out to the chandelier foyer where the lifts are. While you could take the stairs we elect to take the lift up to our room and pause briefly to admire the stylishly laid out chairs on the landing – trés elegant!

The rooms of the hotel are laid out on either side of a single long corridor which winds its way through the building. The building was built in 1928 but the multi-million dollar room by room renovation was carried out in 2017 – keeping the Art Deco design touches and reinvigorating the decor with opulent touches harking back to its previous glory.

The story behind the decor decisions was laid out on a page in the booklet in the room, referring to the gems bought by Edward VIII for Wallis Simpson, but apart from sharing the name Windsor, I found the linkage a little tenuous.

Nevermind – the interior design was lovely and the colour scheme incredibly complementary. The lounge sported the usual amenities you’d expect to find in a luxury hotel: big screen TV, desk for getting some work done, mini bar goodies etc.

But the thing which really caught our eye was the striking colour of the tea pot and cup and saucer set. Perfect to go with our welcome slice of cake!

The bedroom was an OK size and the bed enormous, but it kind of had to be with the number of pillows that sat on it!

It was dreamy sleeping on it – very difficult to get out of in the morning! Blackout blinds were an addition that made the room perfect for sleep, but for me the room shone because of the bathroom.

The Grand Windsor had really gone all out in the bathroom: a lovely white and gold colour scheme giving the impression of great space in a room which was already a really good size.

The toiletries were Floris of London and there were two sets: one by the sink and one in the shower. And oh! The shower – dual heads including a luxurious rain forest head which rained the water down almost like a scalp massage. Delightful!

We’d mentioned to the staff on the way back from dinner that we would like a sauna and they’d looked surprised, but rallied to the task. They let us know it might take 30 minutes for it to warm up and we watched a bit of TV in our room while we waited.

On the way down we went exploring and discovered the small gym with a few pieces of equipment (treadmill, pair of exercycles, some weights and a Swiss ball) and then headed down the stunning stairs to the sauna.

The sauna was small – just enough for the two of us, and needed a separate swipe card to access, so perfect for privacy. There was also a Jacuzzi which turned out to be a bit bigger than we expected, with an eerie blue light shining up from under the water.

No noise or scent got through the window but it was peculiar watching so clearly the shadow of the person smoking with the wafting clouds of smoke so clear. The light behind them must have been very bright for the details to be so clear in shadow. Ange had her back to the window and so when the two silhouettes had disappeared I mentioned it to Ange.

She turned to see where I was talking about and at that moment one of the smokers came back, looming even larger. The sudden appearance was quite startling and Ange yelped sending me into hysterics.

The next morning we went down for breakfast, which was served in the lounge area on the ground floor. Space was limited but they had pretty much everything you could have wanted, plus you could order anything made to order.

It took a little while for ours to arrive, but we busied ourselves with reading the complimentary newspapers and grazing on the continental offerings. It was certainly worth the wait – quite delicious!

Definitely! There was no noticeable street noise so even though you were staying right in the centre of town, it was a relaxing and enjoyably night’s sleep. 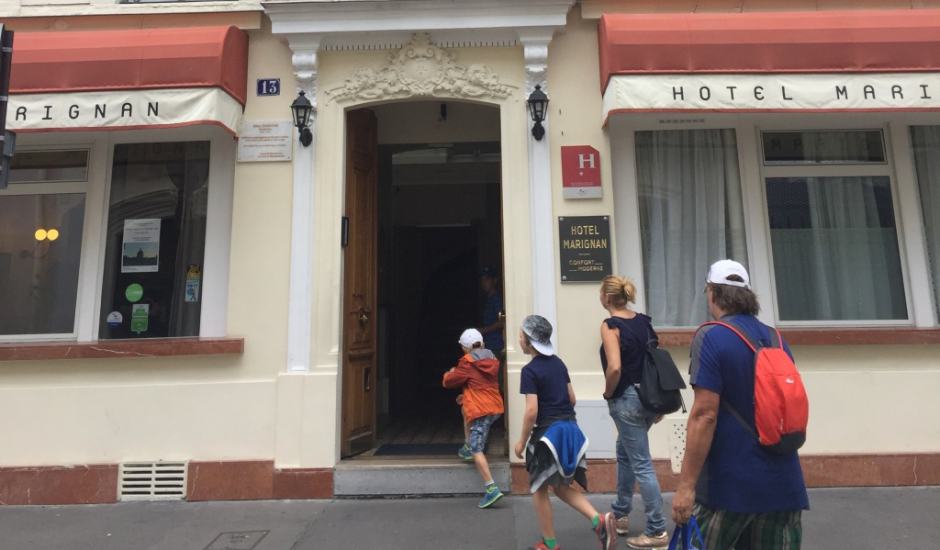 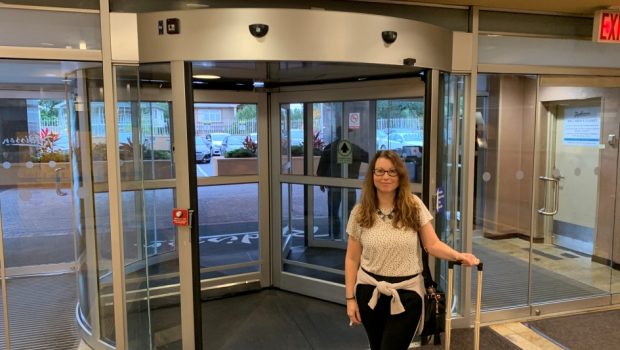