The Hotel Palisade is an eight room boutique hotel originally built in 1915 (when it was Sydney’s tallest building), perfectly located in Millers Point with views to the Sydney Harbour Bridge and across the water to Lavender Bay.

Rich in history, it was renovated in 2015 and features a pub on the ground level and a bar on the top two levels – the perfect spot for photos of the sunset and the Bridge when lit up at night. The location is great for those wanting to explore Sydney’s historical neighbourhood, being walking distance to The Rocks, Barangaroo Reserve and Circular Quay. 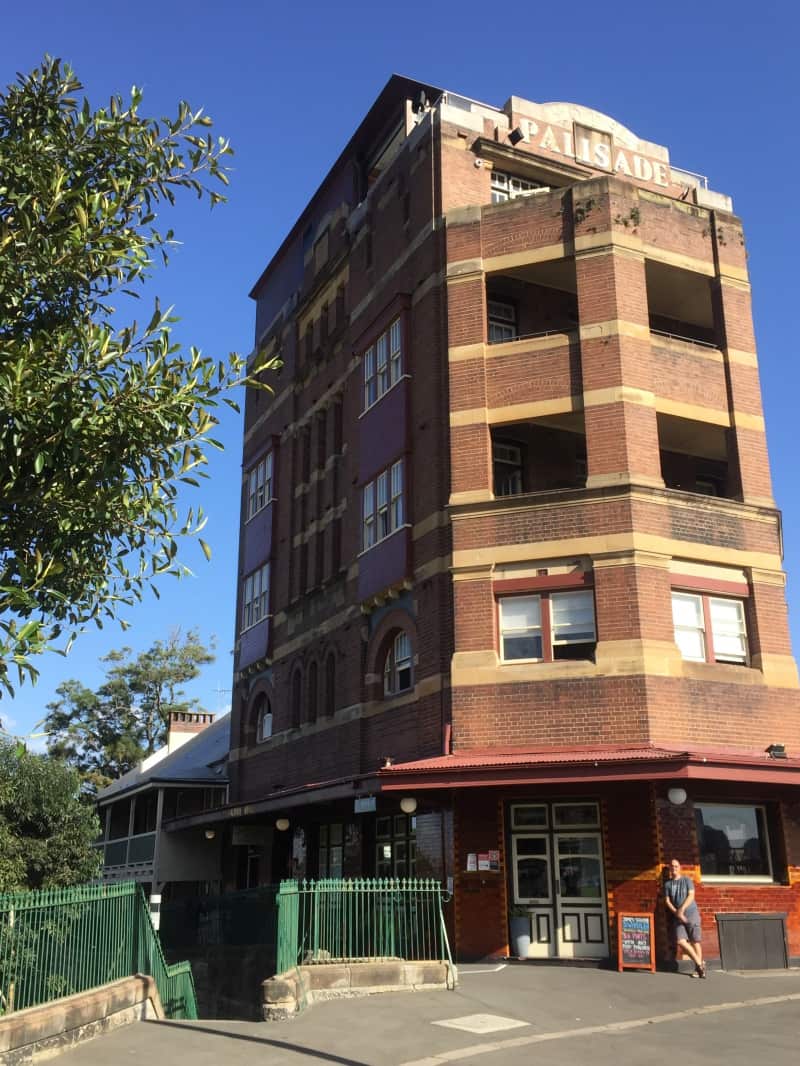 We’ve stayed in some lovely character hotels (25 Hours Berlin, 25 Hours Vienna, Hotel Otto, Artist Residence Brighton amongst others) and the Hotel Palisades can hold its own with all of them. We’re staying in the William Bennett room, which is named after one of the many ex-convicts who dragged themselves up by their bootstraps.

The room starts with an elegant bed, crowned by a mosquito net and contrasted with a mural of a surf beach. It turns out to be quite comfortable too. 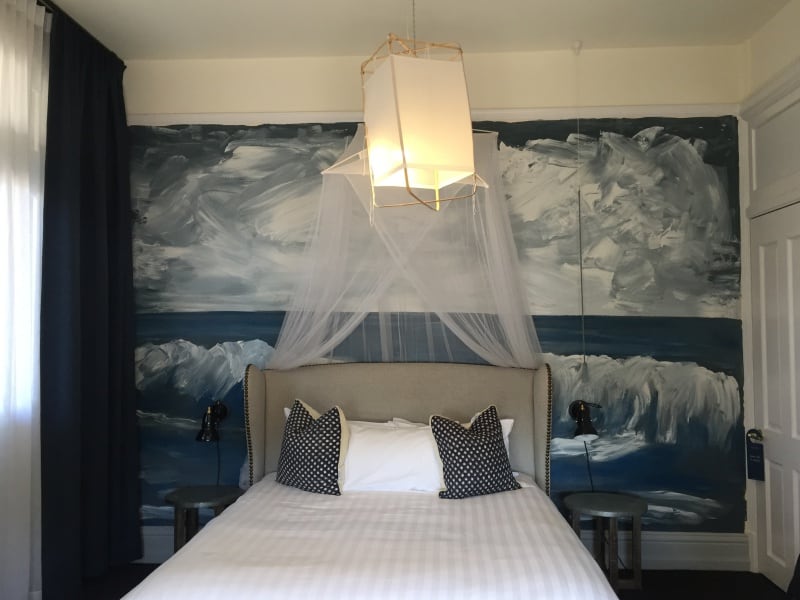 The other part of the room is a lounge with a door opening out on to a shared terrace. The views of the Harbour Bridge from the terrace are amazing. 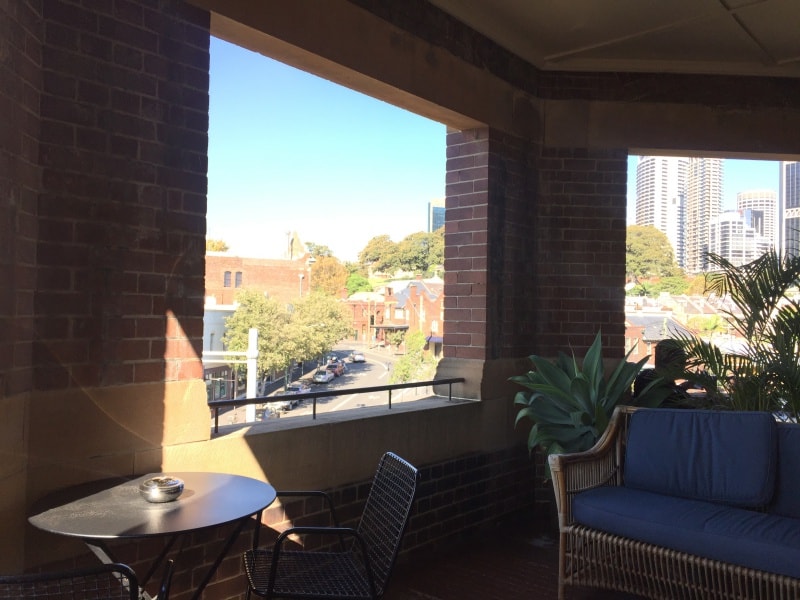 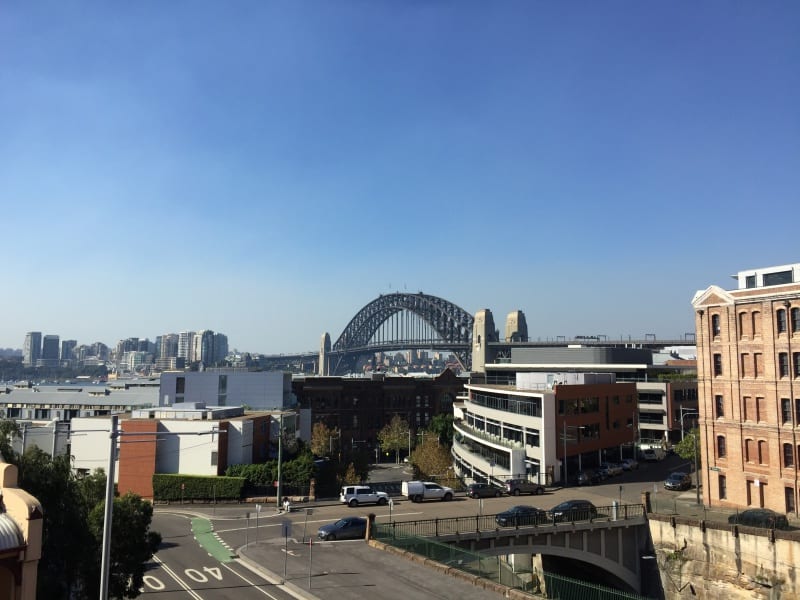 Couches and armchairs provide comfortable lounging while flicking through the compendium. Whoever wrote the book had a sense of humour as it identifies all the things you need to know about staying at the Palisades. They even include Netflix! 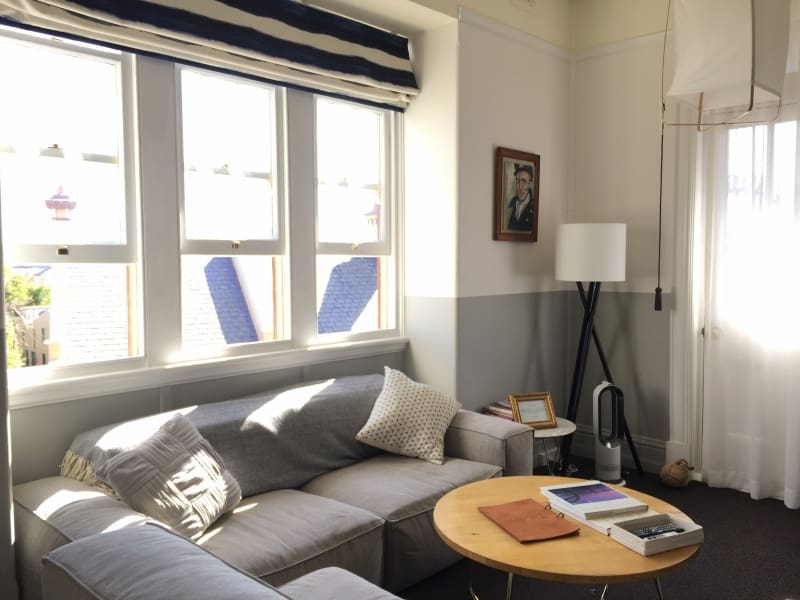 Because the building is a listed building, the owners weren’t able to install air con, instead there are ceiling fans and a bladeless fan and windows that open. Plenty of options to keep cool. 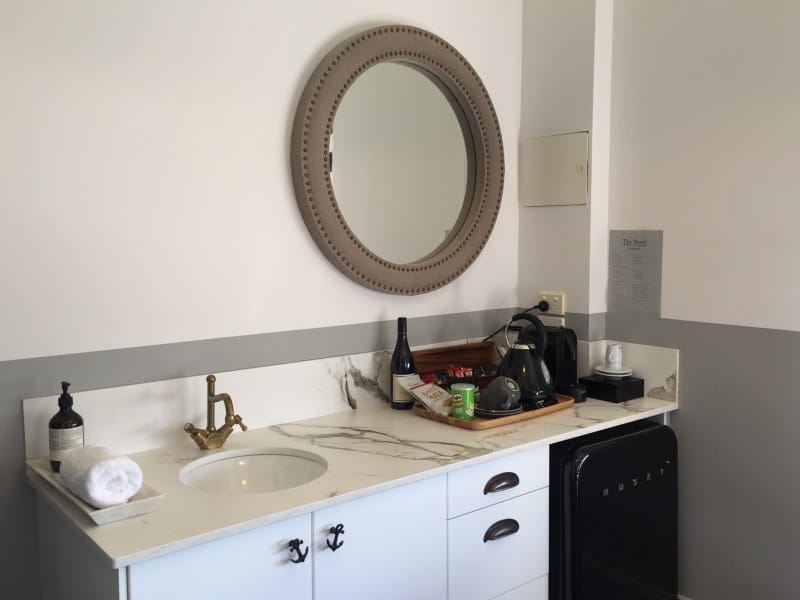 Against the back wall is the minibar and also a sink which means you don’t have to walk all the way through to the bathroom to fill the kettle for a cup of tea. A very slimming mirror sits beside the cabinet – it’s very flattering! 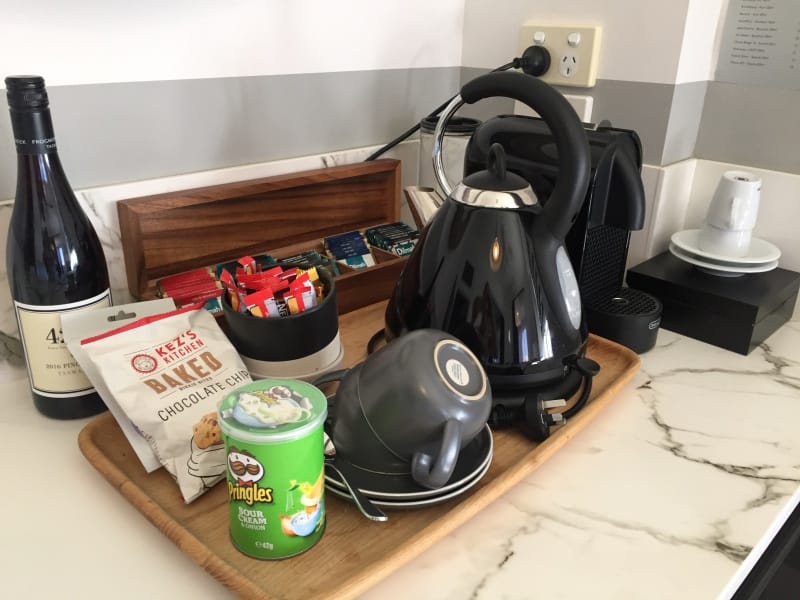 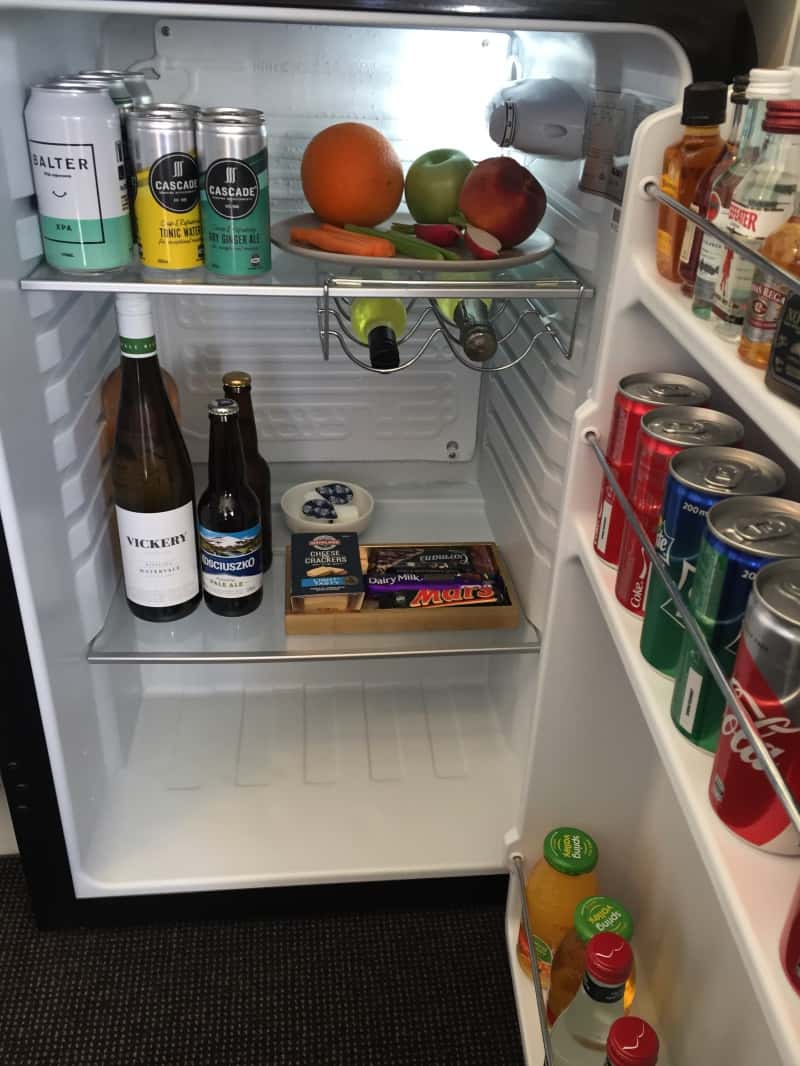 The floor in the bathroom is about two inches higher than the rest of the room but you learn after the first time you kick the tiles on entry not to do that again! The toiletries in the bathroom are Elemis, which is apparently a good brand, and in the sink in the lounge there is Aesop handwash which Ange assures me is even better. 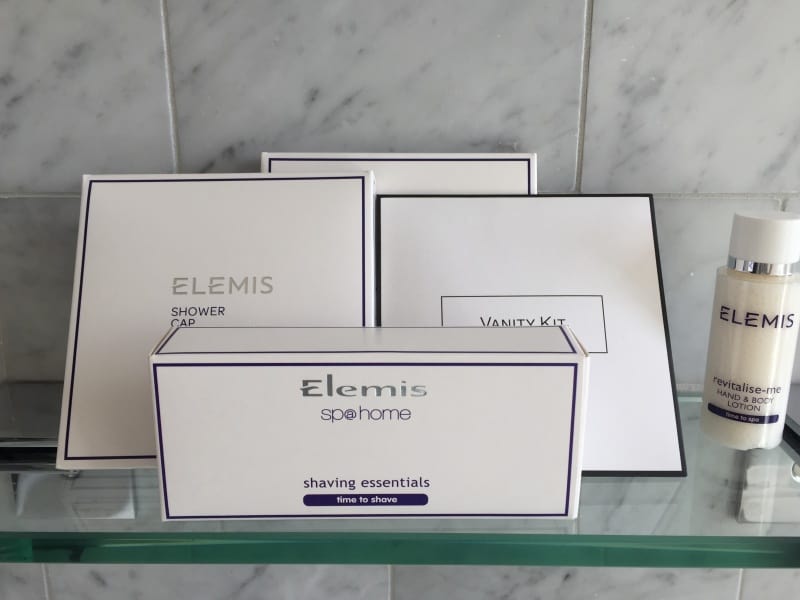 Back in the lounge there is a quirky mini-Marshall amp which turns out to be a bluetooth speaker that includes a cable to plug in to your phone or other device so you can fill your room with your own music. 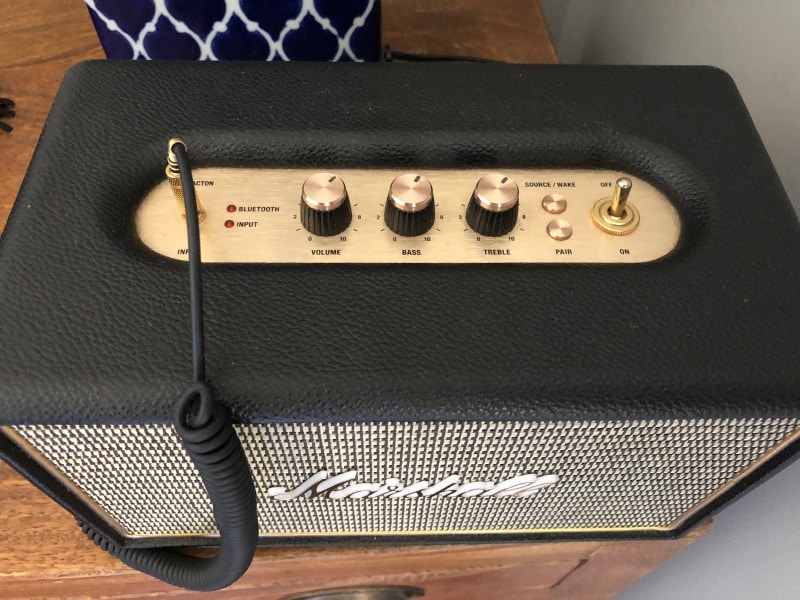 Just before sunset we headed upstairs to the Henry Deane which is the bar on the top two levels. There, impossibly thin waitresses and impeccably coiffed bartenders served the fashionable set of Sydney. 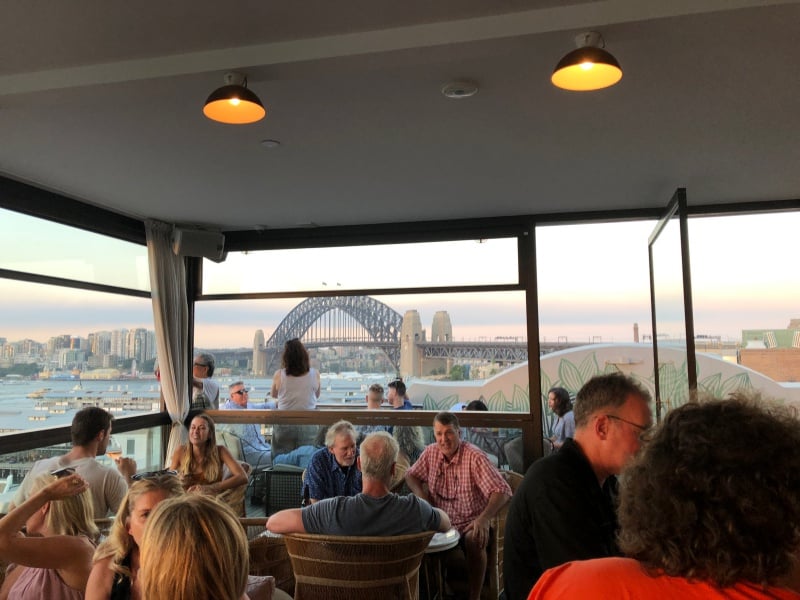 I wasn’t made to feel unwelcome, shod in sandals and wearing a t-shirt and shorts, and we enjoyed the delight of the sun going down over Darling Harbour and a little later the lights on the Harbour Bridge coming to life. 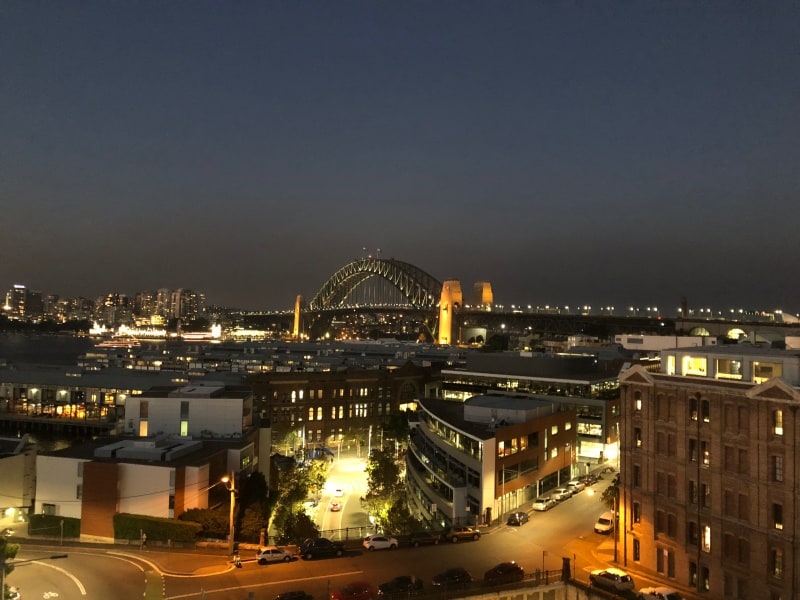 We’d been told on arrival that we were entitled to a free drink, but the waitress apologetically informed us that it was for the pub downstairs, not at Henry Deane. We ordered a $20 cocktail each instead and enjoyed the views and took in the scene.

It was mainly an upmarket clientele, though I was convinced someone had let in a bunch of egg laying chickens judging from the shrill squawks coming from one of the tables!

After our drinks we headed down to the pub for dinner. Ange had the beef salad and I had the lamb salad. The lighting was very dim down there, but after our food was delivered and we’d turned the torch app on our phone onto it, we could see that it was very well presented. It tasted divine.

Mine was like a deconstructed wrap with hummus, and the lamb was beautifully cooked and there was a lot of it – certainly good value for money! Ange enjoyed her salad too – plenty of meat there as well! 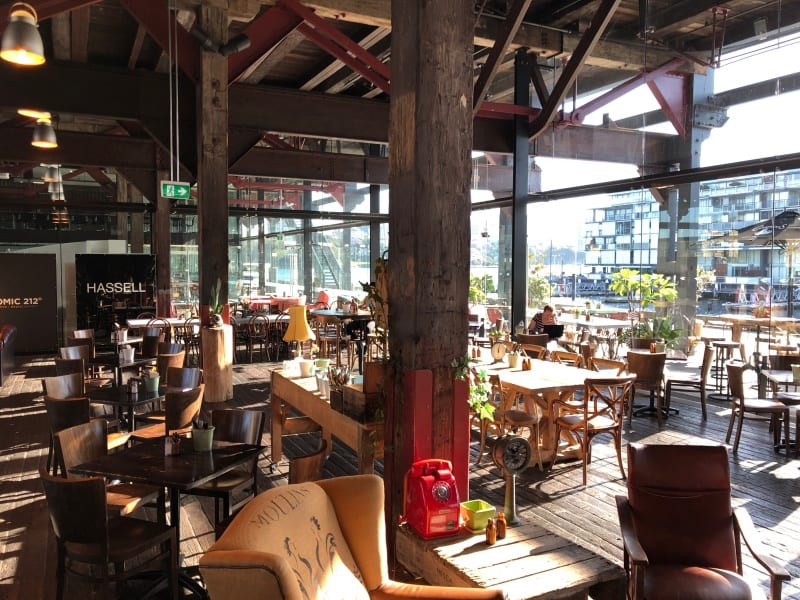 Having only eight rooms means that certain sacrifices have had to be made. There is no breakfast, though there are some very good cafes nearby. The Palisades used to have a deal with one of them, but they stopped that due to it not being good value for their customers.

Instead we wandered down to Pier 8 which was a huge space in an old pier which has now been converted into office space for some hi-tech companies. Somehow the go-go attitude of the internet customers hasn’t rubbed off on the staff at the cafe and we end up waiting quite some time for menus and then for the food.

When it does come though, it’s well worth the wait – my corn fritters were a divine combination of textures and tastes, wedged as they are between bacon and avocado and a poached egg. Ange enjoys her poached eggs with bacon as well. It’s a bit on the pricey side though: $50 for the two of us! I wouldn’t hesitate – the location is so handy to all the touristy attractions in Sydney, and yet there seems to be a bubble around the hotel so it feels peaceful and untouched by the bustle and hurry of the modern city. The room itself lends a home away from home vibe and basing yourself in such a welcoming environment is the best way to recuperate after a long day of sight seeing and activities.

The Hotel Palisade supported our Sydney trip by providing a complimentary stay. All opinions remain our own.