I have a lot of time for the Il Mondo. Situated on Kangaroo Point with the Brisbane river on three sides, this boutique hotel is as close to the centre of Brisbane as you can get without being surrounded by be-suited office workers. In fact Kangaroo Point manages to invoke more of the ambience of a sleepy seaside neighbourhood from one of Australia’s ubiquitous TV soaps than an inner city fringe suburb. If it wasn’t for the bridge connecting to the CBD that is.

We headed up to the room on arrival and we’re pleasantly surprised. The room was an apartment with a huge lounge with a full kitchenette. Including a dishwasher!! 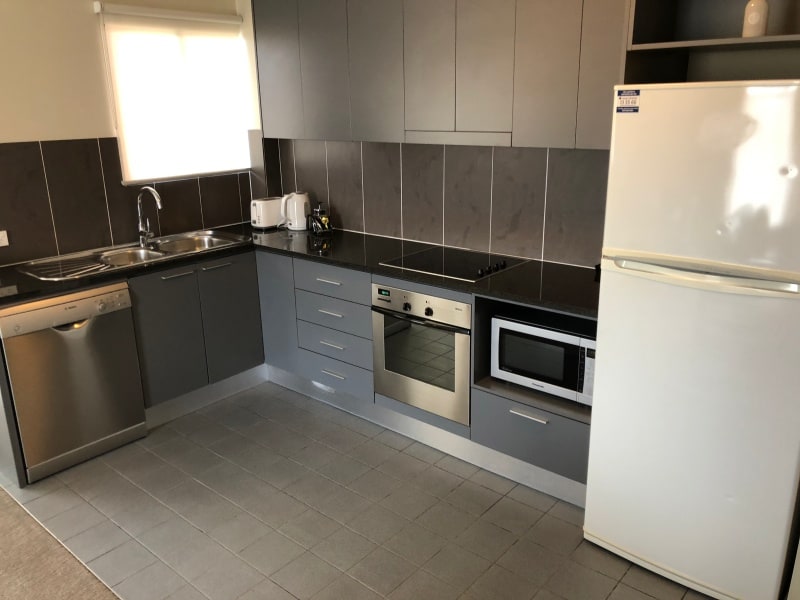 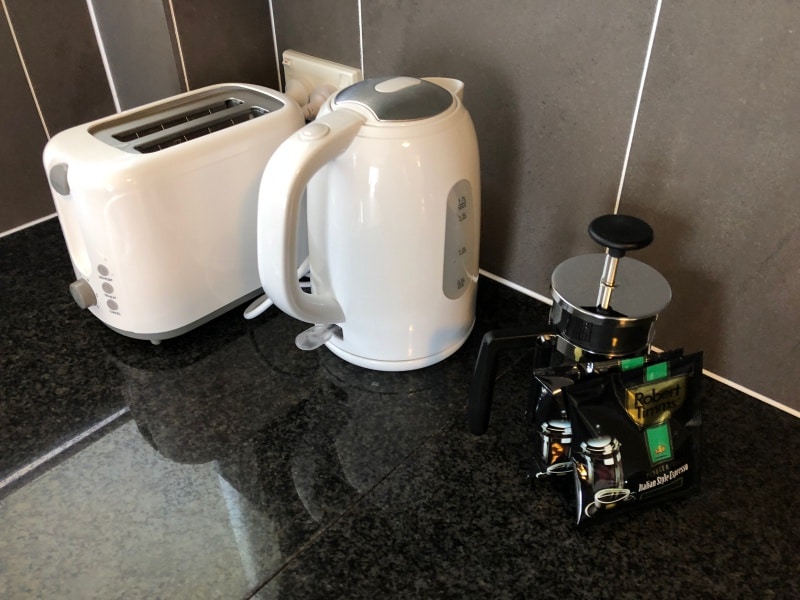 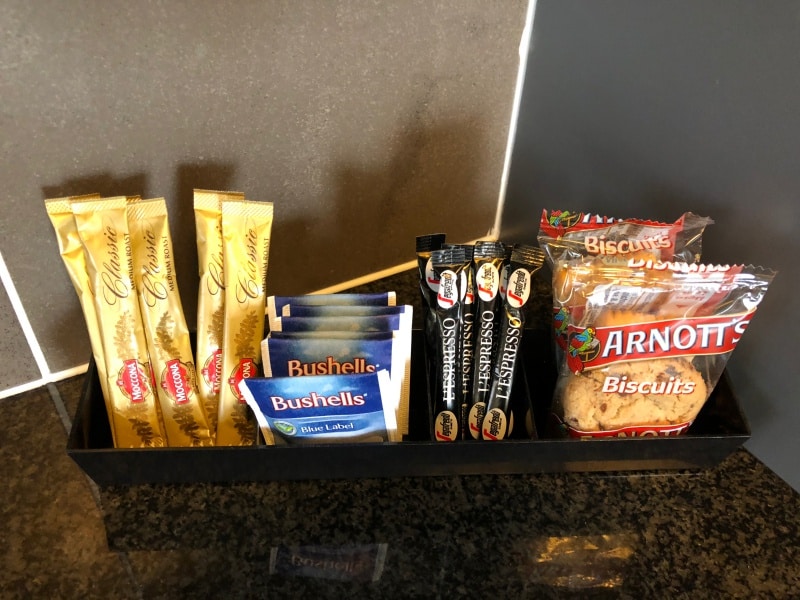 A couch and armchair faced the big screen TV over a stylish coffee table and a dining room table with four chairs sat in the corner, offering views out to the river, over not one but two balconies. 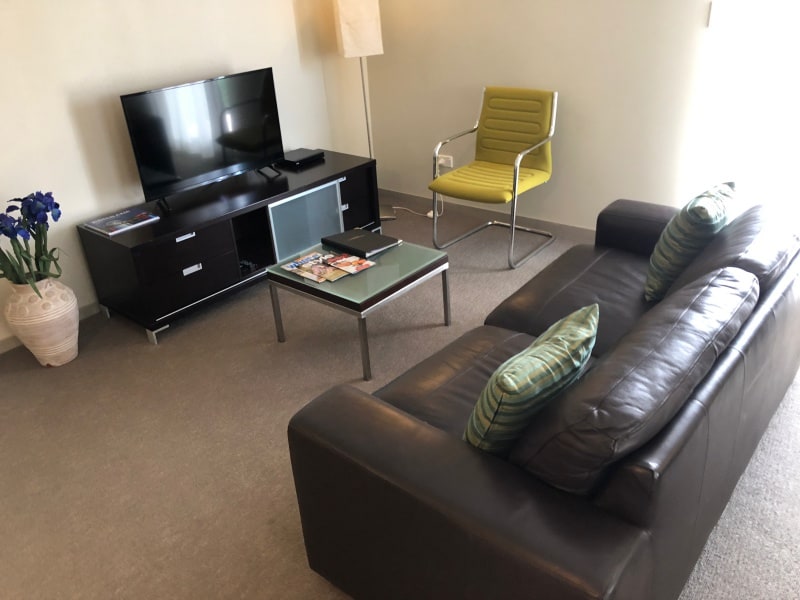 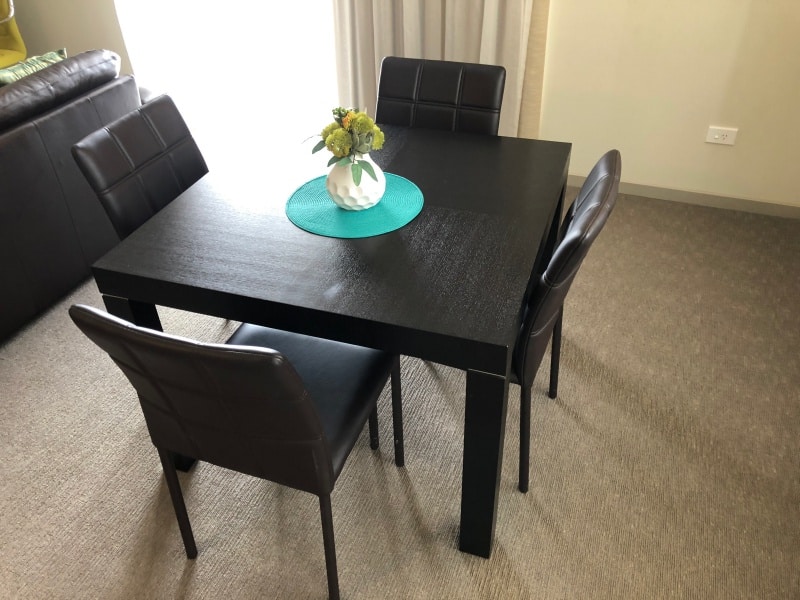 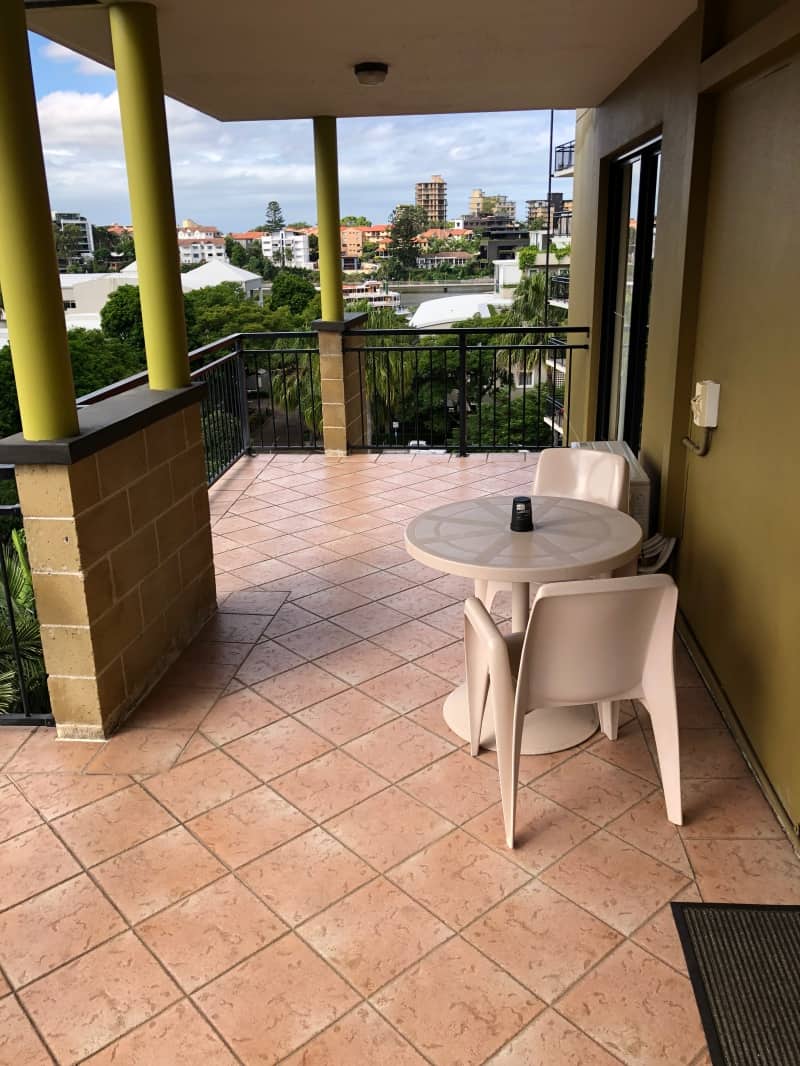 The bedroom was all style. A second door to the balcony offered indoor/outdoor flow, while the bed itself was enormous and stylishly laid out with a bazillion pillows. Both lounge and bedroom had independent air con which came in handy: we had the lounge air con on at night which allowed near silent coolness to reign in the bedroom. 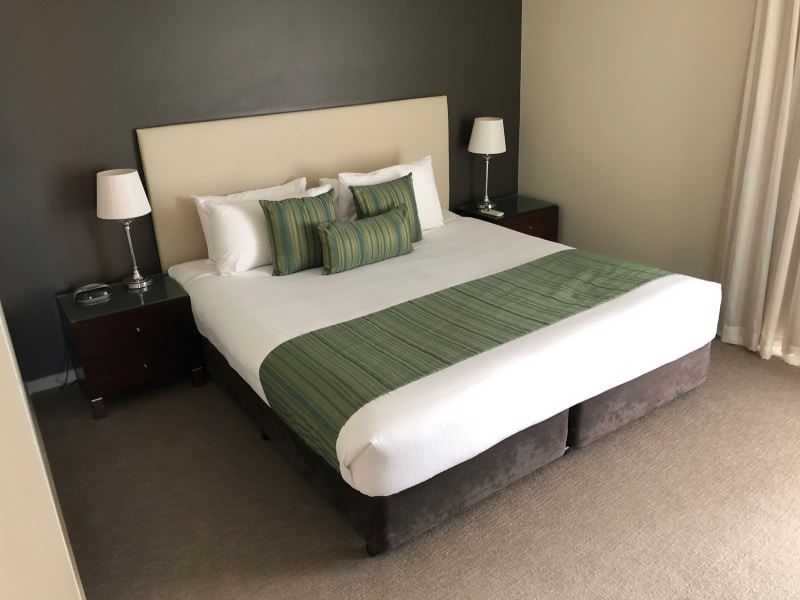 The bathroom was nice. A roomy shower with well powered shower and Natural Earth toiletries from NZ. 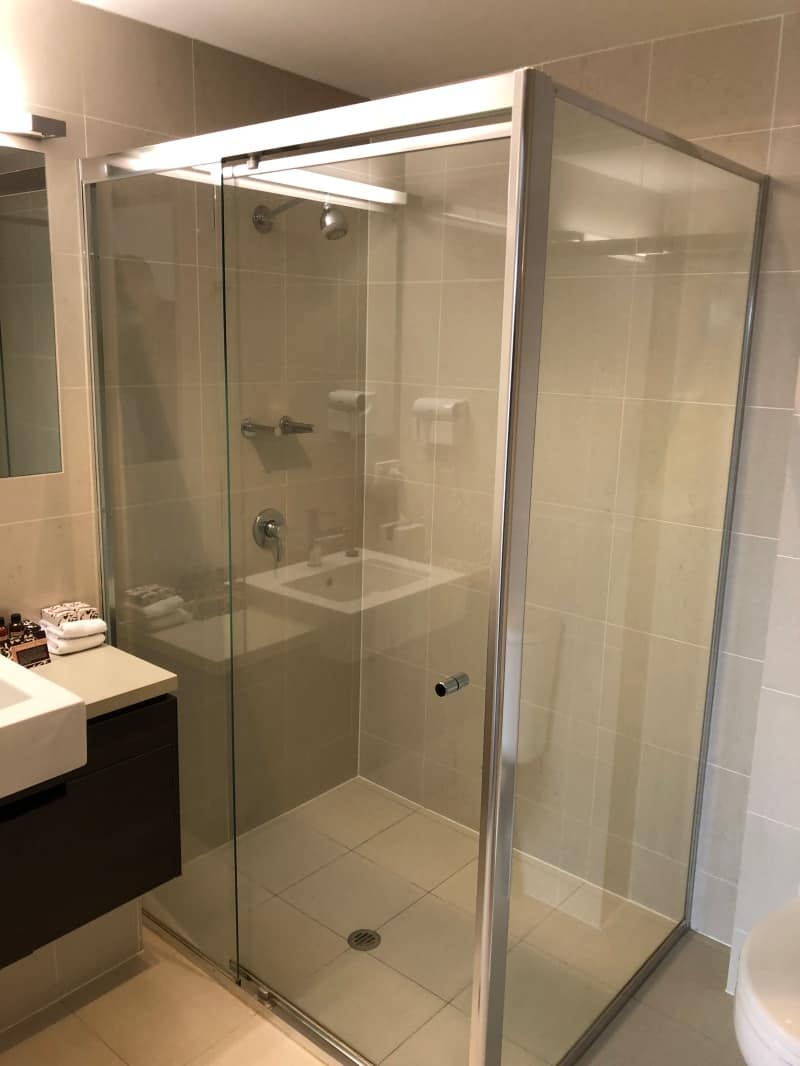 We headed out to explore the neighbourhood and find somewhere to eat. The Compendium in the room had listed the nearby restaurants and eateries and there were a fair few to choose from. We passed the local sports bar and gave it a miss. While it was a lively and energetic atmosphere we decided we were after a more laid back and conversation conducive spot. We found that at the St James Crabshack, not five minutes walk from the hotel. 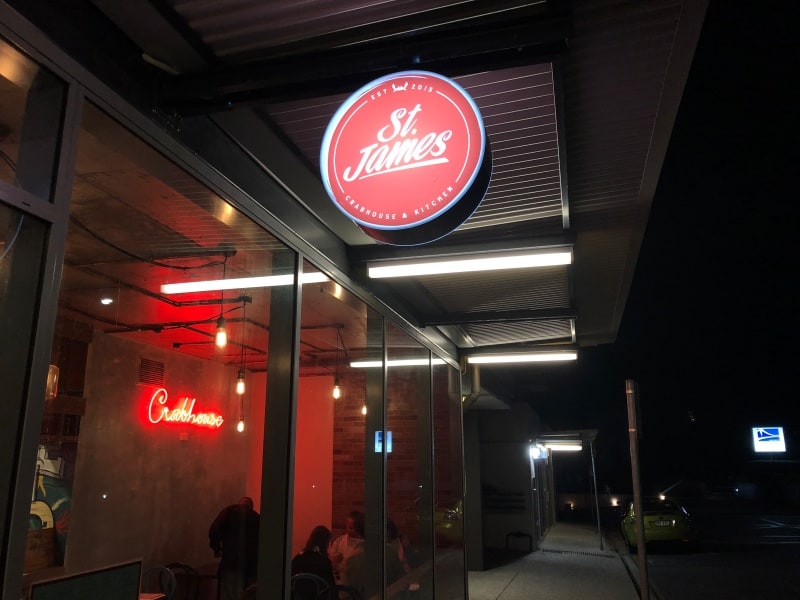 The Crabshack was almost empty when we arrived and we raised a bemused eyebrow at each other when we were asked if we had a booking. They managed to squeeze us in and we selected a seat near the exposed brickwork and event posters on the wall beside the kitchen.

The owner walked us through the specials and offered us the $100 per person platter which we decided was just a little too much to spend on a meal. Instead, spurred by a hunger from a full day of activities, we decided to have the garlic shrimps each, followed for Ange by the crab cakes while I had the full kilo of mussels and we shared some onion rings and a coleslaw. 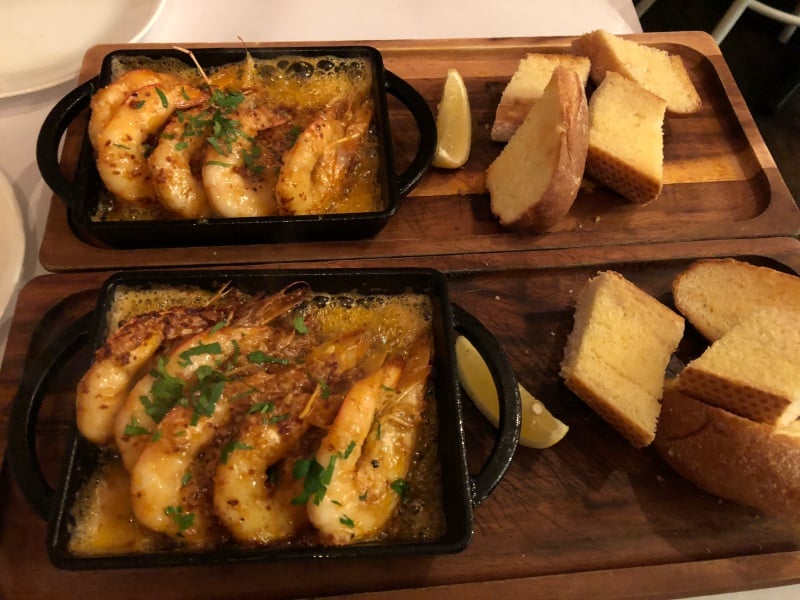 The waitress who brought our drinks also brought plastic bibs and gloves and showed us how to put them on. Ange didn’t need them having ordered cutlery-friendly food, but I availed myself of the bib, knowing how messy mussels can get when you add tomato into the mix. I didn’t realise that the shrimps would come on a hot plate, sizzling away dramatically. They were also accompanied by some soft toasted baguette, which was perfect for soaking up the garlic juices after the shrimp was gone. The best part was the size of the shrimps – so big that even after you chopped the head off and took the last of the shell off there was enough meat to justify the price. Lovely! Ange really enjoyed her crab cakes, but the highlight of the evening for me were the mussels. I’m a bit of a mussel snob, being lucky enough to be brought up in New Zealand. There when you have mussels, if they’re not the size of your thumb then they’re considered too small. Being spoiled like that makes some experiences in other countries a little disappointing, but Australia delivered, with nice big juicy mussels in a lovely tomato based broth. More baguette soaked up the broth once all the mussels were gone and after I got rid of the shells came the treasure hunt looking for mussels that had managed somehow to escape into the tomato-ey goodness. Full and satisfied, we waddled out into the night, happy with the meal. By the time we left the restaurant had filled up nicely and the volume risen considerably. It was amusing watching the owner offer the $100 per person special to everyone that came in – I wondered how many people would take him up on the offer, it seemed to be good value, just a lot of crustaceans!

In the morning back at the hotel we wandered down to see what was on offer for breakfast. For $10 per person we got an impressive continental offering including, juices and milks, three different breads for toasting, five different cereals, yoghurt and fruit. Tea and a coffee machine rounded out the offerings. The breakfast room itself was a cool space with a book swap and newspapers should you get bored with the news on TV.

There were a few additional amenities we didn’t avail ourselves: the on-site restaurant, the free bike hire, the coin operated laundry (hidden away in the basement), and the swimming pool which was accessed through the carpark outside the reception area. The steps from the front office passed over the pool and when we left I looked wistfully at the cool and refreshing water. Tempting to just jump from the steps – next time! In a heartbeat! A great place to stay in Kangaroo Point with everything you need for lengthy stays with enough room so you don’t feel cramped and all the mod cons including a dishwasher in the full kitchen.

The Il Mondo Boutique Hotel supported our Brisbane trip by providing a complimentary stay. All opinions remain our own. 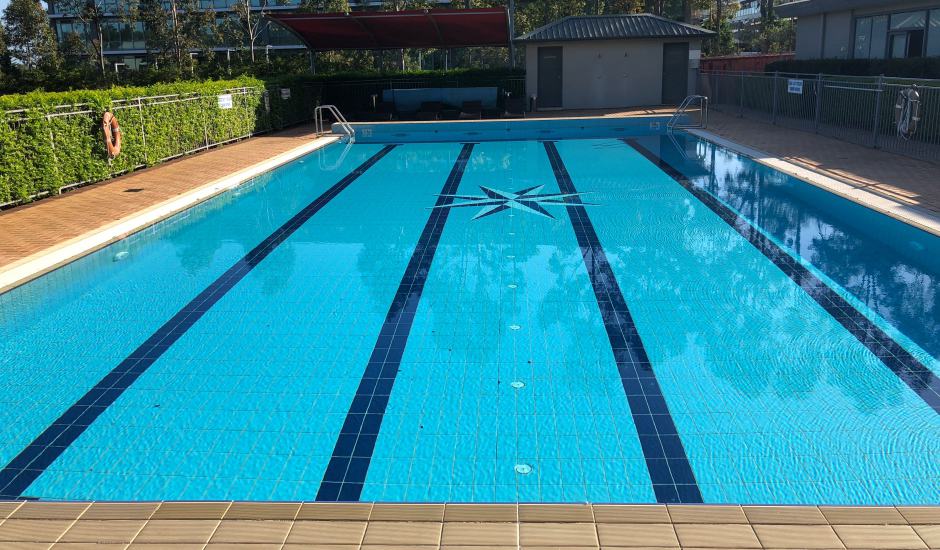