A week on the Isle of Skye! What could be better? A week at the Cuillin Hills Hotel, that’s what. Situated on the headlands looking back over Portree Harbour with great view of the colourful buildings that Portree is famous for, the Cuillin Hills is a 4 star 19th century hotel.

We were early as usual and enquired whether our room might be ready. The receptionist checked her computer and we smiled when she told us it was. We headed up the stairs and along the hall to our room, checking out the photos of Skye’s wild attractions as we went.

The room itself was huge – an enormous super king bed with ten pillows/cushions on it taking pride of place. It was two singles pushed together but the mattress was thick enough that we didn’t notice at all.

A full dresser and desk with ample drawer space allowed us to unpack and feel like we were at home, the TV was also huge and pivoted on its frame so we could swivel it around and watch from the round table and two armchairs in the corner.

Because of Covid-19 restrictions, the hotel had removed the £5 room service charge, so dining in-room was an attractive option. If we got the breakfast door hanger filled in and hanging on the door by 3am we could get anything we wanted delivered between 7:30am and 10:00am.

This proved an excellent option when we were heading out early for a tour or catching a bus. The breakfast was included in the room rate so there was no limit to what we could order.

I felt just a little bit bad when the delivery guy puffed his way in having carried the heavy tray all by himself from the kitchen, up the stairs and into the room. They did have little trestle tables that they set up outside the room and rested the tray on while knocking.

Being there for so long allowed us to see those rare incidences when things don’t go perfectly – there were two of these in our stay. One morning there was a knock at the door at 7:30am. We were awake and Ange went to the door to be greeted by the trestle table and a tray of breakfast on it.

She called out after the delivery guy “Excuse me! Hello! We didn’t order breakfast!” The guy came back and didn’t seem too bothered “Well, I can take it away if you like?” I immediately suggested that that wasn’t necessary and that we would take it – I hate to see food wasted and we were awake anyways.

Ange was worried if we took it that someone else would miss out (which would mean that the error was one of wrong room), but the waiter confirmed that it was for our room number, and so we said that we’d take it.

We looked at what the breakfast was and it was what we had previously ordered, so we figured the old door hanger had somehow got back into circulation in error. Seriously, talk about first world problems!! Oh no, our 4 star hotel accidentally delivered a delicious cooked breakfast!

The bathroom boasted his and hers sinks which Ange loved – no more of my whiskers or toothpaste splatter interrupting her beauty regime. The shower had a rainforest showerhead which I always love, and the bath was the perfect size for luxuriating the aching muscles after one or other of our walks on the island.

……And when the wind blew and the rains came it was decadent to bathe while sipping a wee dram of the local product.

The toiletries were Algotherm and while I didn’t really need the shower cap, shampoo and conditioner it was good to use the shower gel and soap. I figured that the local seaweed probably wasn’t used in the formulations of the products – the gap between high and low tide all around the island was speckled with different species of seaweed, but Algotherm is made in France so they probably used locally sourced macroalgae.

We could elect how often our room was made up which was good – Ange hated the waste of having towels replaced every day, but I was tempted because each time they made up the room we got free bottles of water and shortbread. It’s always good coming home to a clean room!

The view from the room was awesome, a constantly changing vision across the harbour where you could watch the clouds roll up the Loch. There was one day where a storm hit, a constant barrage of wind and rain and even though the window rattled slightly when buffeted by particularly strong gusts, we were perfectly snug all day.

It was a little mesmerising watching the changing light as clouds raced across the sky and the harbour hues melted one into the other – dawn especially striking.

The hotel had its own Scotch bar, a nook beside the main bar where you could select one or more of the many flavors on offer. The bar itself was off limits due to Covid, but that merely shifted where you needed to drink your drinks.

The picnic tables on the front lawn had online ordering, so if you picked your moment between rain showers and enjoyed the sun, you could use your phone and enjoy a libation while watching the next shower cloud approach across the harbour.

The food was amazing the whole time we were there and the other small hiccup occurred one day when our room service order for lunch didn’t make it to the kitchen. Again, another first world problem: we had to ring again and they sent it up within 20 minutes. Boo hoo!

Staying for a week and having most meals at the hotel, we learned what we liked from the menu and obviously recognised the waitstaff. If I was more of a people person I would have learnt all their names, which is a pity because they were all friendly and lovely, and gave great service.

The leek and potato soup was our first introduction to the restaurant and while I was under the mistaken impression the garnish on top was bacon (more likely deep fried leek), it certainly set the standard for the rest of the meals.

When we asked if there were any recommendations the waiter mentioned that the scallops were fresh and that you could actually watch the scallop boats landing their catch in the port over the harbour.

As good as they were, the star dish for me was actually the starter portion of the mussels, served in a white wine broth and crusty bread. Really good value – there must have been close to a kilo of them for £8.50. We had them a few times while we were there!

Another item we kept coming back to was the burger. Definitely better with the cheese and bacon, it came with a little salad, chips and onion rings. I had fomo with Ange’s fish and chips so obviously had to have that the following night!

Let me pause and reminisce about the sticky toffee pudding. It had quite the range of textures, from the pudding itself, with the obvious toffee sauce, but the ice cream that accompanied it was sandwiched between a biscuit-y topping and some sort of ganache.

The second time I ordered it I made sure not to repeat the error, and when I said I’d have it later they said that they wouldn’t make it at the same time but just to ring down 10 minutes before I was ready for it and they’d make it and bring it up. Cue the most pompous phone call you have ever heard:

“Hullo recepetion, how can I help?”

While we were staying at the hotel we did a tour which offered a hotel pickup and drop off. Now we only arranged to go on the tour a day before it actually left and on that day that we arranged it we didn’t want to leave the hotel because there was a storm: a constant barrage of buffeting winds and squalls of torrential rain.

So, no way of making the ten minute walk into the centre of town to get a sandwich and packet of crisps from the supermarket in town. We asked if the hotel did a takeaway lunch and were told yes, we could get a bagged lunch for £10. So for the £10 each we got a sizeable sandwich, bottle of water, packet of crisps, piece of fruit and a pair of shortbread biscuits, all in a brown paper bag.

Hell yes! The room was large, the bed was huge and comfortable, the views were gorgeous. The food was delicious. And the friendly staff were the icing on the cake. Very much recommended! 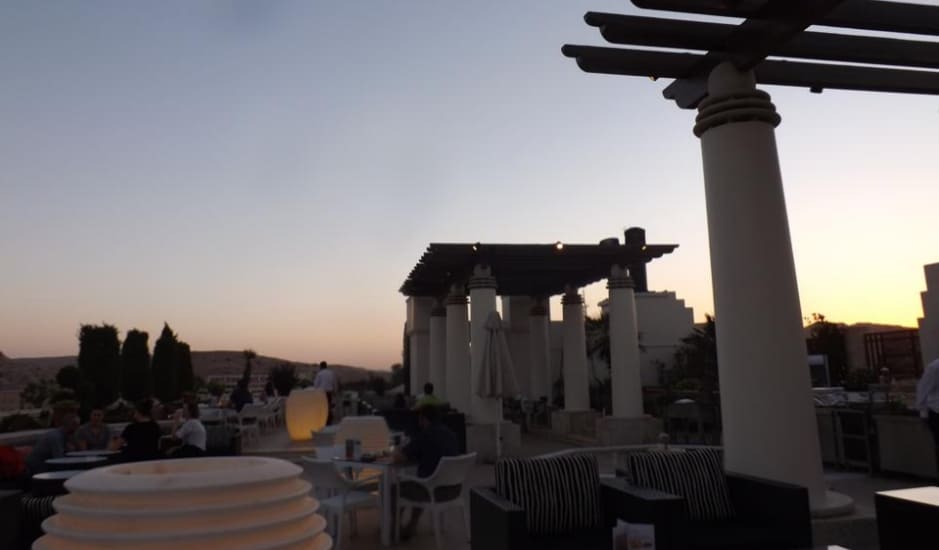 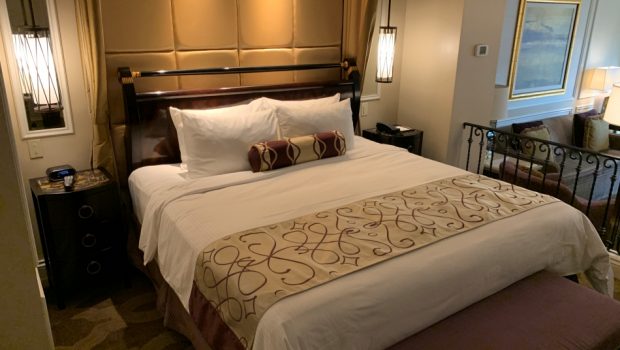