I get off the train from London, head towards the buses and am confronted with a kid, maybe three years old, lying on the floor of the station, sprawled in front of the ticket machines with his care giver standing next to him.

“C’mon Peter,” he says, pulling him away. I notice as he leaves that the kid sports a super thick monobrow. I’d told people that I was heading to Norwich and they’d all said variations of the same thing: ‘they’re a bit different in Norfolk.’

Every country has a region which takes the brunt of the inbreeding jokes, so I assumed that Norfolk was the UK’s answer to the stereotypical redneck hillbilly gleefully declaring that his cousin was his favourite sister. I found the bus stop which would take me out to The Broads where we were staying at a nice little B&B called The Hill House.

The next day we headed into town to have a look around. Ange had seen that Norwich had a Hop-On Hop-Off Bus so we were keen to get our bearings from that vantage point. 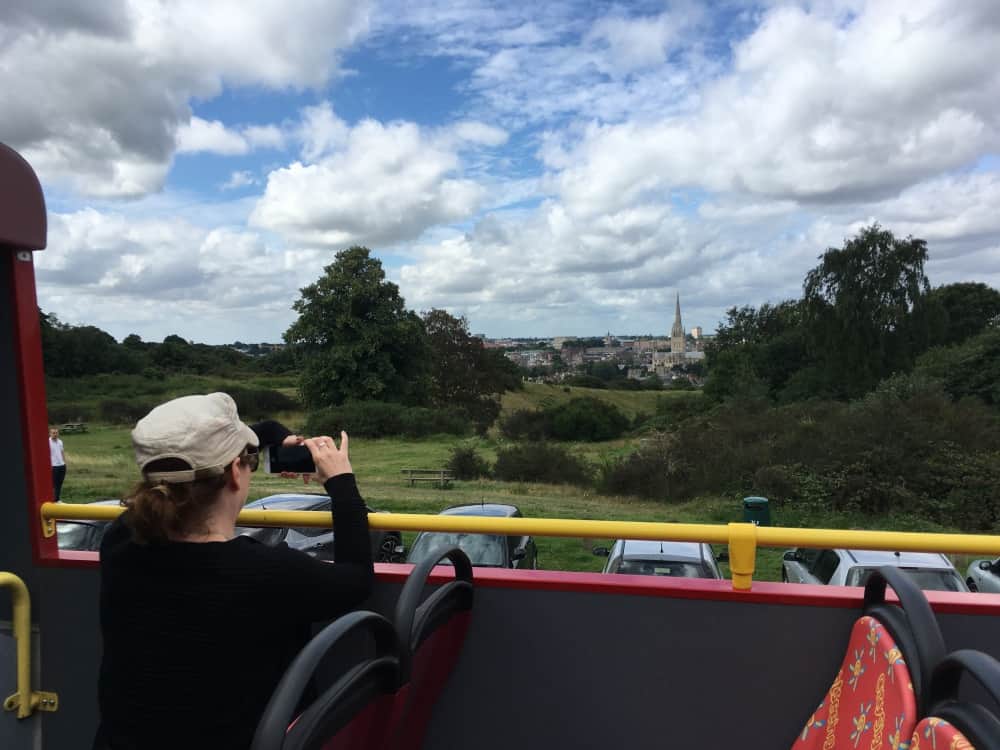 On the way from the bus stop to the starting point we noticed that there was some sort of carnival – crowds of people starting to form with singing and recorded music echoing across the city centre.

We arrived at the starting point for the Hop-On Hop-Off Bus and chatted with the driver – we were 15 minutes early and discovered that he didn’t accept credit cards. so taking advantage of the 15 minutes we headed back into town to find an ATM.

I gave Ange a wry smile and reminded her of one of her “first rules of travel” – when you arrive at a new place, always have the local currency on you. It tended to be useful for foreign countries, but travel is travel…. Naturally enough my bank was upgrading their systems so none of their ATMs worked.

Instead, the entire staff of the local branch were outside the bank, talking to people about what they were trying to do and directing them to the other ATMs around the city. This was on a Saturday, so I wasn’t sure whether to be upset that I couldn’t get the cash out or impressed that they were working on Saturday to try to offset the inconvenience.

Either way we dashed further away form the Hop-On Hop-Off stop and eventually found an ATM at a supermarket.

Suitably cashed up, we headed back to the big red bus stop and got our ticket. We’ve had mixed experiences on other Hop On Hop Off buses (in Nice and Catania) so it was nice to have engaging commentary and interesting stops.

Ange filled the gaps in the commentary with discussions about what she had done during the week and what she’d seen. Before long we were back to the start and making our way towards Norwich Castle. 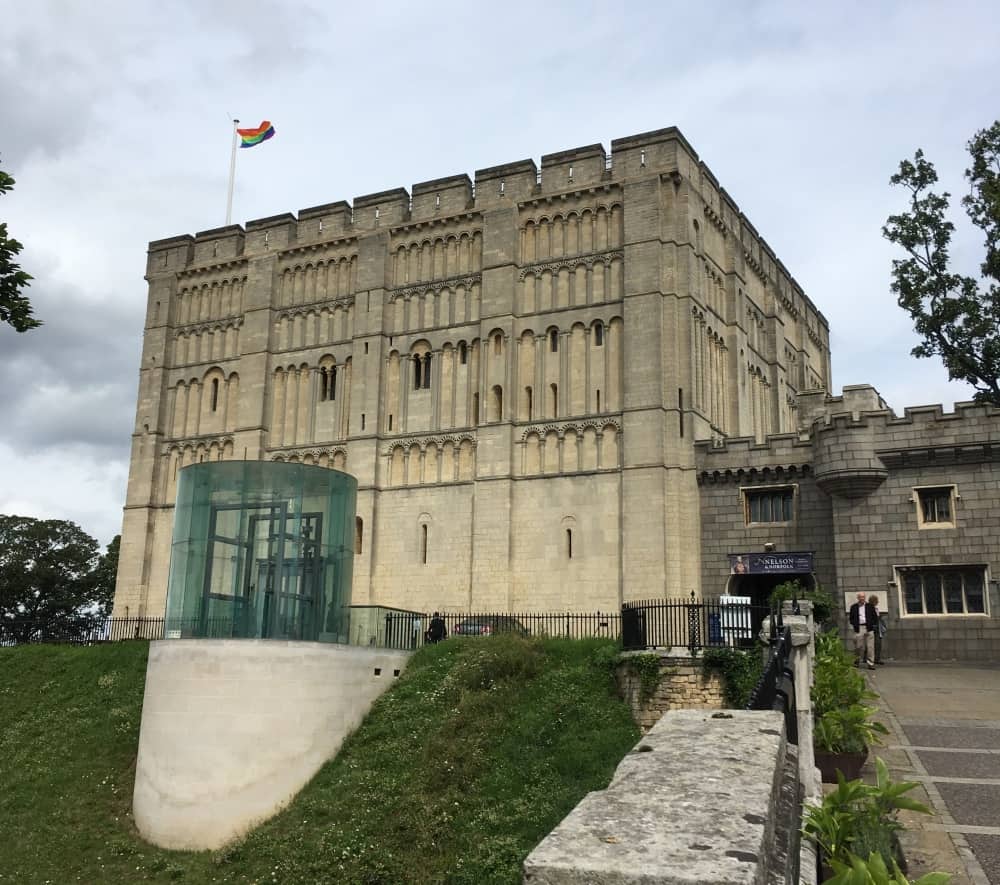 I’m a great fan of castles but the one at Norwich wasn’t particularly picturesque – typical of castles who are used for less military uses. In this case, the castle had been used as a prison for a long time. I didn’t have high expectations which meant that the sheer volume of exhibits was a pleasant surprise. 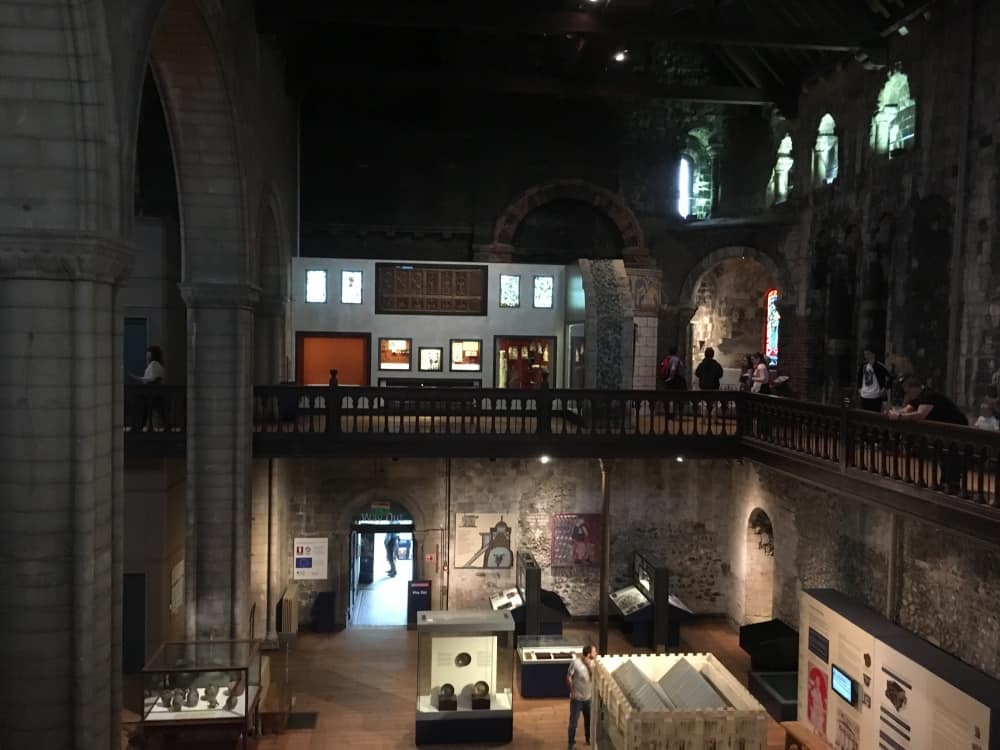 There were sections on the natural history, Norwich’s role during history from the pre-Roman times to the present, as well as a special exhibit on Nelson, the local hero who almost single-handedly brought down Napoleon (or so it seemed!). The piece de resistance of this was the tricolour captured by Nelson in the battle of Trafalgar. It was simply huge. 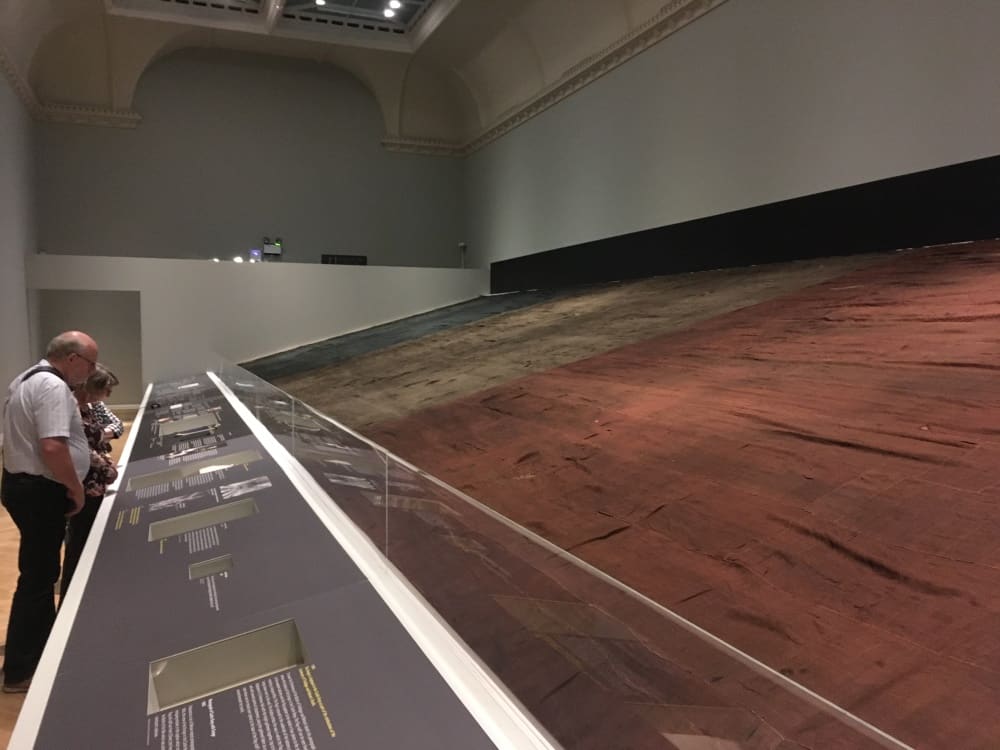 We headed to the cafe to grab something to eat prior to the two tours we had booked ourselves onto, one to the basement and one to the battlements. I got the Ploughman’s lunch and Ange got the quiche. I was totally overwhelmed with the huge hunks of cheese and ham I got, along with a delicious chutney and generous portions of french bread. Unexpected and it really hit the spot. Very reasonably priced also. 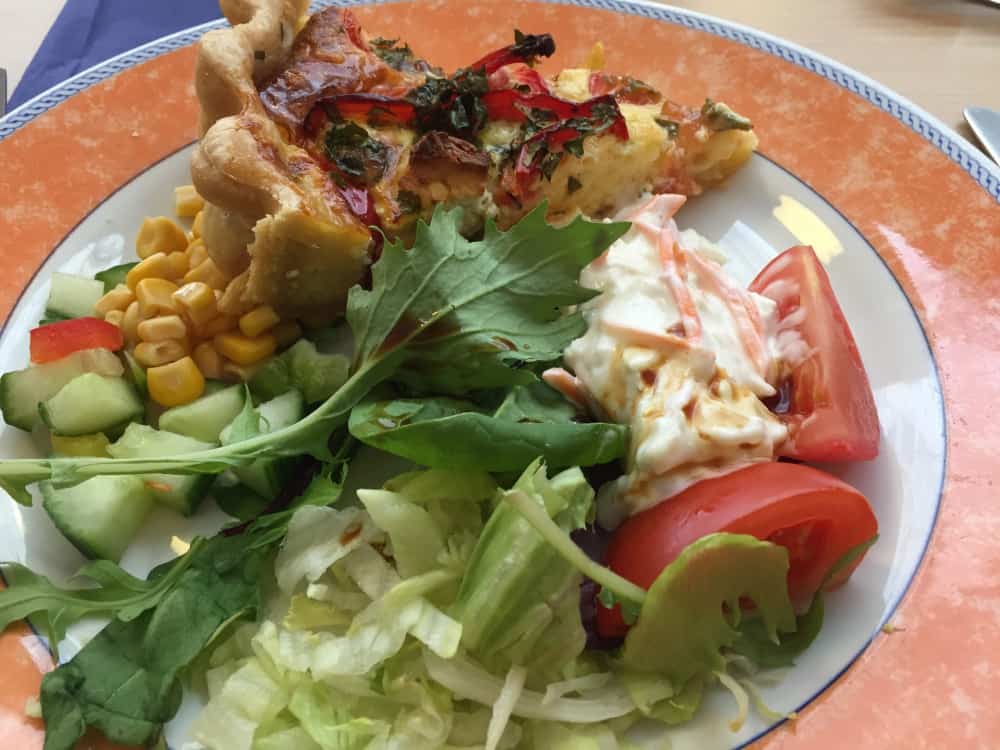 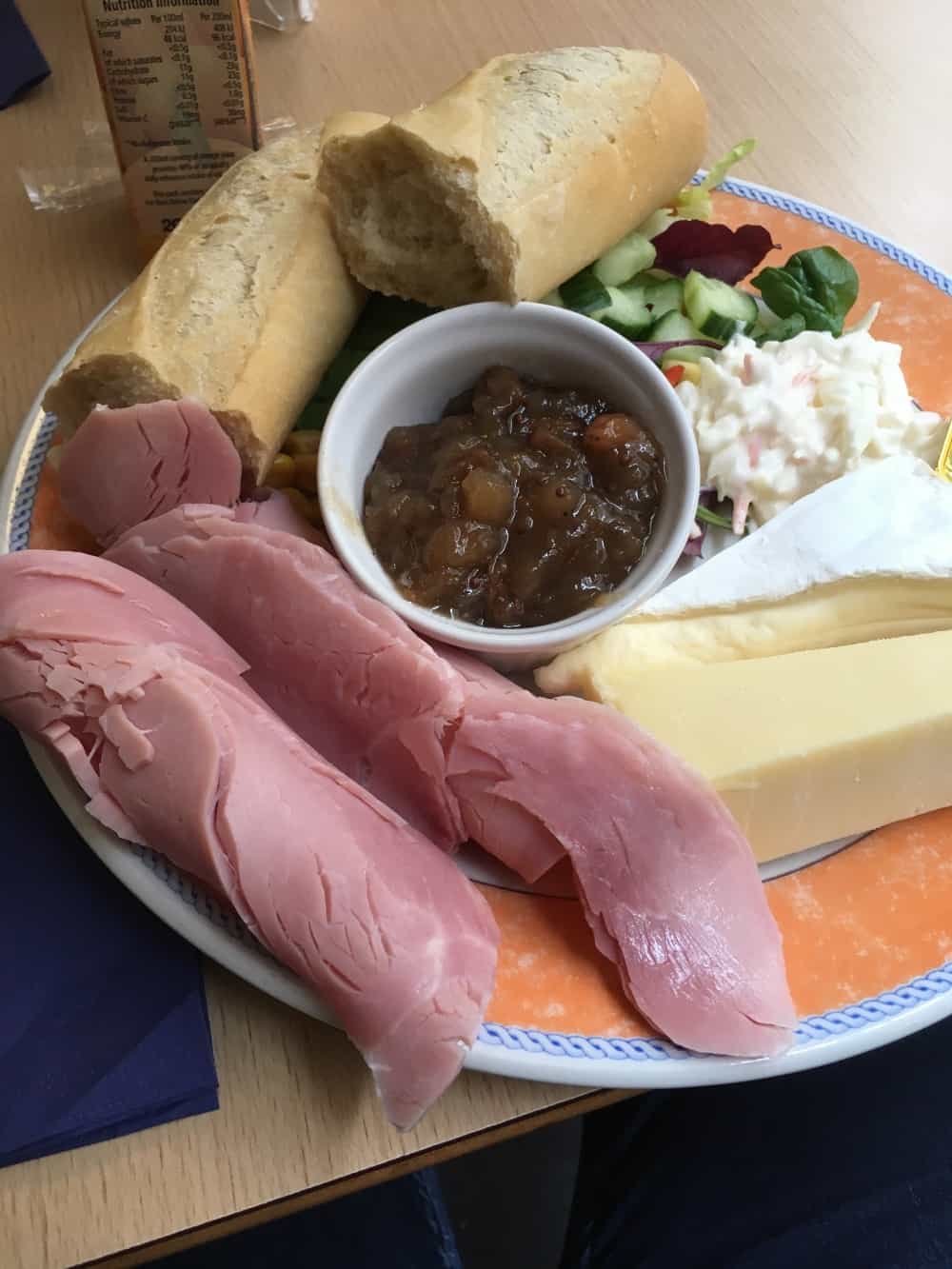 Then it was time to head into the bowels of the castle. Our guide led us through a hidden door in the gift shop and downstairs until we were in the depths of the castle dungeons. We were told about the life of the prisoners and the conditions in which they survived their time in the jail. Pretty dire. 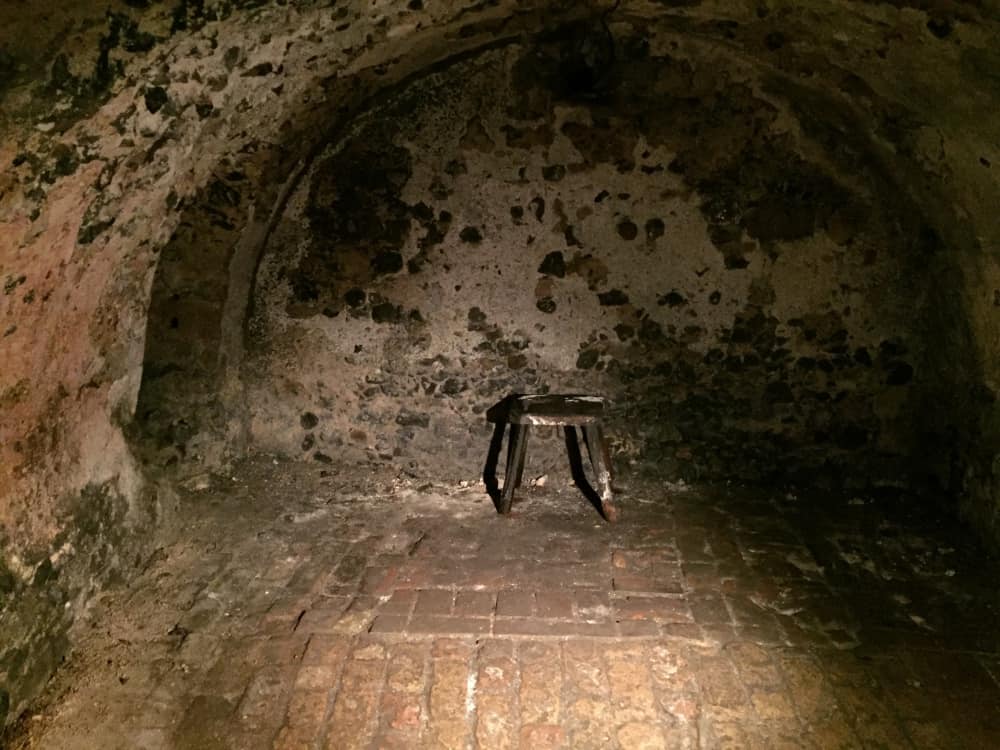 Death masks were made of the faces of the prisoners after they were hanged and plaster reproductions of these were handed around. Grim.

We were short on time so we could only briefly halt in the room of medieval torture devices. The guide asked someone to point to one of the implements and he’d tell how it was used to cause death in the most gruesome of methods. For those of us towards the back half of the group all we could do is look out over the city and admire the view. Definitely not good value for money. I was surprised how long we ended up in the castle – it was three hours and I think we could have spent more time as well, but the rest of Norwich beckoned. 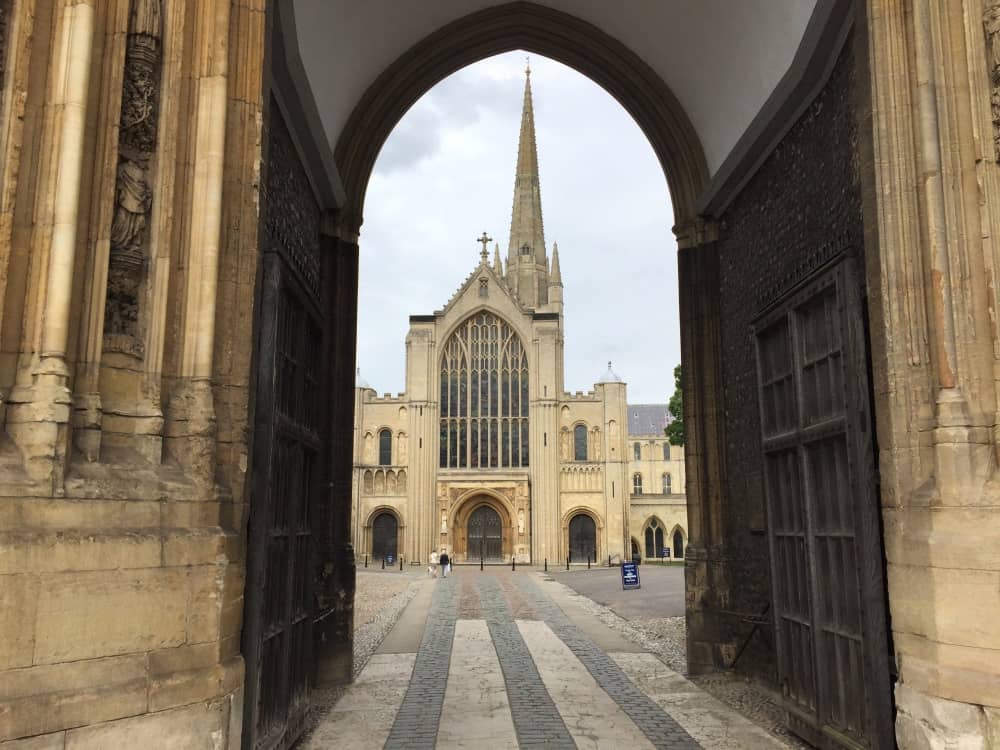 We tracked down the Cathedral and checked out inside. I liked that it was free, but apart from that it was indistinguishable from all the other cathedrals we’d been to – much more capacity than required these days and grandiose ornamentation – a throwback to the days when religion was a larger part of every day life. On to the cinema we went, to see Dunkirk on the big screen. We splurged for the premium seats and enjoyed the whole experience. Afterwards we had to make a hard decision: we were tired from all the walking around we’d done, but starting to feel a little peckish. Of course there were ample eateries near the movie cineplex, but we were keen to see if we could get back to the B&B before true hunger hit. So instead of getting something to eat we headed back to the bus stop and back home.

Big mistake. We got back and were sitting on the bed when we realised that we couldn’t ignore the hunger, so we headed out into the night for something to eat. After a trek around the nearby pubs we discovered that Saturday nights after 10pm wasn’t a good time to be hungry when you were 30 minutes from the centre of town. We managed to get something though from a pub that was open, and headed home sated. 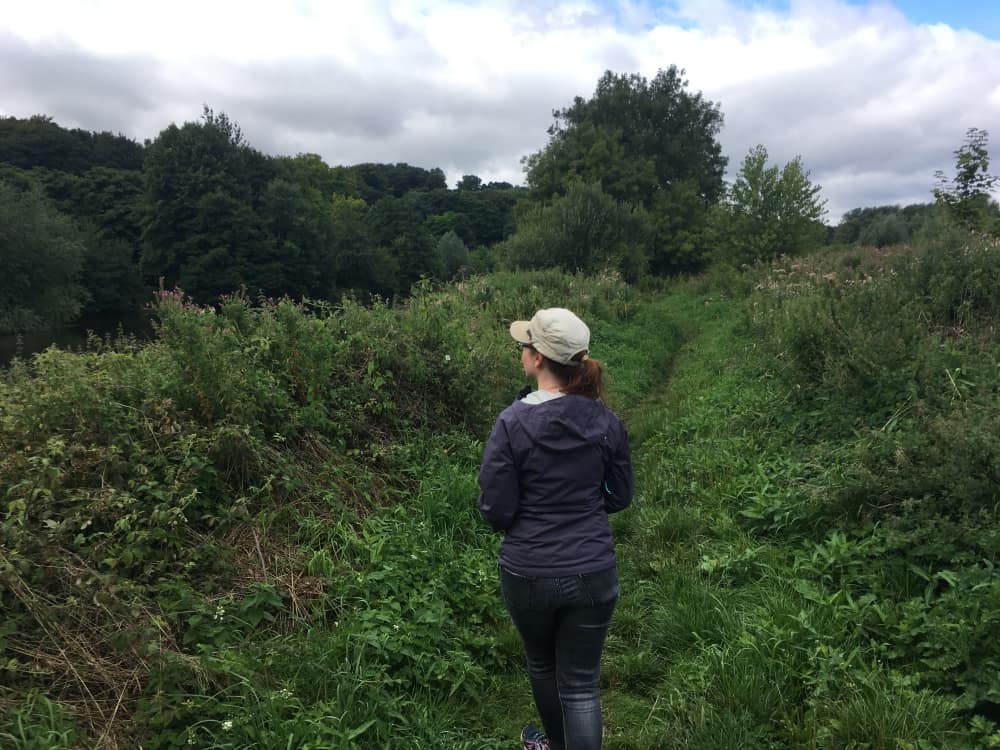 The next morning we briefly discussed hiring a boat and taking a trip on the Broads, the canals that criss-crossed the area. They canals were the remnants of peat mining. We found boat companies that would take us but they started and ended at either end of the river and we were staying about halfway along. In addition we had particular trains we had to catch, so couldn’t afford too much dilly dallying.

Instead we went for a walk along some paths we found on Google Maps. The wetlands were nice: on one side you had marshlands with various warnings about the dangers of swimming there, and on the other side you had a fast moving river with kayakers and people camping on the far side, despite the less than clement weather. We didn’t see too many people – the odd person walking their dog and one or two people living on board boats moored to the banks. But most people had more sensible things to do that gallivant around the wetlands when it was threatening to rain. Thinking ourselves lucky for dodging the rain, we got back to the B&B and checked out. Shlepping our suitcases on the bus amongst the Sunday commuters wasn’t much fun but we were able to get to the train station in plenty of time.

After exploring a bit we found an almost empty waiting room with comfortable couches, power sockets and free wifi. I almost fell off my seat at the extent of the facilities! The time waiting for our trains almost passed without comment save for a fellow passenger who decided that the squeaky chair he sat on would make a lovely soundtrack for his wait.

I noticed one or two of the other passengers raising an eyebrow but in the good old English manner opinions were kept to themselves and nobody said anything. He wasn’t there long anyway, and neither were we – me heading back to London and Ange on her way to Leicester.