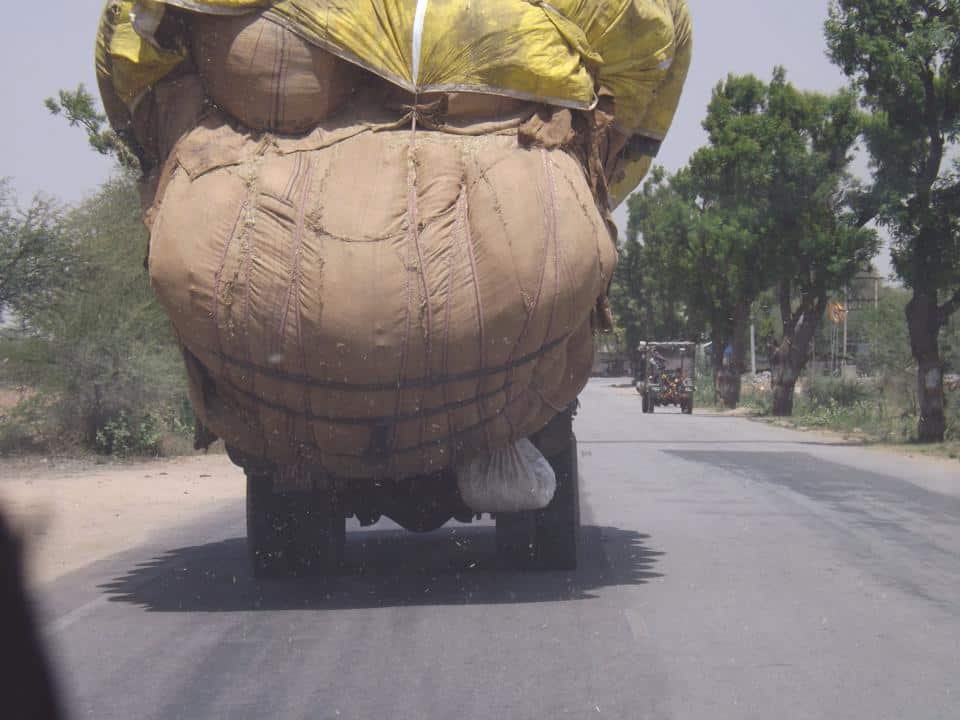 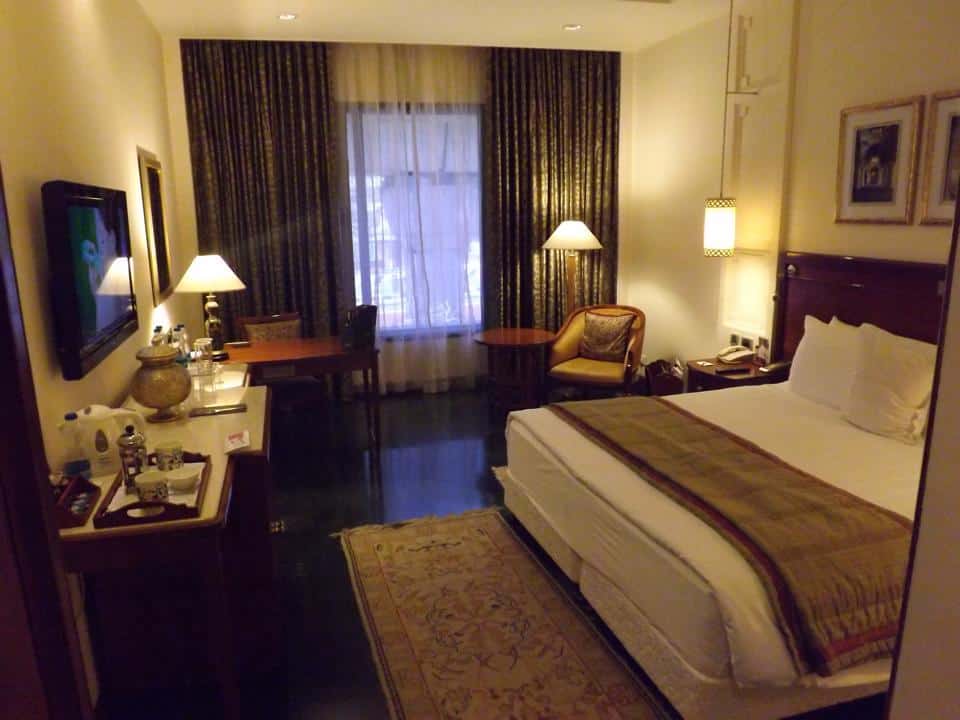 The trip from Ranthambor to Jaipur goes by without incident – I’m getting used to overladen trucks on the road and laying on their sides after dubious overtaking efforts, and I am dropped off at my hotel, the ITC Rajputana. I only take the time to check in and dump my bag before heading back out past the Amer Fort to the Rajistali Resort hotel where my brother and sister-in-law are staying with their one year old. 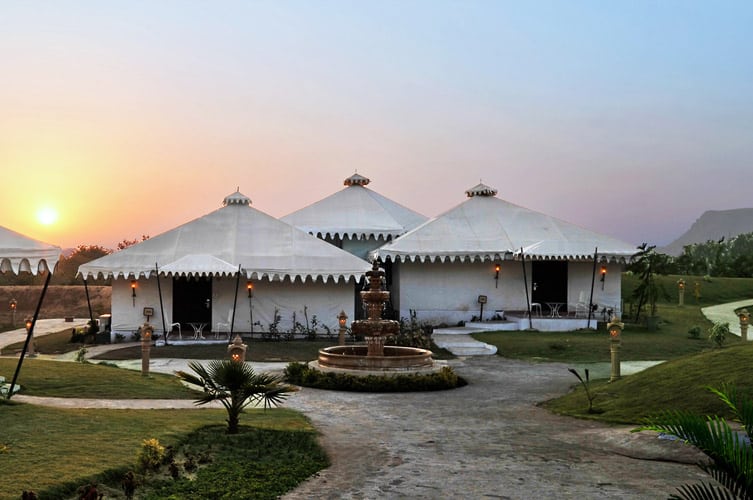 It takes me a while to realise what bothers me about the Rajistali. It’s a new hotel complex at the foot of the Aravalli hills and consists of a large building in what I’ll call Nouveau-Mughal style plus an array of tents all on an estate served by golf-carts. All the buildings I’d seen to date in the Mughal style have been ancient. Seeing a brand new building in the style seems incongruous – like seeing the Eiffel Tower at Las Vegas!

It might be because its so new, or perhaps we’re in the off-season but the hotel feels empty and I enjoy a good few hours with my family, swimming and eating in one of the restaurants with nobody else around. Very occasionally we see someone heading off to one of the other rooms, but that is the exception rather than the rule. I get the low down from my brother and by all accounts the hotel is lovely, and the room my brother en famille are in is spacious and suitably luxurious.

I had arranged for my driver to pick me up early enough to get me back to my hotel in time for a decent amount of sleep and I regret not spending more time with family as I’m whisked from the darkness of the outskirts of Amer back into the bright lights of downtown Jaipur. 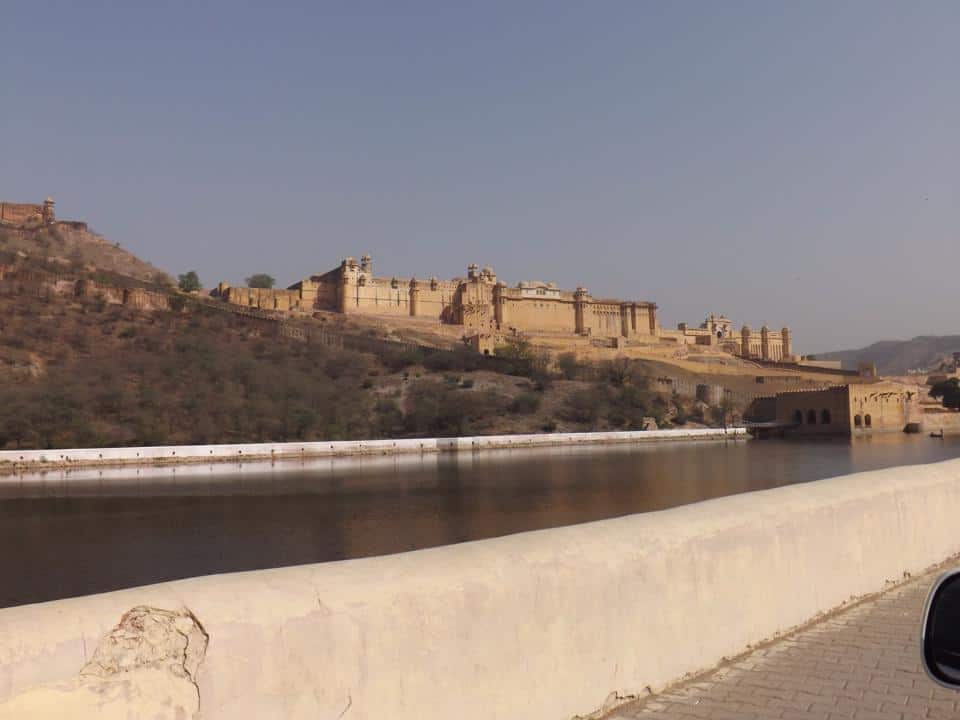 I’m up at dawn the next day for my last day of sight-seeing for the trip. I get dropped off at the carpark of the Amer Fort (sometimes called the Amber Fort) where a steady procession of elephants take tourists up to the interior of the Fort. I join what I think is a queue and pretty soon reach the head where I’m told the price, pay my fee and ushered up some steps to the top of the wall where a platform sways into sight. It’s at wall level so there’s the simplest of steps and then I am on the back of an elephant, heading up the hill. 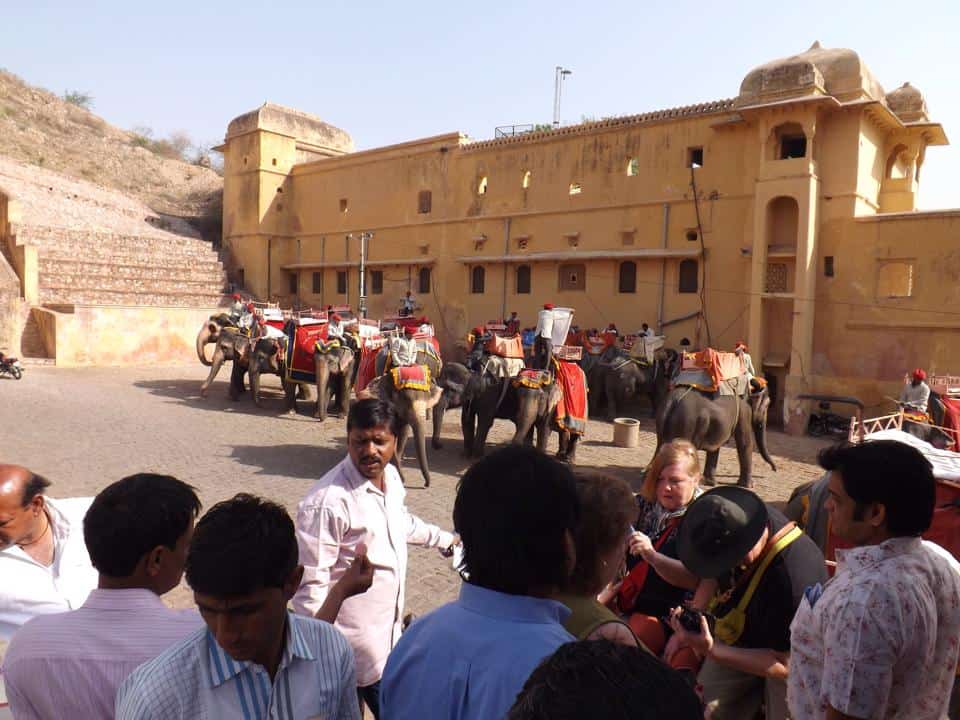 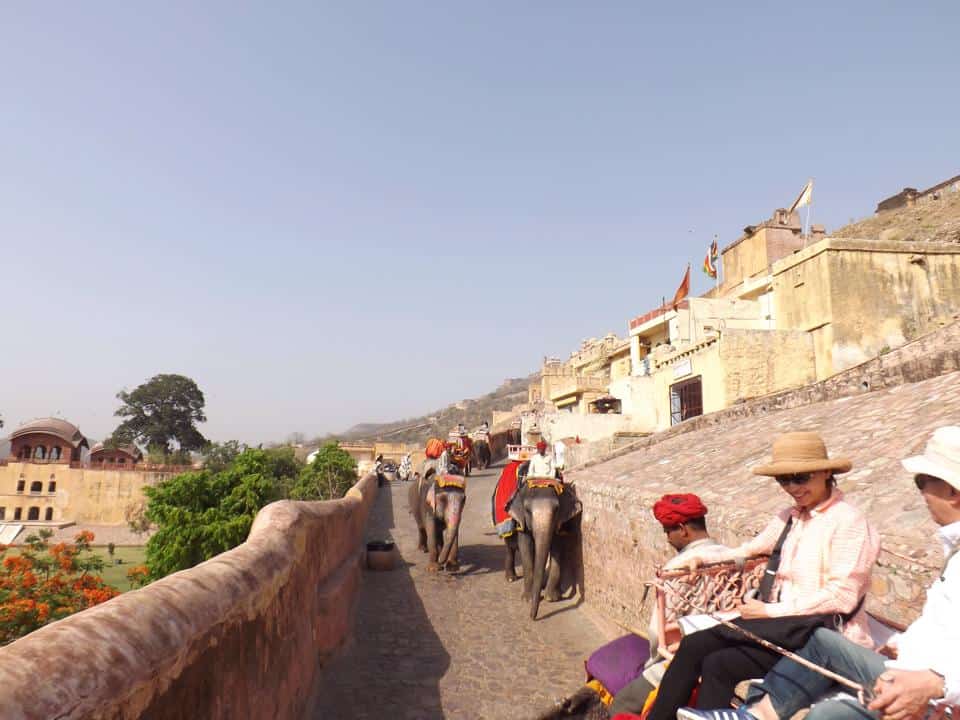 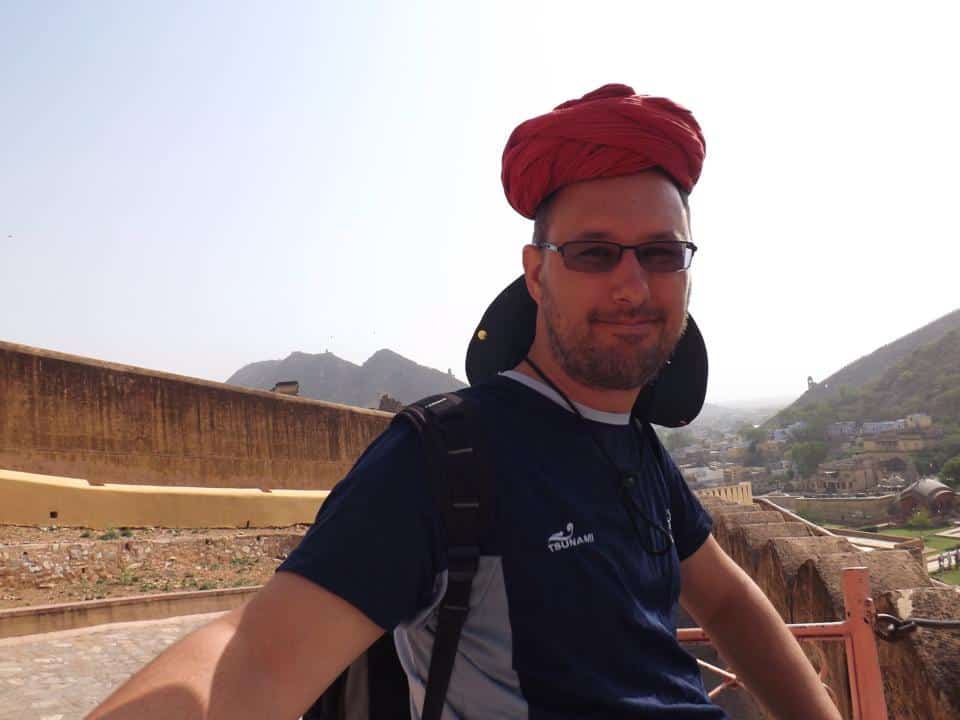 All the tourists sit side on to the path of the elephant and some elephants take two or three tourists at a time, so I don’t feel bad for my steed. The drover (driver? pilot?) attempts to curry favour by demanding he take a photo of me wearing his turban, and I agree.

We’d been warned by the officials at the loading point not to tip the drivers but as we reach the top and enter a holding pattern waiting for dismounting, my driver duly demands a tip. I just shake my head and he gets the idea pretty quickly, but I’ve read about tourists being told that they need to tip otherwise “there could be problems dismounting”. It would be tempting in that situation to point out that if you can’t get off, then they can’t get their next fare.

The other interesting thing I was told as I got onto my trusty steed was that it was forbidden to take photos of other people on the elephants, and I soon see why. There is a cottage industry of budding photographers taking photos of the tourists on the elephants as they head up the last section before the Fort entrance and then sprinting up the path to accost the tourists after they dismount with the products of their labour. I manage to dismount safely without being extorted for extra “unloading” fees or demands to purchase a majestic shot of me ascending, and take in my surroundings. 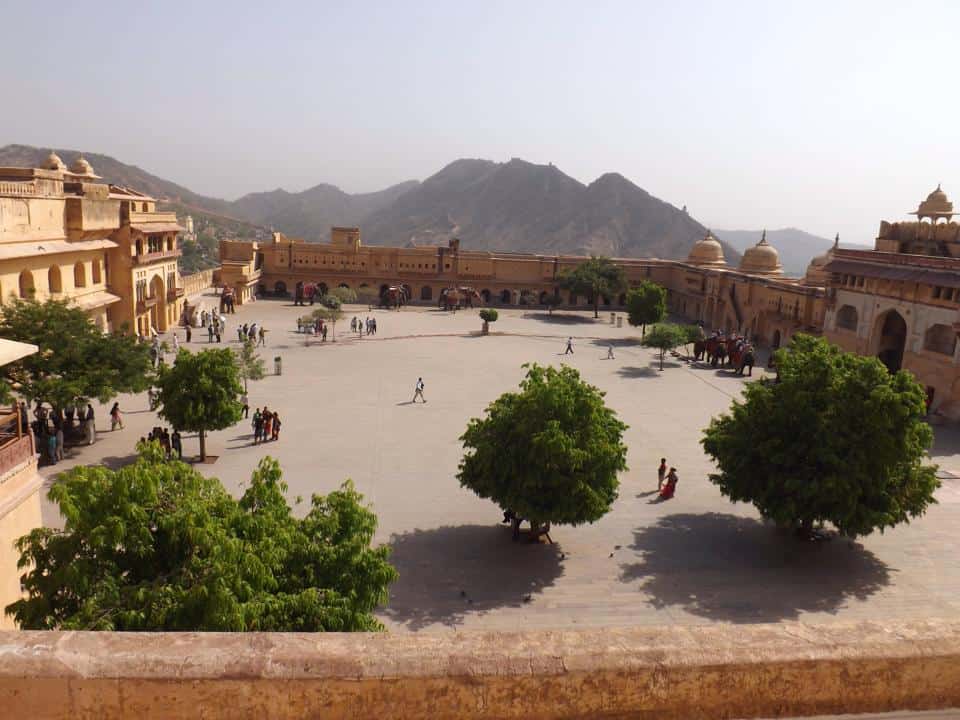 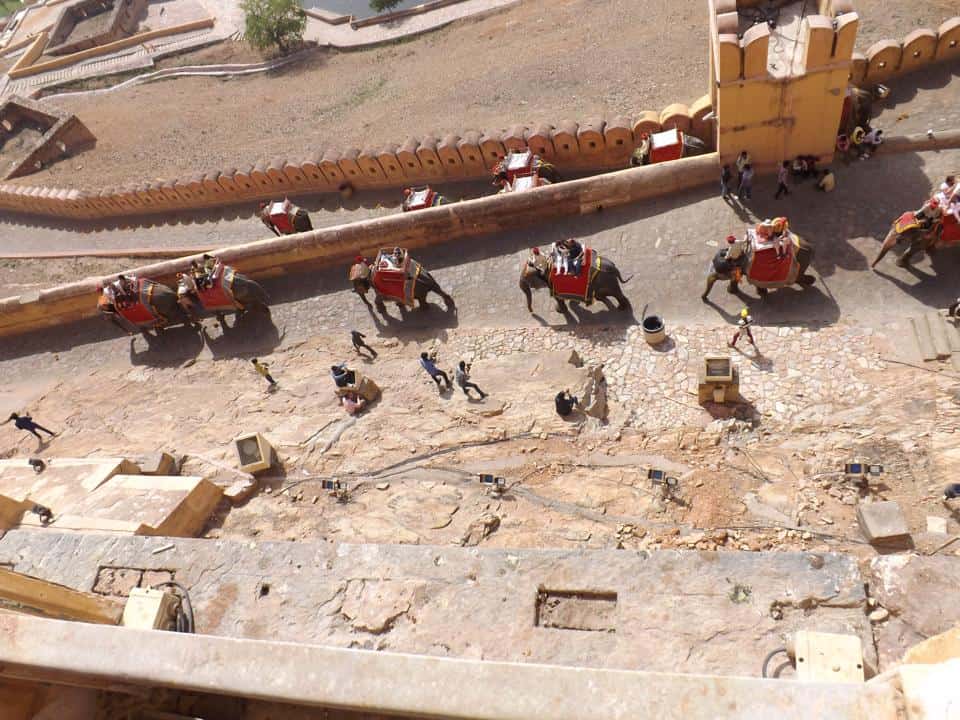 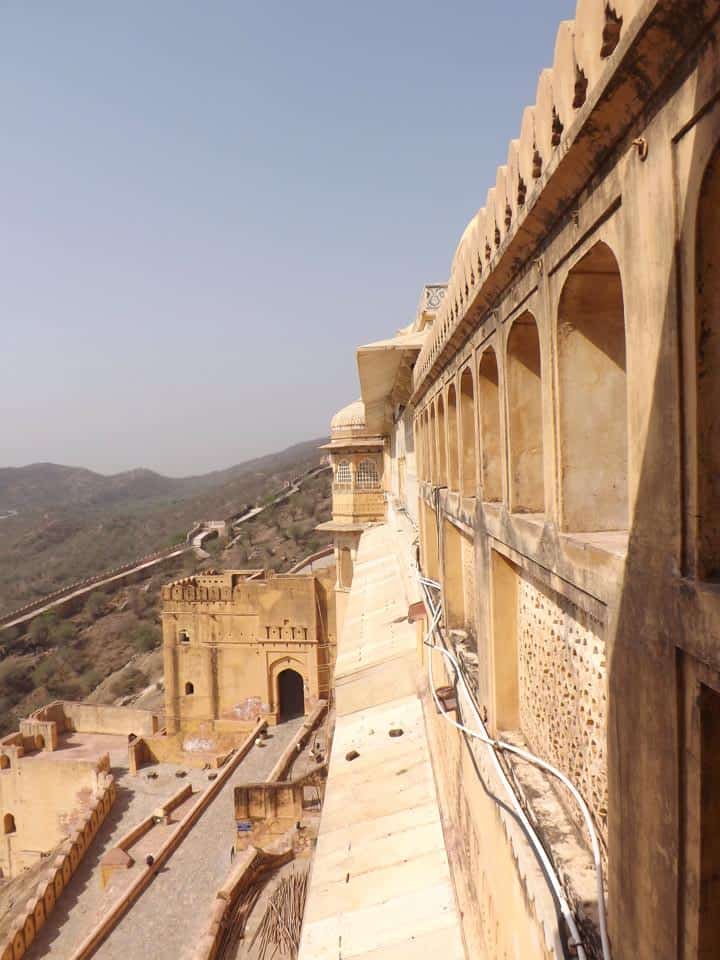 The Amer Fort is a complex of palatial rooms overlooking the lake which provides its water. I’m intrigued by the secret passage leading up to the Jaigarh Fort which sits on the hill above the Amer Fort and served as an even easier to defend position in case of seige. 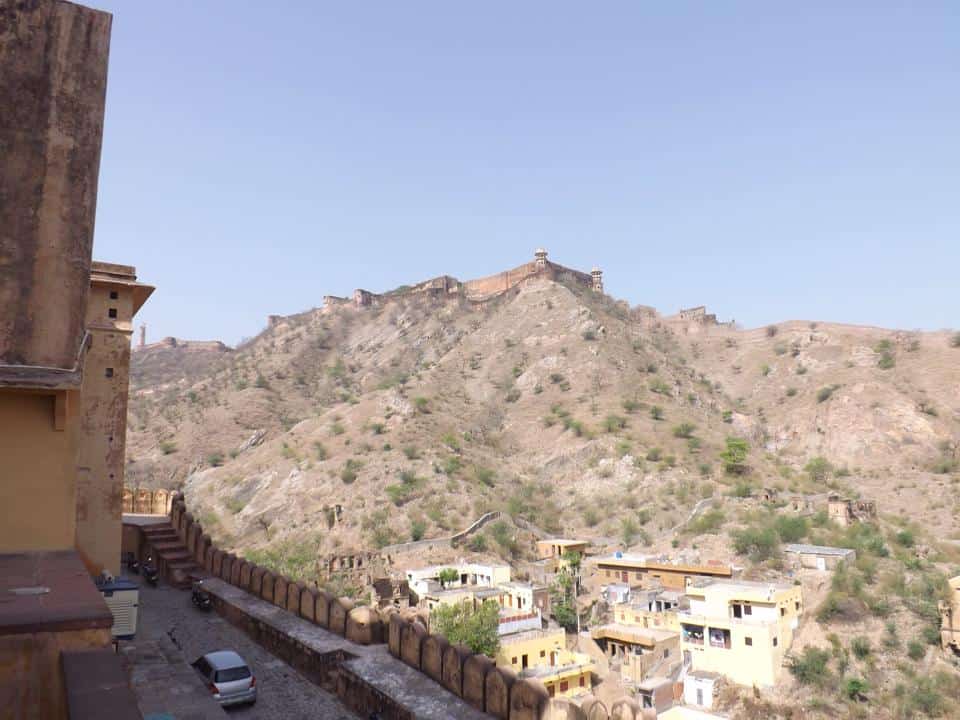 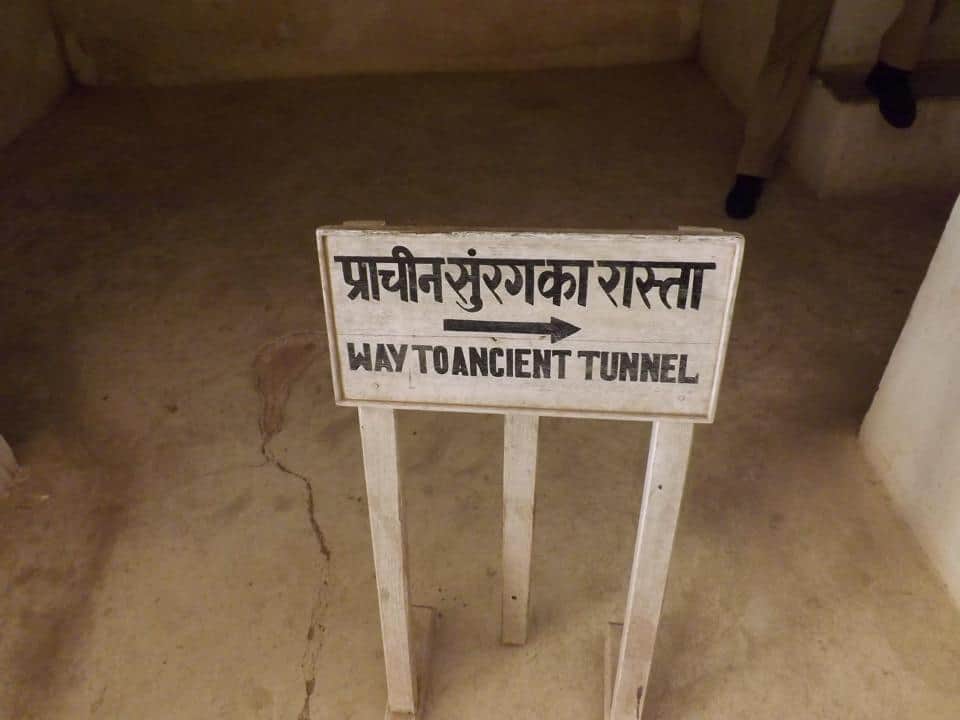 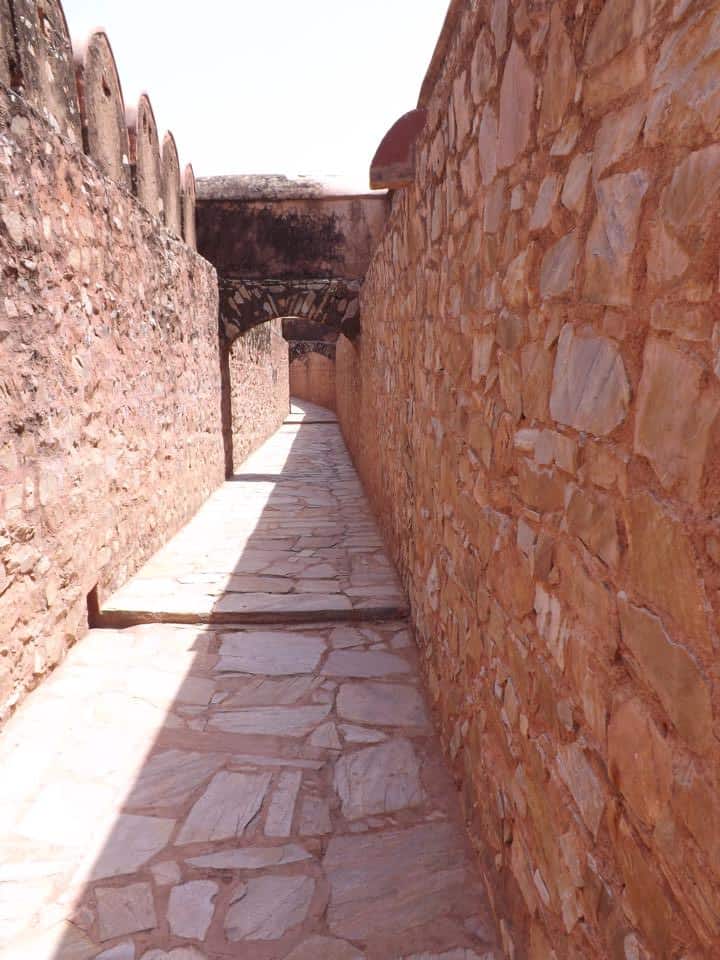 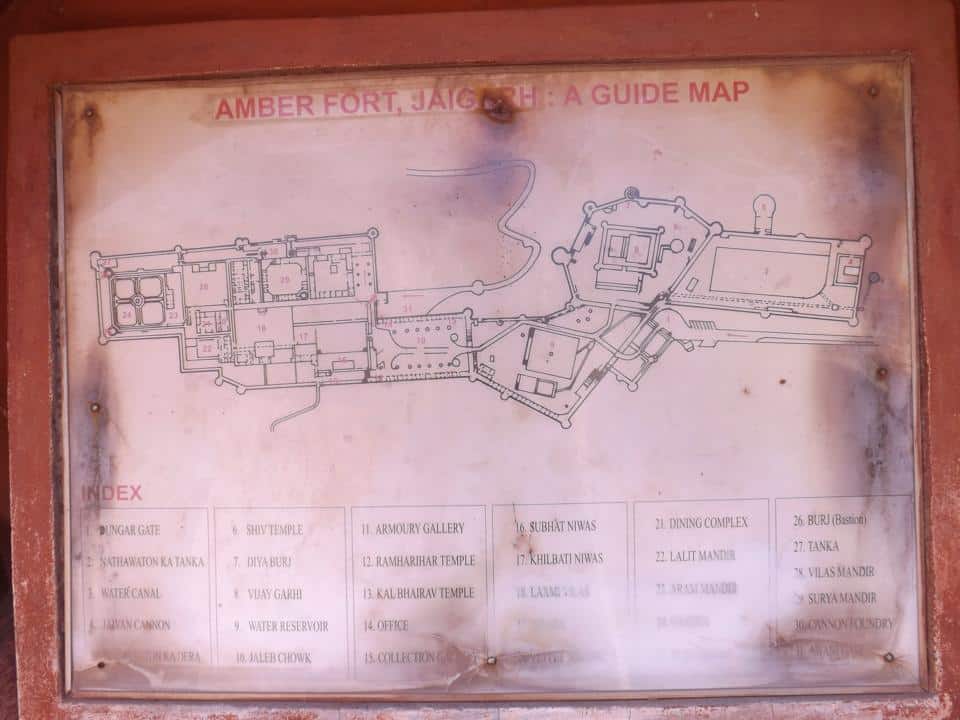 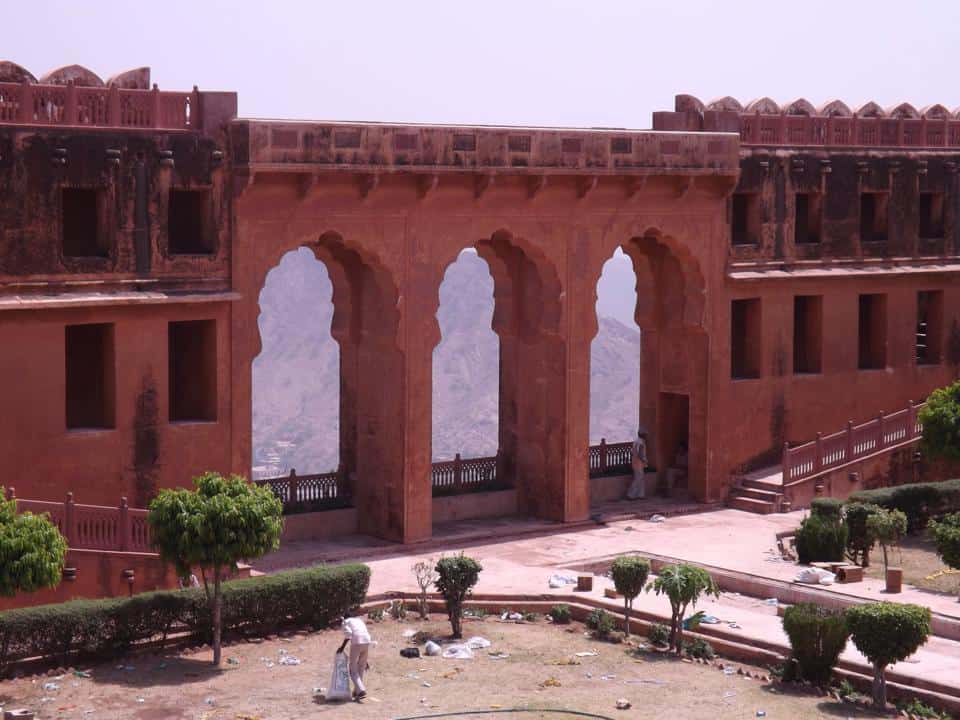 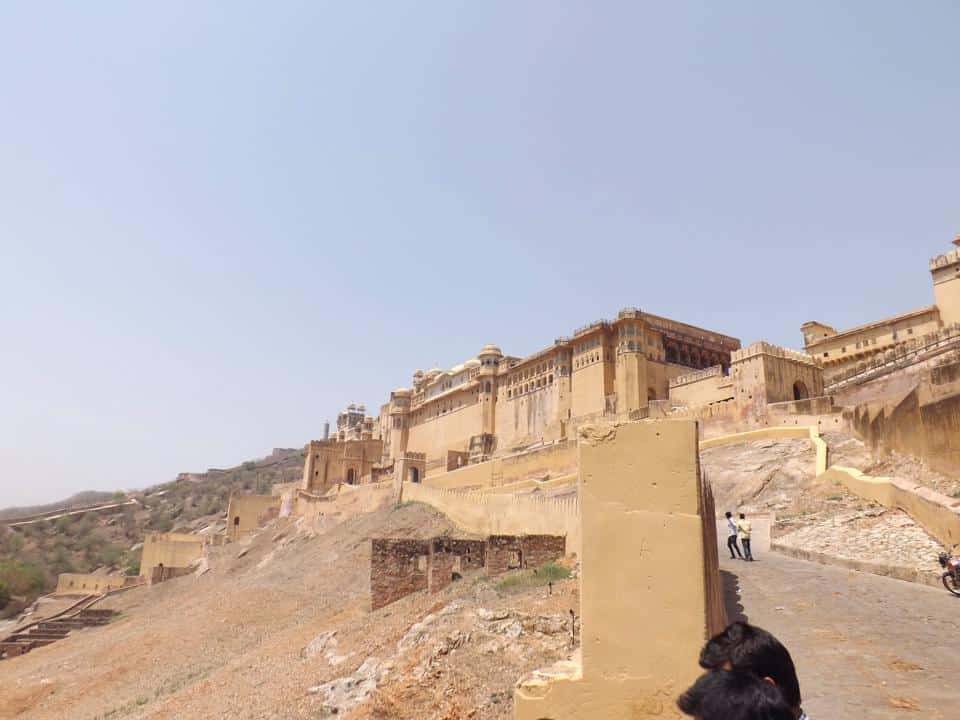 By the time I head down after investigating both forts it’s a lot later in the day and the rest of the tourists have left. The elephants have stopped their shuttling and I get some strange looks as I make my way down the path, dodging the elephant droppings on the way. I guess nobody else went up to the upper fort.

I connect with my driver and we head into town to visit the City Palace. I pass Jantar Mantar which apparently mirrors the one in Delhi which I visited at the beginning of my Indian trip, so I pass it by and concentrate on the Palace.

It’s a bit underwhelming to tell the truth – the other places I have been have had more impact because they are so much older – the City Palace is only from the 18th Century. It also loses impact by being smack in the middle of the city. Where it does excel though is in the other trappings of political power – the photos, furniture and furnishings which show this as being an historically significant place.

As we leave we pass the Hawa Mahal – the Palace of the Winds where the ladies of the court would eavesdrop on the conversations of the common people. I don’t know if I’m becoming all templed out but while I recognise that it’s beautiful, it doesn’t have the impact on me that the guide books suggest.

The final place on my list of things to see in Jaipur is the Monkey Temple (Galta Ji). Before I decided to get a driver and a car, I was seriously contemplating taking the bus to the far side of the hill which the Monkey Temple sits on and walking back to Jaipur via the Temple. I’m glad I don’t though because by the time I go there it is just before noon and the sun is boiling ball of hate.

My driver parks at the bottom and suggests that I get a guide. He indicates one of the young men loitering at the entrance, hiding under the shade. As I walk up the young man comes over and offers his services. I look suspicious and he tells me no charge, I’ll show you around. I smirk and wonder what the conversation will be like at the end of the tour and agree to be shown around.

We head up to through the complex, and I ask some questions which he answers. There are other youths lurking around and my guide’s presence keeps them at bay. One overly eager fellow comes up and demands money but is chased off by my guide. I can see why my driver suggested getting the guide!

We head up to the succession of water tanks are and watch with jealousy all the local youths jumping and playing in the water. There are seven of them of differing sizes and it is considered auspicious to swim in them. We keep heading up til we reach the monkeys – I haven’t brought any bananas but my guide somehow finds one and makes some great friends in the tribe of monkeys that surround him. As soon as they realise that he has run out, and I do not have any, they quickly lose interest.

We head back down and a holy man is talking to a small group of other tourists and beckons me over and asks if I would like to see his temple. I look over at my guide who shrugs and when I head over to have a look around my guide bids me farewell and heads off to where I first saw him. Somewhat surprised by the lack of a shake down I follow the other tourists and the holy man (who is in his 20s at most) and head into the temple.

He keeps an amusing line of patter and leads us further into the temple complex. He leads us to a shrine and bids us sit down, and offers to make a mark on our forehead with paint or dye. One of the other tourists says no, but the other couple does, and I cant see the harm so I do too.

As soon as he’s done so he indicates that we should put some money in the shrine for luck. As the other tourists do so he looks expectantly at me and I tell him quite plainly that I’m not going to be doing that. He looks as to insist so I shrug my shoulders and leave. I make it back to the car without further incident and tell my driver to take me back to the hotel.

When I get back to the hotel I get a call from Julia, a Canadian tourist I had met in Ranthambor. She had also gone on to Jaipur and I had given her my details with the offer of a swim in the pool. She agrees to come by and arranges a tuk-tuk from her hotel. She swings by and we cool off in the pool and then have dinner in the restaurant. She’s not overwhelmed by the ITC but she’s appreciative of the pool as her hotel doesn’t have one. We have a good old chat about her travels and son back home and by then dusk is approaching so she heads off before it gets too dark.

The next day I checked out and got my driver to take me back to Delhi. On the way there he tried to talk up the trip we had made in order to get a good tip. He started with I’m a safe driver. Well you did manage to avoid all those head on collisions, I allowed. His smile grew bigger. I had noticed that whenever an overloaded truck had swerved into our lane as part of an ill-advised overtaking manoeuvre, my driver had always been watching my reaction. I continued but you did hit that other car at the toll booth.

His smile faltered. He had merged aggressively at low speed into a queue at a toll booth and had hit the guy in front while travelling at maybe 2mph. He and the other driver had got out to investigate the damage and muttered at each other but I doubt there was much more than a scuff. It certainly derailed his argument though. I made sure to give him a 10% tip when we got to Delhi though, which seemed to make him happy.

I don’t think I would – Jaipur for me was only on my trip because Rajastan is more efficiently done as a triangle, and the best part for me was catching up with my brother. I did get to ride on an elephant though!

Previous: Tiger Safari in Ranthambor | Part of Trip: Pollution & Tigers | Next: Last Post in the Trip 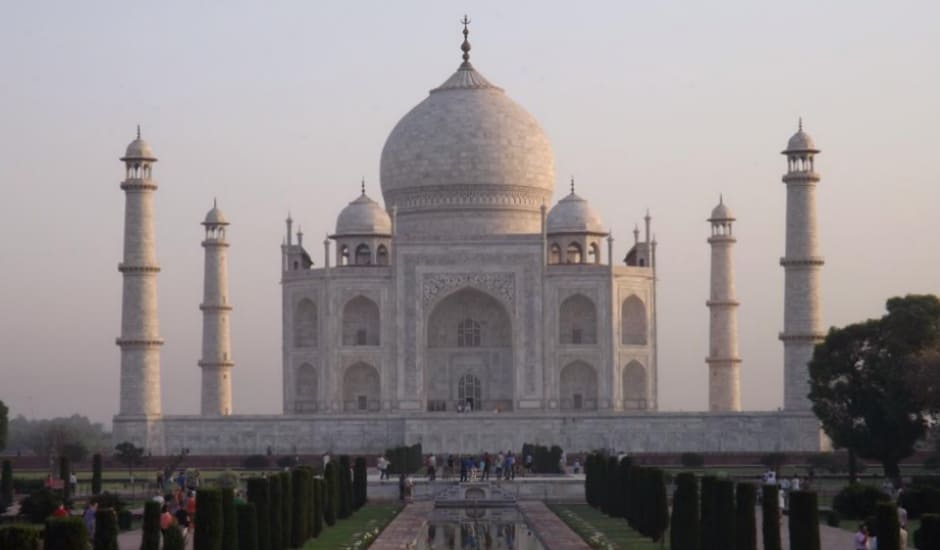